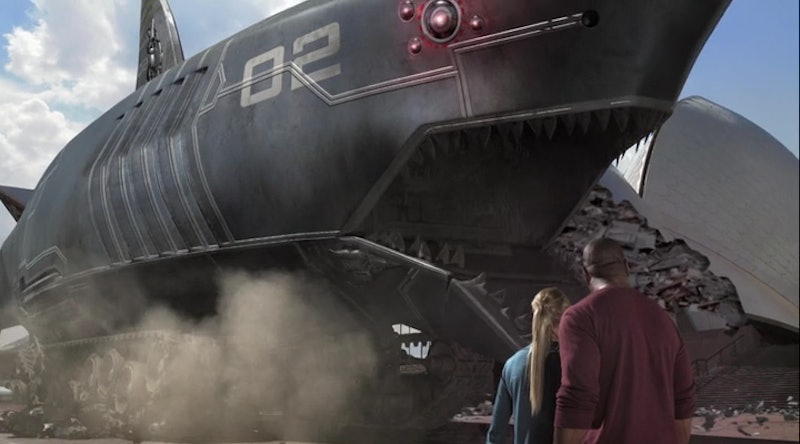 I don't understand a lot of things about this world — people putting ranch dressing on pizza comes to mind — but what I do know is that campy movies about terrifying-yet-ridiculous sharks will continue to be made whether people are asking for them or not. (Spoiler: they're not.) Syfy's monster-disaster film Mega Shark Versus Mecha Shark is one of those said pieces of work. And although it already came out on DVD back in January 2014 — that's right, it never made it to the big screen — it's making an appearance on the Syfy Network on July 26 along with a seemingly neverending lineup of shark-themed movies.

So what exactly is Mega Shark Versus Mecha Shark? Well, first of all, it's the third peg in a series of of movies about "Mega Shark." It follows in the footsteps, er, strokes, of Mega Shark Versus Giant Octopus and Mega Shark Versus Crocosaurus — and just so everyone knows, a "crocosaurus" is a 150-foot crocodile. In the third installment, Mega Shark faces it's fiercest competitor: metal. According to the film's logline, "when a new Mega Shark menaces mankind, the government unleashes the top-secret Mecha Shark to defeat the monster in a pitched battle that threatens the planet." Dun, dun, dun. But most importantly, Debbie Gibson stars in the film, so yeah, that's a thing that happened.

Like one would expect, the film did not receive favorable reviews, or rather, hardly any reviews at all. (Wait you mean the opening scene where the monster shark destroys the Sphinx in Egypt didn't get it an Oscar nod?). However, it did get points for being somewhat enjoyable to watch given that it's a B-maybe-C movie. Ed Blackedder from Influx Magazine said the film is "as dumb as a box of rocks but better than average and very entertaining." Not too shabby, amiright?

But I have a really important question: what's going to happen if Mega Shark comes back for a fourth go-around? WHAT WILL IT BATTLE NEXT? I mean, it's already gone head-to-head against a giant octopus, a crocosaurus, and a full-size metal replica of itself, so what could the writers possibly think of next? Good thing for them, they've got me to inspire them. I've come up with three possible competitors that could match up against the infamous shark:

Maybe Clifford will befriend the shark and show him that he has a heart and that fighting people is mean.

Will there be singing? Will the shark tell Bieber he's being a tool? Or will they get tattoos of their mom's faces on their backs? No one knows.

Obviously we all know Cersei will make the shark melt in his own pool of insecurities before she even lifts a glass of red wine to her lips.

(I'm crossing my fingers for the Justin Bieber one, and I don't even know why.)

More like this
You Can Thank Spider-Man For The Meme-ification Of Movies
By Dana Schwartz
What’s New On Netflix: A Victoria Justice Rom-Com & The Return Of David Letterman
By Arya Roshanian
Lisa Marie Presley Reviewed Baz Luhrmann’s ‘Elvis’ Movie On Twitter
By Grace Wehniainen
Elizabeth Olsen's Chris Evans Friendship Update Was Accidentally Hilarious
By Grace Wehniainen
Get Even More From Bustle — Sign Up For The Newsletter