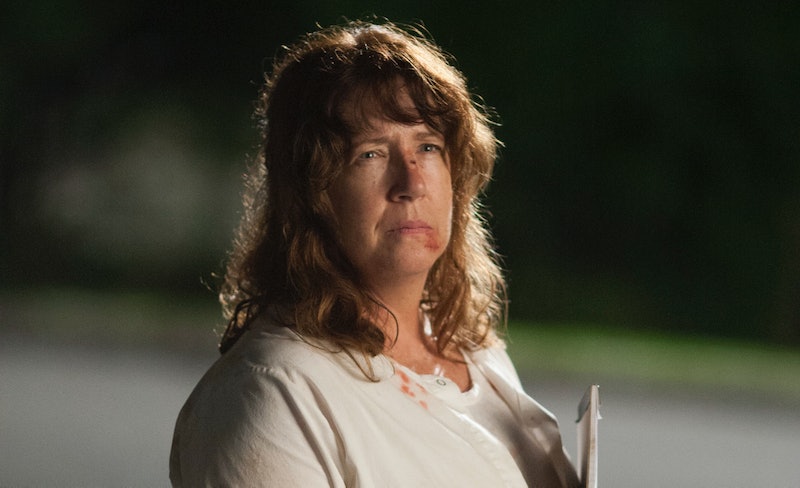 Let's face it: the Guilty Remnant is nobody's favorite group of people in the fictional town of Mapleton, New York. The members of the mysterious cult in HBO's The Leftovers never talk, they're always smoking, and they relentlessly stalk people around town. It's understandable that people occasionally yell at them or shove them to the ground. But the citizens of Mapleton are about to step up their game. And somebody's going to get very, very hurt.

The brief description for this Sunday's episode mentions that "a vicious hate crime tests Laurie's resolve." Given that Laurie is a member of the Guilty Remnant, it's safe to assume that said hate crime is perpetrated against a member of the cult. And given that the episode's title is "Gladys," a GR member played by Marceline Hugot (30 Rock's Kathy Geiss), we can probably predict who will be on the receiving end of the foreshadowed brutality.

This won't be the first time we've seen violence committed against the white-clad chain-smokers. The series premiere climaxed with a full-scale riot instigated when the GR crashed a Heroes' Day celebration. Though the cult members didn't fight back, that didn't stop the Mapletonians from bruising and bloodying them. We've seen people throw bricks, drinks, and rocks at the GR. Heck, we've even seen our show's nominal protagonist, Chief of Police Kevin Garvey, beat one of them to a pulp.

So what finally tips the scale from occasional bouts of violence into a full-fledged hate crime? How far will the hate crime go? And who's responsible for it? We'll get the answers to the first two questions on Sunday, but the latter will likely remain shrouded in mystery for at least the majority of the season. Thankfully, we have source material to consult... and the answer is utterly shocking.

Poor Gladys will indeed be the receiving end of the vicious crime. Just like the attack Reverend Jamison witnessed in the third episode, this one involves rocks — but a lot more of them. We know from pictures of the upcoming fifth episode that Gladys is kidnapped, duct tapped to a tree, and stoned to death. But who could commit such a heinous atrocity? Someone who lost a loved one to the cult, like Meg's fiancé Darren? A couple of the stoned teenagers from Jill's clique, acting out a dare from their psychotic iPhone app? Just a random citizen venting his or her anger at The Departure? The truth of Gladys' demise is actually much stranger than any of those possibilities, if the series follows the book.

In Perrotta's novel, Gladys is murdered by her Guilty Remnant cohorts, and she will be but the first in a series of sacrifices made by the cult. In Perrotta's novel, the Mapleton police think a killer is targeting GR members, but in reality they're killing each other — willingly. Every once in a while, GR leader Patti assigns one pair to carry out the most sacred of their sacraments: one of them must kill the other. Laurie's plot in the novel culminates in her being ordered to kill Meg. Though Meg encourages her partner to do it and eagerly anticipates her deliverance, Laurie can't go through with it. So Meg kills herself.

It will be interesting to see how quickly (or slowly) showrunner Damon Lindelof will choose to unspool this revelation and reach the climax of Laurie and Meg's story. Will the season end with Meg's suicide? Or will they prolong her story another year? After all, Liv Tyler is the biggest name in the Leftovers roster, so it would be shocking to see her killed off so soon. (Then again, look at what Game Of Thrones did to Sean Bean.)

However soon the show arrives at Meg's death, she's about to take her first definitive step in that direction. The description for "Gladys" also teases how "Meg assumes a new role." And the promo for the upcoming episodes shows a glimpse of her in the GR's all-white uniform for the first time, holding a pad that reads "I'm ready." It's clear that Meg has finally committed 100 percent to the cult — and that's a decision that will lead inexorably to her doom.

Watch the promo that showcases Meg's commitment and the violence against the Guilty Remnant here: