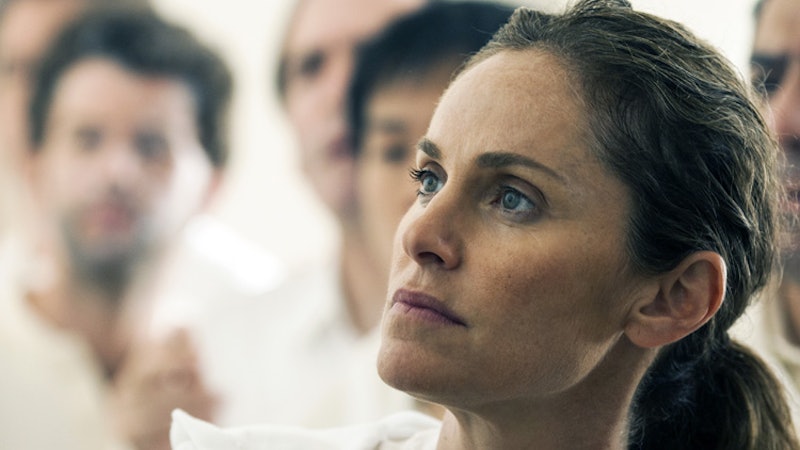 Few things have inspired as much speculation and debate on HBO’s mysterious new drama The Leftovers as the Guilty Remnant. And that’s saying something for a show that also includes a Rapture-like event where millions of people disappeared into thin air, a cult leader who has the ability to hug people’s pain away, and a magical toaster that vanishes and un-vanishes bagels at whim.

Leftovers showrunner Damon Lindelof knows a thing or two about mysteries, having also helmed a little sci-fi show over on ABC for six years. His experience with Lost has clearly influenced his work on HBO. There are many clear parallels to be drawn between the two shows: Leftovers has Raptures in place of plane crashes, hallucinogenic deer instead of marauding polar bears, and people trapped within their own grief rather than on an omnipotent island. But other than that, they’re pretty much the same show. (They’ve even both got protagonists with severe daddy issues.) So does that make the Guilty Remnant the Leftovers equivalent of The Others?

The two groups do have a lot in common, when you think about it. They both wear uniforms (the GR with their all-white, the Others with their jungle-savage costumes); they both have mysterious leaders (the GR’s silent Patti, the Others’ nefarious Ben); they both abduct people to their side (or “recruit,” as the GR would prefer to call it); and they both inhabit surprisingly suburban settings.

Another thing the two groups have in common? Frustratingly murky motives. Were the others serving Jacob? Or the Man In Black? Or just Ben’s own ambitions? Is the GR brainwashing its members? Or providing them with relief from from their grief? Thus far, those who have only watched the HBO version of The Leftovers have very few clues to go on, other than that the GR has an affinity for smoking, sharpies, and chopping down trees.

It would be easy to assume, since the show takes place in the aftermath of a Rapture-like event, that the GR is a Christian cult that’s awaiting the Second Coming. Most cults are religious, after all — whether they’re worshipping flying spaghetti monsters or men who give really great hugs. But the GR is different. They’re not worshipping. They’re reminding.

Confused? Let’s go to the source material for clues. In Tom Perrotta’s novel, the Guilty Remnant is formed soon after the Sudden Departure by people who believe the inexplicable event signaled the end of the Old World and that those who are going on living their “normal” lives are in denial. In their eyes, the Departure changed everything, and only they have made the necessary adjustments to live in the New World. Here’s how you can recognize a member of the GR:

In the novel, GR members are known to pass out cards that read: “We are the Guilty Remnant. We have taken a vow of silence. We stand before you as living reminders of God’s awesome power. His judgment is upon us.” Though they do mention God and openly believe a higher power is responsible for the Departure, they would balk at being labeled as “Christians.” This and other mysteries are addressed on the FAQ page of the organization’s “official website”:

Are you a cult?

No. We are members of a grass-roots movement. And we would love for you to join us.

What’s with the name? What are you guilty of?

God judged us on October 14th. If we weren’t guilty, we wouldn’t be here.

Labels belong to the Old World.

Why do you smoke so much?

We smoke to proclaim our faith.

But smoking’s bad for your health.

God’s judgment is upon us. We don’t expect to be around for very long.

Why the Vow of Silence?

Because talk is cheap, and we’re tired of wasting our breath. The New World demands action.

Why do you people always travel in pairs?

To remind ourselves that God is watching. We’re never really alone.

Do people join and then leave?

Hardly ever. The Old World is over. Why would you return to an illusion?

Once you understand the purpose behind all of the GR’s seemingly bizarre behavior, the organization actually starts to make an odd kind of sense. Who’s really crazier? The citizens of Mapleton who go about their lives as though 2 percent of the planet’s population didn’t just vanish into thin air? Or those who admit that the world has changed forever and find solace in a community of like-minded individuals? It’s an interesting question, and one that Leftovers is sure to continue to probe as the series goes on.