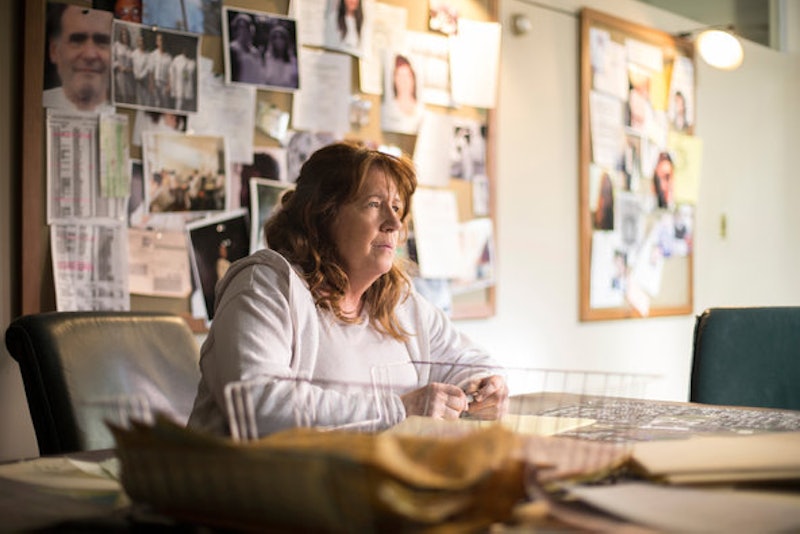 She hasn't said much on HBO's new mystery-filled drama The Leftovers — in fact, she's probably said less than Game of Thrones' Hodor has ever said — but actress Ann Dowd, who plays Patti Levin, the mostly-silent "don't mess with me" leader of the GR (Guilty Remnant), brings a quiet ferocity to the show that constantly inspires questions that may never be answered. And although you'd think that someone who never has answers for the audience, and who just creates more questions, would be ultimately viewed as annoying, that shred of annoyance slips away as soon as she gives us a wink that signals that she knows more than we do. And aren't we all a little mesmerized by those who have secrets we want to hear?

The thing about Dowd is that she has a way of making you feel things just with the way she moves. Whether she's passive-aggressively writing in all caps in a notebook, dropping said notebook to the floor to let someone know she's disappointed in them, or speaking without moving her lips, she makes you feel a flood of emotions. And she doesn't just make you feel slightly annoyed; she makes you feel angry and frustrated like how you'd feel after an hour of your older sibling ignoring you; she makes you feel little for not knowing what she knows; and she makes you feel like you owe her your time. (Makes sense why she's basically the leader of a cult, amiright?).

Of course, The Leftovers isn't the first time Dowd has had a chance to completely own the screen (or the stage). Take a look at a few of her other on-screen roles that have left us feeling all of the feels:

That time she played Kim Kelly's mom in Freaks and Geeks.

So Kim Kelly (Busy Philipps) has the worst attitude ever in Freaks and Geeks, but after we got to meet her mom, every ounce of resentment and hatred you had for Kim disappeared and went directly towards Cookie Kelly. We then understood why Kim turned out the way she did, and why it really isn't her fault that she's a total bully. Never forget their lovely mother-daughter banter:

Cookie: Kim, did you pick up any soda?Kim: I forgot.Cookie: Yeah? Well I forgot to make your dinner. How d'ya like that?

That time she played The Yellow King's sister in True Detective.

"You wanna make flowers today?" Um, no thanks. You may have forgotten, but Dowd played Betty Childress in True Detective, you know, the woman who had an incestuous relationship with her murderer of a brother. Her character left you feeling hopeless and deeply sad. Always great emotions to feel.

That time she won an award for her role in Compliance.

Yikes. This indie film, which garnered Dowd an award from the National Board of Review, takes a look at a hapless fast-food restaurant manager (Dowd) who goes to extreme measures when a supposed cop calls her and lets her know that one of her female employees stole money. Although she believes that she's only doing what's right, her character makes you feel shocked and appalled at what one human being can do to another just because a figure of authority says it's okay to do so.

That time she played a loving veterinarian in Marley and Me.

Okay, this one is a cheap shot, but it still doesn't take away from the fact that Dowd was able to play a supportive and sympathetic veterinarian who helped a sad Owen Wilson cope with the end of his dog's life. (Also, seriously don't watch the above video if you're not in a mood to cry. Seriously.)