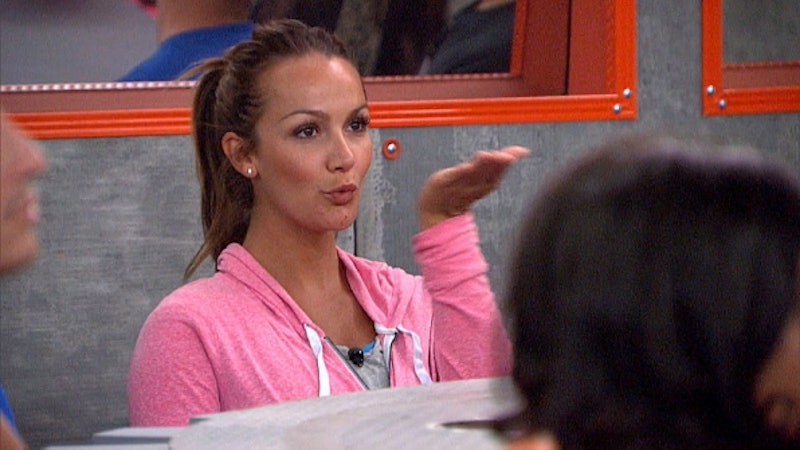 We are told to expect the unexpected in the Big Brother house, but if that is the case, why has every single eviction been so expected? Every week since the beginning of the season, the nominations that remain on the chopping block post-Veto ceremony all have one thing in common, there is no question which one of them is going home. Come Thursday's live eviction, in which Brittany is definitely going to be eliminated, there is no surprise. The campaigning is usually weak the days prior to Thursday because they have lost hope, they just don't have that Big Brother fight in them that they all entered the house with. For most of the evicted houseguests this far, that's okay, their absences haven't been felt all that much. Paola, who was evicted Week 2, is the only one I miss from the house, and that's because she and Donny were BFF, and I wanted to watch them hang out all summer long.

The trend continued this week, as Donny and Brittany are nominated for eviction, but the entire house knows that Brittany will be walking out the door Thursday. In fact, they've known that since Monday, after Donny was replaced as the nominee. So is the house going to really miss Brittany? In a word, no. In fact, there are four major reasons it is okay that Brittany is going to be evicted on Thursday's show:

She thinks she deserves to be there more than others

Nope. Just nope. The kiss of death in the Big Brother house is when you go around and start telling everyone that you deserve to be there more than other people. I understand that Brittany has three children who are at home without their mother right now, but it was her choice to enter the game and telling people she "gave up more than anyone else" to is not going to fly with the other houseguests.

She isn't that smart of a player

We're not losing the best Big Brother contestant to ever exist this week. I will give props to Brittany for trying to campaign for herself, most people this season have essentially laid down and waited to be rolled out of the house, but she is NOT going about it the right way. If you think that playing a good Big Brother game is going around and naming FOUR people who you're going after, all of which have some type of connection with those you're campaigning to, you don't deserve to be in the Big Brother house. Yeah, I went there.

This goes along with the "she deserves to be there more than other houseguests," but has a twist of even more annoying. When Brittany was nominated next to Victoria it was the worst thing that could have ever happened to her, at least that's what she made you think. She couldn't believe how disrespectful it was for her to be nominated next to a player like Victoria. Turns out a player like Victoria went ahead and won the Veto, so I guess she isn't half bad — right, Brittany?

The houseguests decide, to be fair, that they would all draw straws or pick a number to decide who will have to sleep with Victoria. According to Frankie, she hogs all of the covers. Don't we all. Anyway, Nicole volunteered to sleep with Victoria, saying, "I don't mind it at all, she doesn't bug me." A nice offer, but maybe it could have been done in different presence, as it was said directly in front of Victoria. This really pissed Brittany off, as she saw it as Nicole calling her out. Brittany thought it was worth pulling Victoria aside and making the situation a much bigger deal than it had to be. All I'm saying is, poor Victoria.