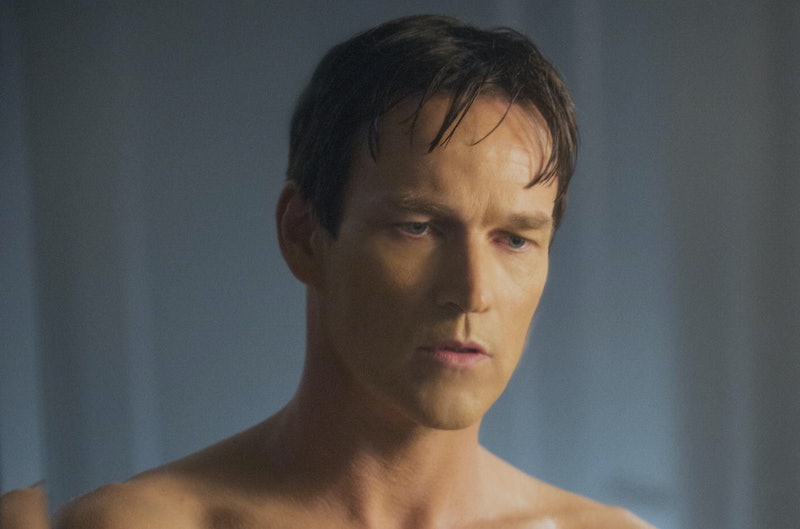 Bad news for True Blood's Sookie/Bill shippers (if there are any of you left out there): Bill's come down with a bad case of Hep-V and not only is it incurable, but it seems to be progressing at a much faster rate than normal. Are you ready to say goodbye to Sookie's first true love?

The writers already hit us with a doozy when it was revealed that the presumed-dead Eric was alive... but infected with Hep-V. Now Sookie's vampire love has contracted the illness, making it a double-whammy of awfulness. Can't a faerie catch a break around here? Thanks to the promo for this Sunday's episode, we know that Bill's disease moves quickly, as his body speeds through the stages and towards a seemingly unavoidable death.

Bill may be nobody's favorite character anymore, but it's easy to remember when he was a beloved and integral part of the show, and it'll be sad to see him brought low by a glorified STD. Hopefully before he turns into a pile of steaming goo, Sookie's ex will be able to find a way to atone for his sins through one final heroic act. (Not that that would make up for Billith. Just sayin'.) Or maybe something even crazier will happen... Perhaps he'll somehow magically survive the fatal disease. Hey — stranger things have happened on this show.

Here are our theories on how Bill got infected, why it's different, and what will happen to him:

Bill got the Hep-V from Sookie.

In Episode 3, when Sookie and Bill were ambushed by the Hep-V vamps in the woods, the infected fangers were quickly dispatched by Jason, Jessica, Alcide & Co. — but not before Sookie was veritably showered in the viscera of the exploding vamps. She said she didn't get any of their blood in her mouth or eyes, and Violet quickly helped Sookie rinse off in the river. But they were interrupted when Alcide was suddenly shot in the head, so it's conceivable that some of the infected blood found its way inside her.

In Episode 4, Bill fed from Sookie to increase his strength before their assault on Fangtasia. (Although, in the same episode, Jessica notably refused to drink Sookie's blood on account of her faerie-ness and drank from Lafayette instead.) That's probably when Bill contracted the disease.

Bill's Hep-V is different because of Lilith's blood.

Perhaps the reason that Bill's Hep-V is progressing at a faster-than-normal pace is because there's a bit of Lilith's blood left in his system. Who knows how a vampire-specific blood disease would react when it meets the blood of a vampire-god? It could have all sorts of unforeseen side-effects. Of course, we've been told that Bill lost all of his Lilith blood, but who knows if that's really true.

Bill's Hep-V is different because of Sookie's blood.

More likely, though, Bill's illness is behaving strangely because it was first mixed with faerie blood before it was passed to him. Sookie herself has never even seemed to understand the full extent of her powers, so god only knows what mixing Hep-V with fae blood will do. If Sookie's special hemoglobin is indeed responsible for Hep-Bill, then that could mean all sorts of things for her former lover:

How ironic would it be if Sookie is ultimately responsible for the death of her own "endgame"? Perhaps the only effect Sookie's faerie blood will have on Bill will be to speed him even faster towards his doom. What if Team Bon Temps is about to stumble upon the cure for Hep-V, but Bill just misses out on it because he dies too quickly? That would be a hilariously bummer ending for a character most viewers have grown to, at best, tolerate (and, at worst, loathe).

But knowing True Blood and its pro-Bill writing staff, Sookie's magic blood will probably cancel out the Hep-V and Bill will be totally fine. Sure, the vampire will probably feel pretty sick for a while, but that'll just be because the faerie blood is quickly burning through all the Hep-V in his system, until there's none left. Then Bill will be saved! Hooray?

*record scratch* Yeah, you read that right. It seems crazy, but hear us out: We already know that Sookie's blood can give vampires the ability to daywalk. Essentially, her blood makes them a little more human. So Sookie's faerie blood will combine with the toxic Hep-V and create a mumbojumbomagicpotion with a very unanticipated result: it turns vampires into humans again. So all infected vampires can cure themselves of the disease if they're willing to give up their supernatural powers — some will make the choice (Bill) and some won't (Eric). That will be the final arc of the show. Aaand we just won True Blood.

More like this
David Schwimmer Doesn't Remember This Classic 'Friends' Episode
By Sam Ramsden
Conversations With Friends' Endometriosis Scenes Are As Brutal As It Gets
By Ivana Rihter
50 Years After Creating Her Alter Ego, Angelyne Is Still Driving That Pink Convertible
By Gretchen Smail
'Atlanta' Season 4 Could Be Here Sooner Than You Think
By Kadin Burnett
Get Even More From Bustle — Sign Up For The Newsletter