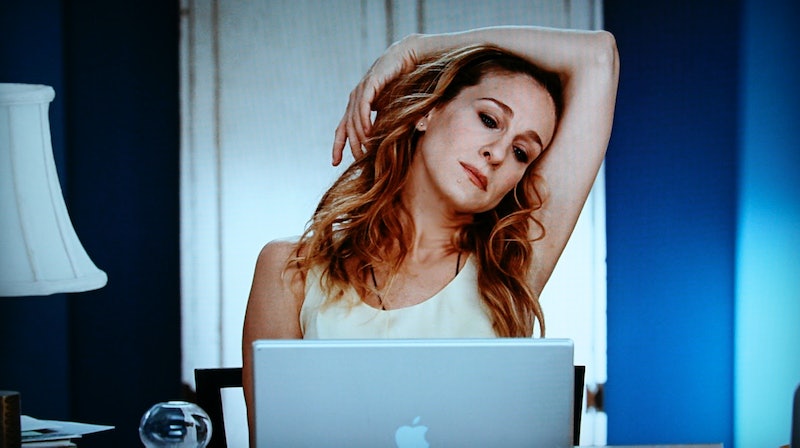 We’re always hearing that we could be having better sex, a better orgasm, or a better relationship. But how often do we hear the nitty-gritty of how we can actually better understand our deepest desires and most embarrassing questions? Bustle has enlisted Vanessa Marin, a licensed sex psychotherapist based in San Francisco, to help us out with the details. No gender, sexual orientation, or question is off limits, and all questions remain anonymous. Now, onto this week’s topic: How asking for what you want in bed can backfire .

Q: I’ve read before about the importance of asking for what you want in bed. I’ve always asked for what I want, but my boyfriend can sometimes get super frustrated when I tell him. He says I’m being pushy and sometimes mean, but I say I just know what I like. What gives?

A: We’ve all heard that stating our wants is a crucial sexual communication skill. And it’s true — it is! It’s up to each of us to take responsibility for our own pleasure and fill our partners in on what we’d like from them. I've written plenty about how to give directions during sex — and let me be clear — it is an essential skill. You absolutely should advocate for what you want in bed.

Here are five ways that you may be going about asking for what you want in a way that isn't sensitive to your partner — and thereby sabotaging yourself.

I’ve noticed that some people seem to believe that the fact that they stated a want means that it should be fulfilled immediately and without question. I once read a case where a man was annoyed that his partner wouldn’t give him 45-minute blow jobs whenever he asked for them. He thought that part of being in a relationship with him meant satisfying his every whim.

This kind of entitled attitude isn’t going to get you very far with your partner. Remember, a big part of asking for what you want is asking. You don’t want your partner to feel forced or bullied.

One way to counter entitlement tendencies is to express appreciation for your partner’s efforts. You should also make sure that you’re paying an equal amount of attention to your partner’s wants, and spending time and effort making sure they’re satisfied too.

Sometimes, you need to give some details about what you want, like saying “just a little bit softer” or “squeeze tighter." It’s great to be aware of the nuances of what you like.

But getting too specific can be frustrating to your partner, especially if you’re making your requests in an unkind tone. One woman I worked with told me, “my boyfriend is so clueless. I’m constantly having to adjust my directions, and then I get so fed up that I tell him to stop.” I could imagine her boyfriend feeling embarrassed and paralyzed by her rapid-fire instructions.

If there’s something specific you want, make the process of teaching each other feel enticing, rather than adversarial. If they don’t get it quite right, let it go sometimes. Sex doesn’t need to be perfect to be fun!

If you could be a fly on the wall in a couples therapy office, you would overhear some pretty condescending conversations between partners. People in long-term relationships tend to stop being quite so kind to each other, especially when it comes to sex.

Usually, the condescension comes up in one of two situations — when one partner makes a mistake during sex, for example, “not like that! What are you thinking?” Or if one person is frustrated that they have to ask for something in the first place, like, “seriously, do I have to tell you again that I need more foreplay?”

It should go without saying, but make your requests kindly and respectfully. Remember that your partner is a person, and one that you actually might even love! If your boyfriend messes up, gently redirect him without insulting him. If you find yourself repeatedly having to ask for the same thing, talk to him about it when you’re both calm and fully clothed.

If you’ve been in a relationship for a while, odds are you’ve had some experiences where your partner didn’t give you what you wanted. Maybe your partner was hesitant to perform oral sex, or didn’t do the most convincing job role-playing one of your fantasies.

Nagging is common in most long-term relationships, and the bedroom is by no means a safe zone. People tend to dredge up the past over and over again, and harp on each other for their mistakes.

If you want things to be different, you have to make some space for change. Don’t bring up past experiences when you’re in the middle of a sexual interaction with your partner — and don’t make snarky comments after the fact. Make sure you’re directly asking for what you want in the moment. For example, ask “Can you get on top?” during sex, rather than whining, “You never get on top anymore” after you’ve finished.

You’re not leaving any room for spontaneity

It’s great to know what works for you in the bedroom, but sometimes being very detailed and specific with your requests can suck the fun out of a sexual interaction. It can make your partner feel stifled, and sex feel robotic and predictable.

Just because you’re very clear on what you want doesn’t mean you have to do those exact things every single time. There’s always something new to explore and experiment with when it comes to sex, so don’t limit yourself! Try to find a balance between doing the things you know you like, and trying out new things. And allow your partner some creative freedom.

If you think you’re avoiding all these pitfalls and your boyfriend still isn’t willing to hear out what you want, you may want to consider whether this is the right relationship for you. Your boyfriend might not be mature enough or respectful enough to be in a relationship with a woman who is confident with her desires.