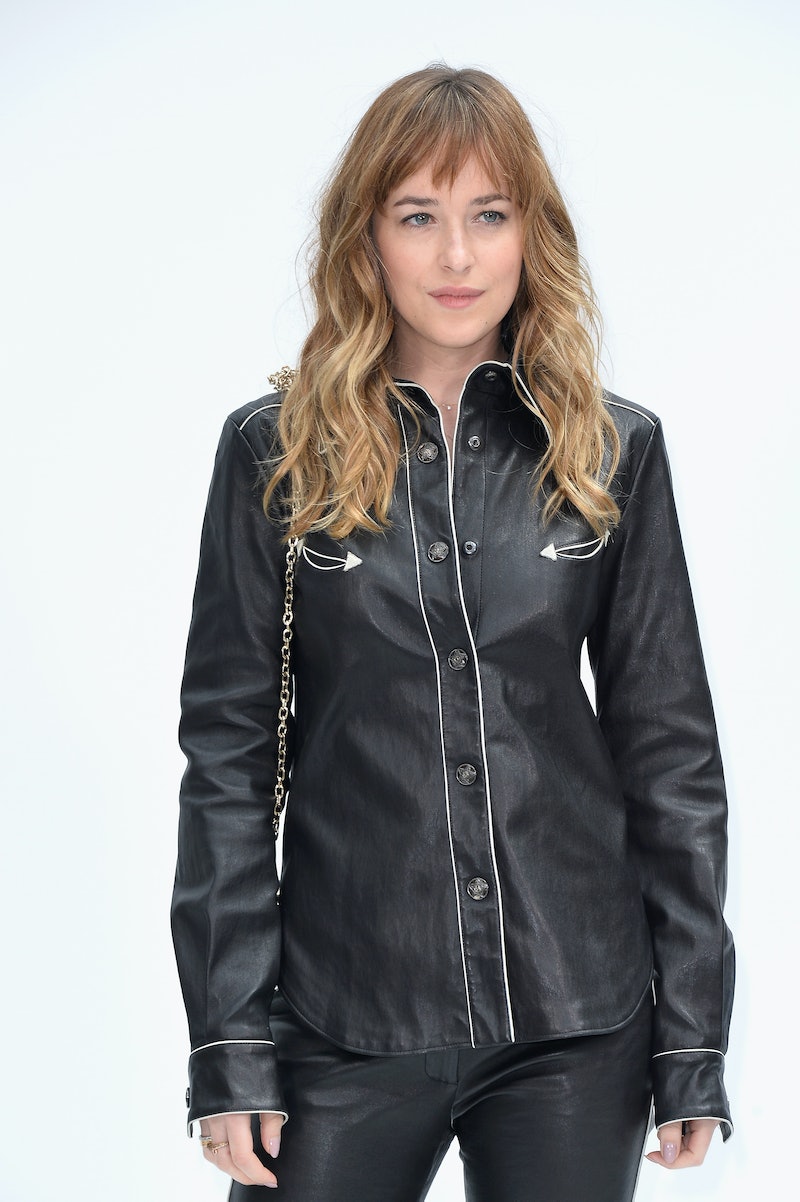 You've seen it. I've seen it. We've ALL seen it. The Fifty Shades of Grey trailer was released on Thursday and it is... I guess it's exactly how you'd expect it to be. There's a ton of flirtatious glances and sex stuff and a giant office that is, really, just irrationally large. But aside from that, the trailer was also, for many people, an introduction to actress Dakota Johnson. Of course — to I assume many Fifty Shades super-fans disappoint — Johnson and Jamie Dornan (the Christian Grey) are not actually together. So who is Dakota Johnson dating in real life? According to Us Weekly, it seems Johnson is dating Matthew Hitt of the band Drowners. Or they just like walking around New York City hand-in-hand, one or the other.

On Wednesday, the maybe-couple was spotting walking around New York's East Village neighborhood. If I had to guess, I'd say she was enjoying her last day of freedom before the trailer came out and a Twilight level of obsession broke out across the nation. (Except from adults instead of teens which... weird.)

Clearly, Johnson's career is about to really take off, but what about Hitt? What's his band like? Where's he from? Is he worthy of Anastasia Steele herself? Here are a few facts about Hitt so when (if) they end up hitting up Fifty Shades of Grey premieres come 2015, you'll already know all about him.

Hitt moved from Wales to New York City to pursue a modeling career.

Saw that one coming, didn't ya? The whole move-to-NYC-and-become-a-model thing seems to have worked out pretty well for him. He's modeled in ads for Gucci, Band of Outsiders, and All Saints.

He hung out with Harry Styles

Uh... don't need much explanation for that one.

There is an entire Tumblr dedicated to Hitt. According to the site, it is no longer being updated, but there are still a TON of Matthew Hitt photos to be found there if you're interested.

He's in a band

Hitt is the lead singer and guitarist for Drowners which formed in 2011. They released their first album in January.

He's a songwriter too

Hitt wrote and composed all of the album's songs.

Want more Matthew Hitt? Check out his Instagram. He seems to update often, and while they aren't any pics of Johnson yet, maybe they'll pop up soon. Maybe he'll even post the Fifty Shades trailer. There's nothing cooler and less awkward than watching the person you're dating having sex with someone else on film...

More like this
Colin Firth Revealed His Favourite Mr. Darcy (& No, It's Not Himself)
By Sophie McEvoy
'Doctor Who’s New Star Is Already Huge On TikTok
By Maxine Harrison
Watch The Dramatic First Trailer For Netflix's Jennifer Lopez Documentary
By Alyssa Lapid
Lisa Marie Presley Reviewed Baz Luhrmann’s ‘Elvis’ Movie On Twitter
By Grace Wehniainen
Get Even More From Bustle — Sign Up For The Newsletter