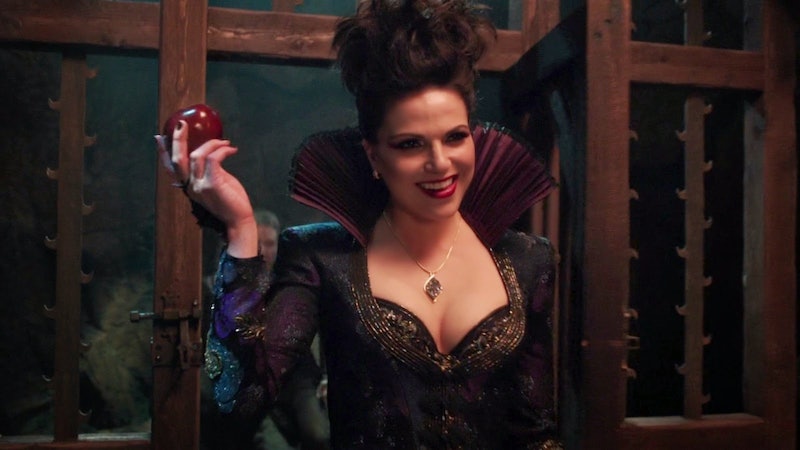 There's going to be a chill in the air on Once Upon a Time. Some of our favorite Frozen characters are coming to Once Upon a Time when the show returns this fall, and out of all of the fairytales that Once Upon a Time has borrowed from over the past three seasons, this one is sure to be a fan favorite. Sure, Frozen was a universal obsession with a killer soundtrack and adorable characters, but the real reason that Frozen fits so well into the Once Upon a Time world isn't because of any of that. Frozen took a familiar fairytale story and flipped it on its head, which is what OUAT does every week. OUAT and Frozen show there's more to the story than the black-and-white morality often displayed in fairytales, and there are two characters who encompass that more than any other: OUAT 's Regina and Frozen' s Elsa.

Regina and Elsa will officially meet in Season 4 of Once Upon a Time , but how that meeting will go is up in the air. When you think about it, Elsa and Regina are remarkably similar. Both are misunderstood Queens who would do anything to protect a beloved family member. (In Regina's case, Henry, and in Elsa's, it's Anna, who we will also see in Season 4.) It's inevitable that their similarities will cause some sort of reaction to the other — but will it be a good reaction or a bad one? There's evidence for both. Here's why:

BAD: It'll Be Like Zelena and Regina All Over Again

Oh, hey, remember Zelena, AKA Regina's older sister, AKA the Wicked Witch of the West? Things didn't go so smoothly for these two, despite sharing both DNA and a fairly similar back story. Zelena came to Storybrooke to set a time travel spell into motion, which would destroy Regina's happiness in favor of her own. Zelena felt abandoned by her mother and was jealous that Regina got all of the attention both from Cora and from Rumpel. Regina was in a similar boat when Emma came to Storybrooke and stole Henry's attention away. Plus, Regina knows what it's like to lose someone she cared about — though her great love, Daniel, didn't abandon her (her mother killed him, which, uh, is different) she could have easily identified with Zelena's loneliness and pain.

But instead of identifying with one another, Regina and Zelena were at one another's throats, fighting for power and for their own happiness. Regina and Zelena were well matched in terms of magical powers, and eventually one of them had to die to get out of the battle. Elsa is not nearly as hateful or jealous as Zelena was, but we do know that Elsa will continue to be "misunderstood" on OUAT — could that mean that she and Regina get into a magical battle, a la last season's "Wicked vs. Evil" fight? (Ice vs. Evil does have a certain ring to it.)

One of the biggest themes on Once Upon a Time is that everyone has the potential for change, which is why I'm not so sure that Regina will reenact her fight with Zelena in Season 4 with Elsa as her enemy. Right now, Regina needs friends more than ever — she just lost Robin to his formerly dead wife, and Henry is off splitting time between her house and Emma's, whom Regina is definitely not crazy about at the moment.

Elsa's in a similar boat — she's in Storybrooke for a reason, and assuming that she isn't there to colonize the town in the name of Arendelle, she might need some help from the people in Storybrooke. Perhaps Elsa needs to cast a spell that will get her back home — Regina would be the right person for the job, and the perfect person to vent to about how much it sucks when everyone thinks you're the worst. Plus, if Regina wants to fight off the "OMG my boyfriend just left must destroy someone's happiness ASAP" bug, helping Elsa out is an easy way to do it while confirming to the rest of Storybrooke that she's sidestepping the path back to evil.

Here's hoping that Elsa and Regina realize that they're basically perfect together, just like this OUAT/Frozen mashup proves.