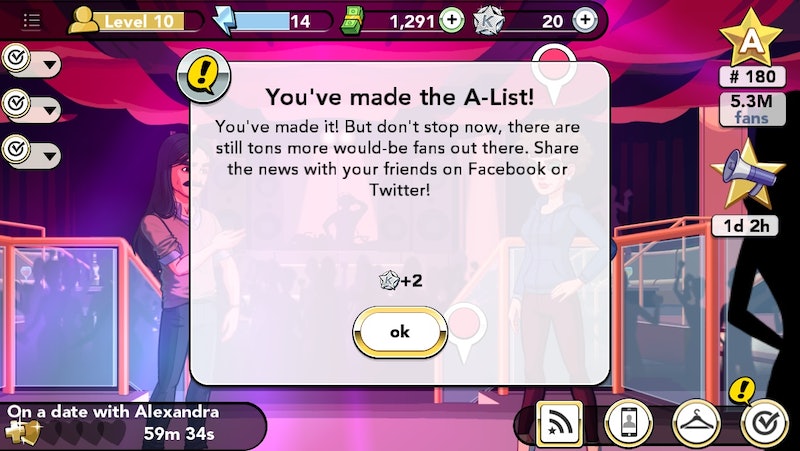 If you haven't played the Kim Kardashian iPhone game for every minute of your waking day like I have, congratulations on maintaining your dignity. Secondly, the time spent in the real world instead of the digital one means you might not yet be an A-list star. But not to fear, that's easily remediable. The way you advance from E-list to D-list to C-list and eventually the coveted Kim Kardashian level A-list is by gaining fans on your in-game Twitter account. So what's the easiest way to gain fans in Kim Kardashian: Hollywood? There are a few ways and if you employ all of them at once you can skyrocket through the rankings until you nab that number one spot.

Of course you're only allowed to gain 68.8 fans before the game won't let you get anymore, but hopefully like with the time the game crashed, Kim will eventually remedy that as well. Although I guess I should be happy because that's like 10 million more fans that Katy Perry has and she's the most followed person on Twitter. I surpassed Kim Kardashian's meager 22.3 million fans like a thousand years ago.

Because I want to help you become more famous than Kim, too, here are my eight expert ways to get more fans—fast.

GET FIVE STARS ON PHOTO SHOOTS

If you hit five stars during your gig you'll get more fans when the media feedback comes in. If you do poorly on photo shoots and only get one or two stars you'll actually lose fans. Try to get at least three stars for a mediocre number of fans, and aim for five if you want to see those numbers shoot up!

HOPE KIM KARDASHIAN TWEETS ABOUT YOU

Kim is pretty conceited in this game, (shocking, I know) so she's set it up where anytime she tweets about you or your projects you gain a ton of followers. There's no way to make Kim tweet about you, but it's always a nice surprise when she does.

I bought the beach house in Miami for $6000 and also one in Punta Mita for $8000. (I sound like such a douche right now, my goodness.) Both of them got me written about in the tabloids and a ton of fans.

Much like Kim's life, when you wear a new outfit it gets you noticed and written about. High-end, high price clothing is probably your best bet if you want to gain a bunch of fans. I haven't changed my hair color yet, but that might do the trick too if you go for one of the more expensive colors.

As if you weren't already addicted enough, Kim actually punishes you if you don't play the game. I've never experienced this first hand because I play way more than is healthy but according to people on Twitter, not logging in for a few days drops their fan count significantly.

I feel like this is teaching me some sort of lesson about fame, like if you don't keep yourself relevant you die a social death or something. That would explain all the Kardashian stunts the family pulls to stay in the limelight. (Yes Kris Jenner, I'm talking about your weird topless selfie with your daughters.)

DON'T TALK SHIT ABOUT WILLOW TO THE MEDIA

Once I was given an option to comment on my in-game enemy Willow Pape and I chose to "rant about her" because I was talking to a Ryan Seacrest knock off. I figured that celebrity feuds are always good publicity, right? Wrong! The tabloid journalist painted me as a psychopath and then Willow chimed in and I lost a ton of fans. Answering "no comment" will get you the same reaction. The rule to the media is to be cordial, but dismissive of Willow Pape.

DO TALK SHIT TO WILLOW'S FACE

While you shouldn't badmouth Willow to the paparazzi, you can trash talk her to her face all you want. One example I have is when I chose to throw a drink at her and she got kicked out of the club for supposedly instigating the fighting. I gained a ton of fans and Willow looked like a fool. Hah! (Yes, I am taking this way too seriously. But I'm in too deep to stop now, so I've decided to embrace it.)

Apparently Kim Kardashian is a fan of sleeping your way to the top because she encourages dating famous people to gain more fans. Maybe she's making fun of herself or maybe she's even taking a dig at ex Kris Humphries. But either way, the higher up the rankings list you date, the better you do.

Good luck on your rise to stardom!