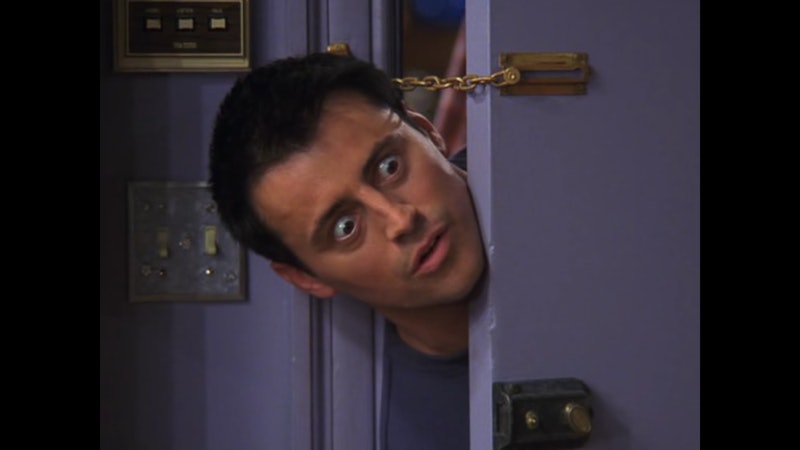 On Friday, July 25, Matt LeBlanc turns 47. This might not seem like that big of deal, but take a moment to let the fact that JOEY TRIBBIANI IS ALMOST 50 sink in. With Friends re-runs on every night, it's hard to come to terms with the idea that the actors behind Rachel, Joey, Ross and the rest are now 20 years older than the characters they played for so long. And then you hear about Lisa Kudrow's kid starting high school, or David Schwimmer going gray, or Matt LeBlanc turning 47, and it's a painful reminder that our beloved Friends are all grown up.

That doesn't mean those of us still obsessing over the beloved TV show can't pretend it's not true, though. Whether it's watching those re-runs, loving any reunions, or reminiscing about our favorite moments, it's easy to pretend that Friends is still as alive as ever — especially when you head over to Youtube. Thanks to the site, all of the best moments from the show are accessible with a single click, and on occasions like an actor's birthday, they make celebrating a lot more fun. So, in honor of LeBlanc's big day, a look back at 12 of the best Joey moments from Friends:

The One Where He Wore All of Chandler's Clothes

"The One Where No One's Ready" is one of Friends' all-time best episodes, and Joey's spot-on Chandler impression — "could I be wearing any more clothes?" — is a definite highlight.

The One Where He Ate the Whole Turkey

But still had room for dessert, because come on, that's not even a question.

And the One Where He Got it Stuck On His Head

Either funny or terrifying, depending on who sees it.

The One Where He Tried to Speak French

The One Where He Drank All the Milk

The one where he spilled all the milk down his shirt is more accurate, but you get the point.

The One Where This Photo Happened

Basically, you're either a Joey or you're a Chandler.

This was really over several episodes, but it had a high point in "The One With Ross' Sandwich."

The One Where He Found His Identical Hand Twin

Only to discover that that actually meant nothing, but still. It was a very special moment.

The One Where It's a Moo Point

The One Where He Wrote the Reference Letter

In one of Friends' sweetest moments, Joey wrote a reference letter for Monica and Chandler's adoption portfolio. The only problem was that the people at the agency thought it was written by an elementary schooler, but hey, it's the thought that counts.

The best use of slow motion in all of Friends history.

The One With The Game Show

Because it wouldn't be a proper Joey list without "paper! Snow! A ghost!" One of Friends best moments ever, and a personal best for Joey Tribbiani.