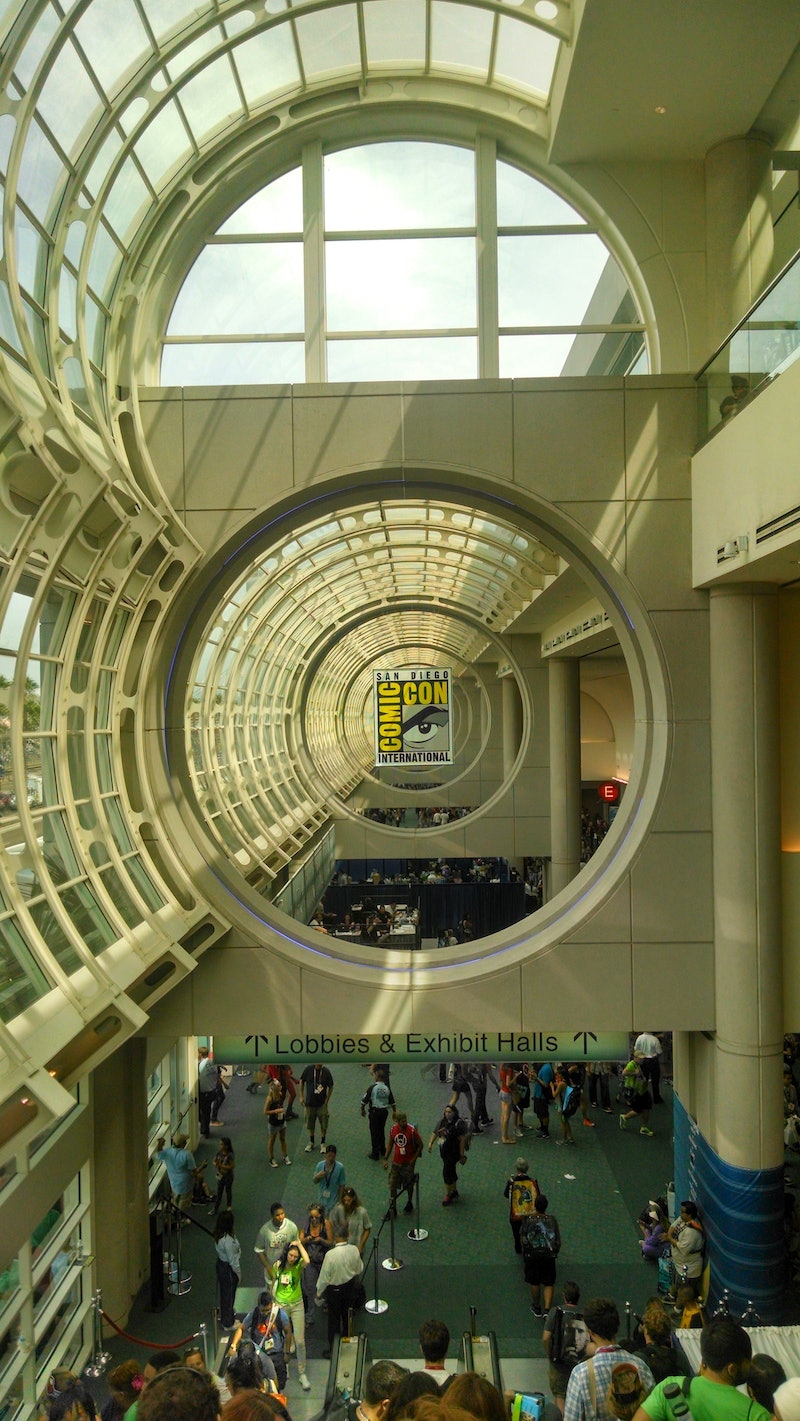 Comic-Con is insane. Let's just get that straight right off the bat. To call it massive, a understatement. Vast? Haha. It is a never-ending cavalcade of what I can only call a veritable Nerdi Gras. And this year, for the first time, I finally experienced the madness first-hand. What was it like, to head to San Diego for the biggest nerd convention the planet has ever seen? Unfriggenbelievable, overwhelming, insane, and a trip.

I'd prepared for my Comic-Con experience through the experience of others. "Bring hand sanitizer," said most. "Nose plugs," joked a few others (4 days of body order, even inside as big a room as the convention center, gets ripe after a time). And protein bars were number one atop every single fellow writer/reporter's list — because hoo boy, did you never stop going once you got there (to say nothing of the really dumb price-gouging). But mostly, they said: just give into it. Let the nerdery wash over you, embrace the geekiest bits of your own tendencies and just enjoy the ride. So I did. In fact I dare say that I rode Comic-Con hard and put it away wet (sorry, is that gross?). But it probably did just about the same amount of damage to me, too. (If you could hear my voice now you'd think I was a 6-pack-a-day mouse.)

So with a bag stuffed to its proverbial gills with hand sanitizer, snacks, batteries (for my recorder), water, and sunscreen, I made my way into the throngs of people and decided to investigate just what, exactly, all the hullabaloo was all about. And it was an overwhelming bit of madness.

San Diego Comic-Con International isn't so much an event as it is an experience. Throngs of people just spill into every empty bit of concrete and/or asphalt available, many of them covered in gewgaws or ephemera related to their favorite bit of nerd culture. It's a sea of swag bags attached to an enthused mass. Conversational snippets regarding speculation on potential comic book movie announcements, character machinations, storyline theories, and more peppered the air. San Diego, for 5 days, was literally transformed into a paradise of comic books, TV, movies, anime, gaming, and, perhaps the most notable convention trope of all, cosplay.

It was the latter thing that fascinated me most about the convention, both because it's, well, strikingly visual and also because you can tell it is truly a labor of love for all of those that partake. I could never do it but I admire those that commit — they really do look like they're having a lot of fun. I mean it's essentially Halloween-Whenever-You Want, so what's not to like, eh?

And people on the convention floor and out on the streets of San Diego? They really, really go for it. We're talking face paint, robotic parts, hand-sewn costumes — the works. No idea is too grand as long as you don't mind milling about in 90-degree weather while wearing it.

See what I mean? Forget Texas, everything is bigger in San Diego [at Comic-Con time].

I ran into these three sassy Star Wars characters on my way back from learning Dothraki one morning from the language's creator (step one: always give into your nerdiest of tendencies). The kids' cosplay is perhaps the best because they really commit to their characters. Princess Leia will most assuredly be starring in something that premieres at Comic-Con one day, you heard it here first.

As a huge Doctor Who fan I also couldn't pass up a photo of these dapper gents tackling the First Doctor and Brigadier Sir Alistair Gordon Lethbridge-Stewart:

Now, one thing must be said: if you're not a fan of huge crowds of people... Comic-Con is most assuredly not for you. With my anxiety amped up a few notches thanks to the insane — seriously, just mind-boggling — number of people around I went into New Yorker Mode, utilizing the skills I learned working in Times Square for 3 years to zip through the crowds and ease my mind. If you can't do that or don't mind it taking you 30 minutes to walk 50 feet then definitely/maybe reconsider a trip to the Con. Because the sheer number of people never — never, never, never — lets up.

As for the panels and events themselves? I have to admit — many of them were, surprisingly, underwhelming. I felt guilty feeling this way at first, expecting to be blown away by so many, but honestly it was a struggle to get into most of the panels I was truly excited about. With space at a premium and attendee numbers hovering somewhere around 200,000, lines abounded. Even using my press connections to try and get into certain panels came up short (sniff). But even then, the typically huge announcements and surprises you're used to reading about coming out of SDCC every year were in much smaller supply.

Being that it was my first convention, I had nothing to compare it to though I asked the many who have been multiple times how this year stacked up to years prior. The overwhelming consensus? SDCC fatigue is real and settling in for a lot of folks. Several other attendees who had been going to cons for years and years seemed to agree: 2014, for all its pomp and circumstance, didn't have the same zing-y attack as it has in years prior. Which isn't to say it wasn't fun — these sort of things are what you make of them, after all — but the hype machine did not necessarily match up with the supposed hype the studios were bringing.

But also it felt, oddly, as though the real originators of the convention were being further and further pushed aside for big name flashy things. We're, of course, talking about the comic book artists and other geek creators for whom the convention was originally made. Artist's Alley was relegated to one small section of the massive space to make room for giant Once Upon a Time installations and giant stands from television networks and movie studios. Fans were more interested in mass-created "Comic-Con exclusives" rather than unique and original art created by people who really made the convention what it was back in the day. This, as someone who loves both artistic efforts and television, left me a bit conflicted.

On a professional level, going to Comic-Con was a mad boot camp for on-your-toes reporting and the like. Stories to write, celebrities and creators to interview, on-camera madness at the drop of a hat, panel-attending and write-ups — you name it, it happened. Rolling with it instantly became my only form of survival, and the lack of sleep made the whole thing feel like a gauntlet-filled obstacle course (in a good way)!

Hall H was also a particularly mind-boggling experience. People camping out overnight just for the chance of snagging a seat in the so-huge-it's-dumb space where the weekend's biggest panels took place. (We got the chance to attend the Game of Thrones panel, for example, which was overall a pretty great experience.) The room itself was its own little microcosm within the convention center itself, self-sustaining with its own set of rules, concession stands, and bathrooms so that attendees could hunker down and not leave. All day. And trust us — they did NOT.

And, of course, the parties were very fun even if at times it all felt a bit at-odds with the event itself. So much free alcohol, copious amounts of snacks, and more than a few random celebrity encounters, both weird and delightful. Our personal highlight? Meeting Orphan Black's Tatiana Maslany at one of the first big fetes of the week. (Yeah, a lot of humblebragging comes out of SDCC.) But everyone was having encounters everywhere: Adam West — the OG Batman — was all over the place, as were other nerd icons like Chris Hardwick, Zachary Levi, the Mythbusters guys, Maisie Williams, George R.R. Martin, and even the elusive Benedict Cumberbatch.

The whole thing does seem to have a sense of humor, though — as evidenced by the many, many responses to the myriad protesters and Bible-thumpers on hand to yell at and chastise the convention for even existing.

Still, there's a sense of enthusiastic, creative, and obsessively loving heart at the center of the convention that's particularly present in its attendees, even if the corporate-and-branding overhaul has overshadowed that lot. The fans were happy to be there, happy just to be amongst their fellow nerds, obsessing and loving the same things together with abandon and pure, unadulterated glee.

More like this
Prince Harry Reveals How Meghan Markle Is “So Similar” To His Mum Diana
By El Hunt
You Definitely Know The Voice Of Shuri's AI In 'Black Panther: Wakanda Forever'
By Brad Witter
This James Bond Event At Abbey Road Studios Was A 007 Fan's Dream
By Samantha Rollins
The 'Love Actually' Reunion Is Missing A Major Player
By Bustle UK
Get Even More From Bustle — Sign Up For The Newsletter