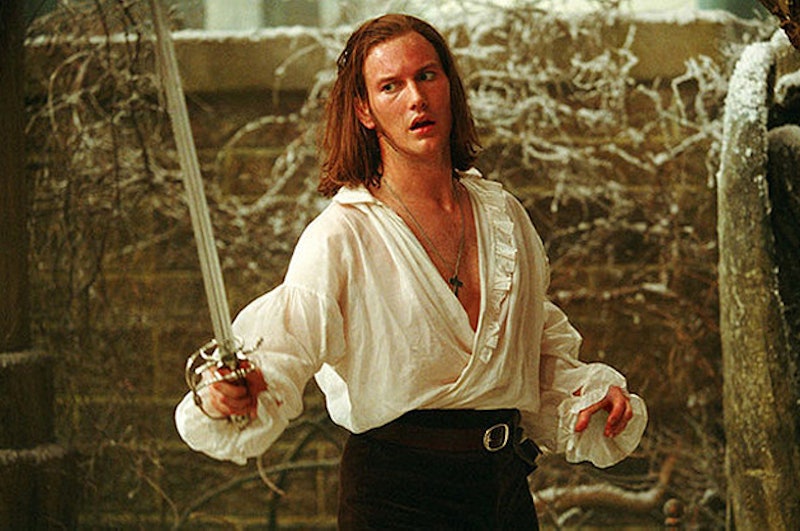 If you're looking for a good relationship, stay far away from most novels — try your local singles mixer instead. Boys in books are fascinating, sure, but what makes them so interesting is that they're seriously flawed. They have mountains to overcome, personal demons to conquer, mad wives to unlock from the attic.

But wait — isn't that just like real life? The singles at that local mixer may look clean-shaven and financially stable, but take them home and eventually you'll find all about their toxic ex-wives, broken engagements, and alcoholic benders. Even the one guy you met at church is keeping a terrible secret. That cute writer who's expounding on the virtues of typewriters vs. writing by hand? He'll turn out to be incredibly annoying. Oh, and stay far away from anyone whose last name starts with a "Mac-" and ends with a "-beth."

Fatalism aside, there are a handful genuinely good boyfriends in literature (all of whom are unfortunately taken). If you're an impressionable young romantic, these dudes are more than happy to be that unachievable ideal against which you'll measure up hundreds of real-life suitors, finding them all sadly lacking.

Aside from insulting his future wife on the first day of their acquaintance, Gilbert can do no wrong. He loves Anne Shirley even when she loathes him, he proposes twice (gotta love a man who knows what he wants), and he's a "clever young fellow, with his own thoughts about things and a determination to get the best out of life and put the best into it."

Mr. Darcy gets most of the swoons as far as Austenian heroes go, but he's far from perfect. Mr. Bingley, however, is really the type of guy you want to take home to your overbearing mama. He's "lively and unreserved, danced every dance, was angry that the ball closed so early." But most importantly, when he falls in love, he doesn't play games. Period.

3. Calvin O'Keefe, A Wrinkle in Time

Meg Murry is unpopular, unfashionable, and insecure — but she's also smart, adventuresome, and a member of one of literature's most interesting families. Calvin O'Keefe, an outsider in his own right, manages to see through her awkward exterior to the unique, brilliant girl beneath, and he not only travels to other planets with her, but ends up marrying her, too.

4. Augustus Waters, The Fault in Our Stars

Boyfriends in grown-up books may be more openly imperfect, but if you're looking for sweeping, heartwrenching, tearjerker romance, you've got to head to the Young Adult section. Augustus is superficially pretentious, but he's got a genuine heart underneath all that bravado, and manages to make the limited time he has with his girlfriend movie-level romantic.

Remember what I said about YA boyfriends? They may be young, but they'll stick by you through thick and through thin and through terrible bloodbaths set up by the rich to keep revolution at bay. It takes Peeta three whole novels to beat out his rival, but he gets the girl in the end — and goes through quite a bit of psychological torture to get there.

Controversial choice, I know. But despite his fatal flaw — UTTER DELUSION — the man is the quintessential romantic. He's heartbreakingly faithful to his lady and adores her from afar, even if his ideal of her doesn't match up to real life.

How can you not love a dude who sings, "Had you been there today/You might know how it feels/To be struck to the bone/In a moment of breathless delight!" Wait, sorry, that's the musical version. But even in Hugo's massive novel, Marius is a genuine good egg, whose underlying innocence allows him to fall in love suddenly and fully, Romeo-esque. Here's how it feels to be an in-love Marius: "Never had the sky been more studded with stars and more charming, the trees more trembling, the odor of the grass more penetrating; never had the birds fallen asleep among the leaves with a sweeter noise; never had all the harmonies of universal serenity responded more thoroughly to the inward music of love; never had Marius been more captivated, more happy, more ecstatic."

8. Raoul, The Phantom of the Opera

He's the childhood friend of protagonist Christine, and he's quite the traditional hero, as he strives to save her from the monster keeping her (emotionally, spiritually, physically) captive. Raoul also endures a good deal of torture at Christine's expense — always the mark of a good bae.

Speaking of saving your girlfriend from monsters, Jonathan Harker has his work cut out for him: his lady is at serious risk of turning into a vampire, unless Harker and co. manage to get a stake through Dracula's heart. It's easy to say you love someone, but it doesn't count unless you write about it in your diary, as Harker does: "This I know: that if ever there was a woman who was all perfection, that one is my poor wronged darling. I love her a thousand times more for her sweet pity of last night, a pity that made my own hate of the monster seem despicable."

David is the ultimate obsessive teenage boyfriend, and like any troubled teen, his love story isn't all roses and chocolate — he burns down his girlfriend's house, and that's just the beginning of the novel. Still, every weird, terrible, misguided thing he does is done out of this all-consuming love. If his passion verges on the insane now and then, can anyone who's been in love themselves really blame him?

11. Aragorn, Lord of the Rings trilogy

He may be laconic and constantly charging off into battle, but Aragorn has got to be one of the coolest boyfriends of all time. Not only does he get engaged to an elf, who gives up her elf-hood for him, but he's faithful to her — no matter how many blonde-hair maidens express interest in him — and he's characterized as a messianic figure. Ruling a kingdom with him would hardly feel like work at all.