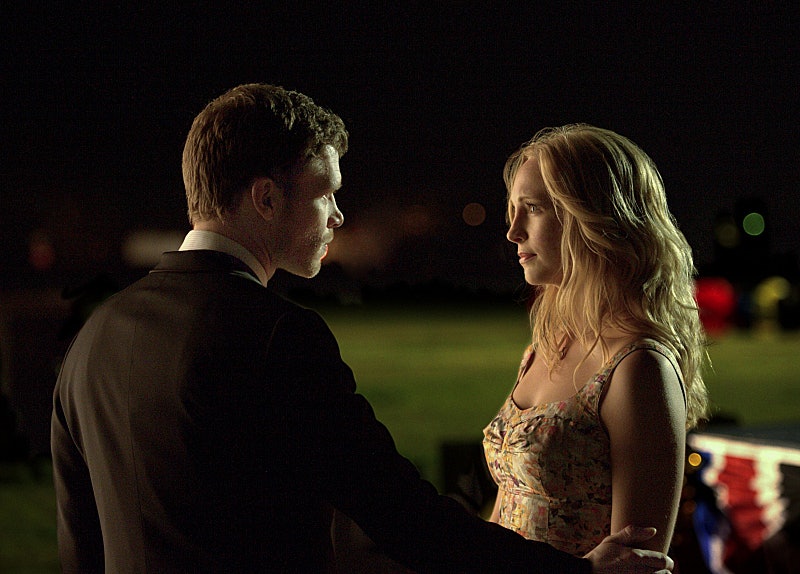 Let me make one thing very clear: I am now and will for always be a diehard Klaroline ‘shipper. It was a Vampire Diaries love match no one really saw coming, but when Klaus healed Caroline from a werewolf bite on her birthday way back in Season 3, there was a deep-rooted connection between these two characters that just couldn’t be denied. We knew it… the writers knew it… which explains why they continuously threw this unlikely pairing into each other’s path. And we, as fans, were more than happen to sit back and watch the sparks (and sarcastic comebacks) fly. Thus, Klaroline was born.

But then something terrible happened. Klaus had to go and get his own spin-off series on The Originals, forcing him and that sexy accent of his to be shipped off to New Orleans — taking any hope of a romantic future with Caroline along with him. (I mean, good for Joseph Morgan, but still.) All seemed lost. That is, until his brief return to Mystic Falls for one of the hottest forest sex scenes of all time. Suddenly, hope was renewed! Perhaps Klaroline really could happen after all. And now that it’s been announced that there’s going to be a Vampire Diaries and Originals crossover next fall, fans are more optimistic than ever that these star-crossed vamps can finally get the love story they so rightfully deserve.

Ugh, still not over it. And it's a big part of what made my above headline just as hard to write, as I’m sure it was to read. As much as we all want to believe there's a Klaus-Caroline reunion in our future, I’m regretfully here to insist that it’s just never going to happen… at least not anytime soon. Yes, Klaroline is officially doomed — and here’s why.

TVD ’s Season 5 finale made it abundantly clear that a Stefan and Caroline hookup is inevitably on the horizon. And like it or not, there are a ton of Steroline fans out there who are just as anxious to see Caroline with Stefan as we are to get her back on Klaus’ radar. (Basically, Candice Accola just has great chemistry with everyone, okay?) So this is not exactly something the writers can (or even want to) ignore. Paul Wesley himself even hinted at The Vampire Diaries 2014 Comic-Con panel that Stefan “deserves some action” in regards to Steroline and is totally ready for that friendship line to be crossed. And now that Damon's stuck on the Other Side, he's going to need Caroline's support now more than ever.

But hey, maybe that’s a good thing. I would be completely content to let Caroline get all her romantic trysts out of the way now if it means Klaus will be her eventual endgame. After all… she may have a few different loves right now, but remember — Klaus intends to be her last… however long it takes.

Klaus and Hayley May Actually Become a Thing

I know, I know, I’m not happy about this either, especially since Hayley is pretty much the absolute WORST. However, it seems The Originals Season 2 is going to offer up a chance at a rekindled romance between these two grieving parents, which will cause quite a bit of strain in Haylijah paradise. Originals EP Michael Narducci hints that “[Hayley] and Klaus are the only two hybrids in existence now, so Elijah will inevitably wonder, ‘Is there a connection between my brother and Hayley that I could never surpass?'” Doesn’t exactly set the stage for a Klaroline rendezvous, does it? In fact, it kind of does the exact opposite.

It's okay… let it out. We feel your pain.

Long distance relationships suck. It’s a simple fact of life, even in the supernatural world. Klaus still has a ton of unfinished business in New Orleans and even though Mystic Falls is currently serving as an anti-vampire repeller, it’s highly doubtful it will stay that way for very long. Klaus and Caroline are both in completely different places right now — quite literally. It’s bound to play a big factor in the writers' decision to pursue — or not pursue — this relationship any further. That is, unless fans want Caroline to completely forgo her TVD ties and head over to New Orleans full time? I gotta say, I don’t necessarily hate the idea.

We’ve Put Them on Too High a Pedestal

Delayed gratification can be great, but sometimes when you want something so much, you tend to set the bar to an unfairly high standard that could become impossible for anything to live up to. Perhaps we’ve put too much stock in what might have been between these two love-vamps, when really it may not be as wonderful as we might think.

Oh, who am I kidding? They’d be perfect together. #TeamKlarolineForever

More like this
ITV's 'Maternal' Was Inspired By A Very Simple – & Unanswerable – Question
By Maxine Harrison
Netflix Shut Down 'Bridgerton' S3 Rumours About A “Very Dark” Storyline
By Bustle
'Wednesday' Star Emma Myers Thinks A Wenclair Storyline Is “Possible” In Season 2
By Alyssa Lapid
Shonda Rhimes Responded To The Surprise Exit Of A Day 1 'Grey's Anatomy' Figure
By Grace Wehniainen
Get Even More From Bustle — Sign Up For The Newsletter
From hair trends to relationship advice, our daily newsletter has everything you need to sound like a person who’s on TikTok, even if you aren’t.