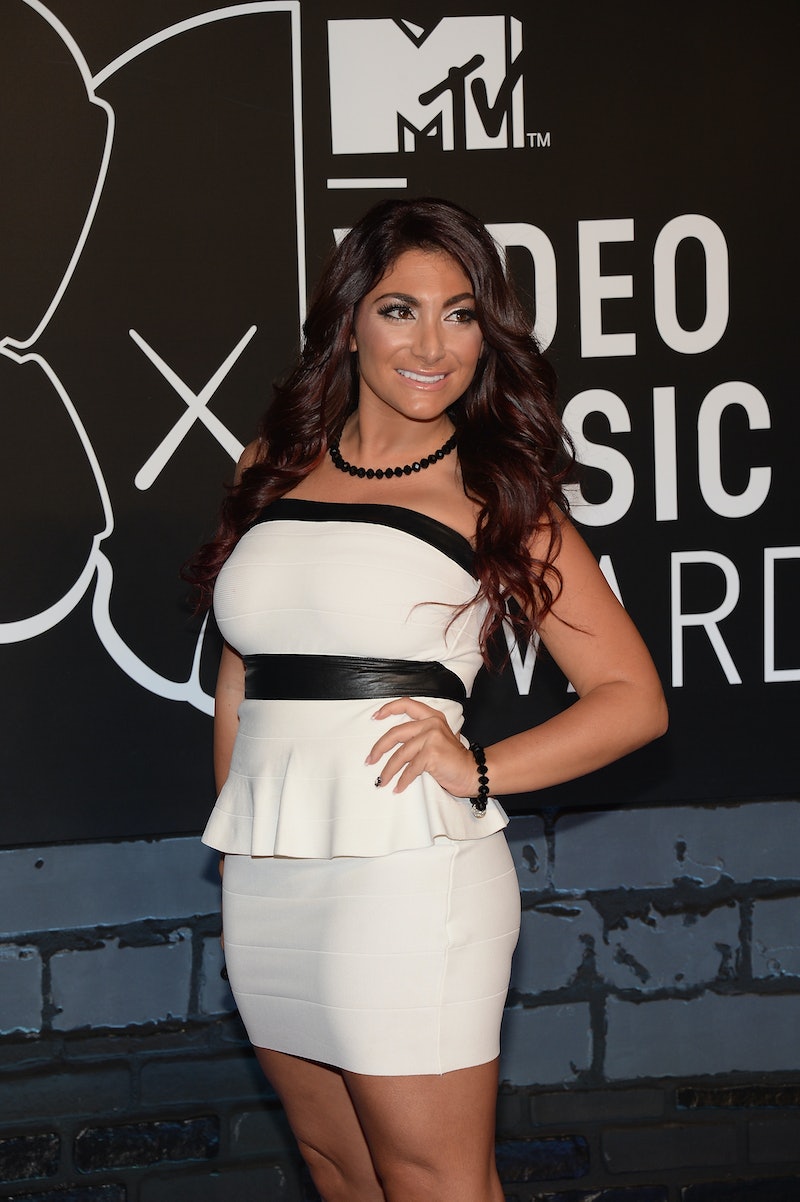 In our lifetimes, certain cultural benchmarks come along to signify the beginning of a new era, and the closing of another. The moon landing, the falling of the Berlin wall, and the settling down of the entire cast of Jersey Shore all qualify as such significant events. Just like most of former housemates, Deena Cortese from Jersey Shore has settled down with a long-term boyfriend. So who is Deena's boyfriend, anyway? As you may remember, on Season 6 of the MTV Show Deena has began dating Chris Buckner, and they've now been together for three years. Apparently, if you fall in love on Jersey Shore, things seem to work out just fine.

Ron and Sam have be living together peacefully for years, Snooki is engaged and pregnant, JWoww is a mother, and Mike "the Situation" is in a committed relationship (even if he's still getting arrested). Did I miss something? At one point in time, it seemed that those orange harlequins would be partying into eternity, cast in amber with their fists and hind quarters' forever frozen in the air. But times have changed, people have grown up, and smush room mattresses have been retired in perpetuity. From the looks of it, even "Blast in a glass" Deena is living a toned-down life with her boyfriend. Look at all the fun they have!

Bruckner and Cortese have reportedly been dating since 2011. Unlike the rest of the gang and their requisite significant others, we didn't get to know Buckner all that well. This begs the question... Who is Chris Buckner really? Does he pick up the tab when he takes Deena to Rivoli's? Is he supportive of her bold fashion choices? Does he love her unconditionally, even when she accidentally flashes her "cooca" in the club? Let's find out more about him...

He calls the Dirty Jerz home

Damn skippy! Because Jersey folk are part of an unbreakable tribe. Cortese is from New Egypt in South Jersey (incidentally just one town over from my own home town) and Buckner isn't from too far away. He went to Freehold Township High School, where he played football and graduated in 2007. This would make him roughly 24 or 25, and Deena is 27. According to Wet Paint, the couple was introduced by mutual friends. Check him out as an adorable child, then as a high schooler. Do I detect a fake tux senior picture?

He gets food. No, he like, really gets it.

On social media, Buckner comes out as a vehement supporter of food. This is important to the survival of any relationship.

I don't know what kind of food is in the following picture, but I certainly wouldn't kick it outta bed.

Confidence is not an issue for him. Just check his tweets.

Albeit hilarious and obviously jokes, some of the things he says on Twitter indicate delusions of grandeur.

He & Deena will be on Couple's Therapy

OK, so I get that this is a slight red flag. MTV confirmed that the couple will be on the upcoming season of VH1 Couple's Therapy, which airs in September, to work out their "relationship demons." They speculate that the Bruckner and Cortese may be a bit too far at either ends of the personality spectrum — Buckner being the more rigid, no-nonsense rock, and Deena being the freewheeling party girl. If you remember, we saw the seeds of some relationship strife during Season 6 when Deena was arrested for drunkenly dancing in the street.

What's rather confusing is the fact that all over Instagram, Cortese and Buckner seem to be perfectly stable and happy. Buckner even posted Deena's mugshot on his Instagram as a gag. So apparently, they're laughing about it now...

They may not need the therapy, but as you know, every former reality star needs a paycheck.