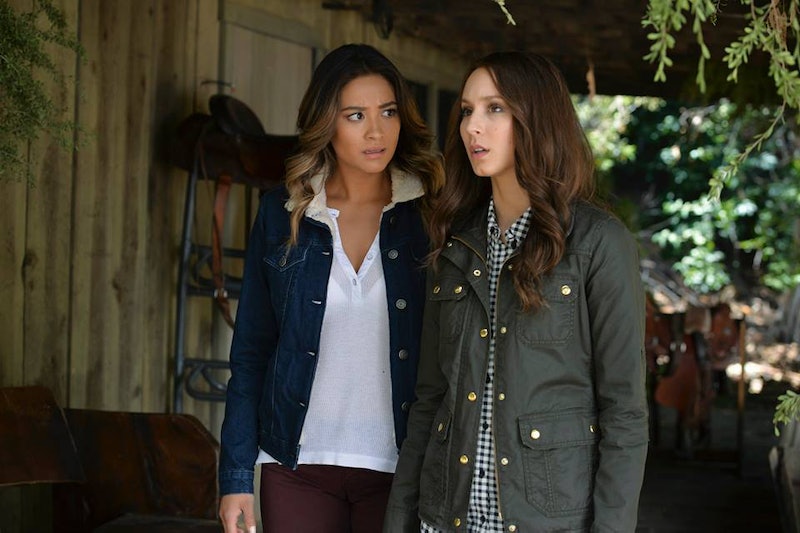 Are we really going back here? It's been a long season already for PLL fans — and we're only eight episodes into Season 5. Starting with Pretty Little Liars Season 5 premiere, the show made Melissa Hastings a suspect. And since then, she's flitted in and out of Rosewood simultaneously incriminating herself and, like last Tuesday, convincing me that she didn't kill anyone. On Tuesday, Pretty Little Liars ' "Scream for Me" brought Melissa Hastings back into the picture, but this time it had to do with Bethany Young.

We're all still asking, "Who is Bethany Young?" and how she was connected to Mrs. DiLaurentis, and why she drew those seriously disturbing demon drawings in art class. And even though Aria got a little bit of info out of Big Rhonda on Tuesday, we still don't really have any idea what Bethany's relationship with Mrs. D was all about. Except for the fact that she took Bethany horseback riding and adopted a horse named Custard for her. Which is pretty big info, but sheds very little light on what the hell was going on in that screwed up situation.

After Aria almost killed Rhonda, who's a diabetic, by the way, by giving her root beer and cheese doodles, she figured out exactly which stable the unlikely pair visited and shared that Bethany breakthrough with Spencer and Emily. And, naturally, Spencer dragged Emily over there to grill the stable boy, Declan. The pair of liars learned that Bethany liked to ride in her slippers (okay) and that there was a "bucket incident," during which Bethany became upset and threw a bucket at Mrs. D's face. That seemed to be the end of what Declan knew, but in typical Spencer fashion, she just had to keep looking.

And so, PLL led us back to Melissa Hastings. While Spencer and Emily continued to poke around the barn, Spencer found Melissa's monogrammed riding helmet (of course it was monogrammed) and the shit is really hitting the fan. Did "A" plant the helmet there so we'll continue believing that Melissa is "A" or has some HUGE part in all of this DiLaurentis-Bethany Young drama? Or is it actually Melissa's helmet that she's keeping at the stable? Spencer doesn't seem to know for sure and now, neither do we.

I've been searching for clues ever since Season 5 premiered and put Melissa with Mona and the "A" Team. And PLL almost convinced me that Melissa was innocent last week, but now — as usual — I really just don't know. You can't trust a Hastings, after all.

More like this
This 'White Lotus' Symbol Could Hint At A Major Character's Death
By Grace Wehniainen
Keke Palmer Just Announced She's “Going To Be A Mom” On SNL
By Brad Witter
The Kenan & Kel Reunion On SNL Took A Dramatic Turn, Thanks To Keke Palmer
By Brad Witter
The 'Firefly Lane' Book Ending Teases Way More Tears To Come In 2023
By K.W. Colyard
Get Even More From Bustle — Sign Up For The Newsletter