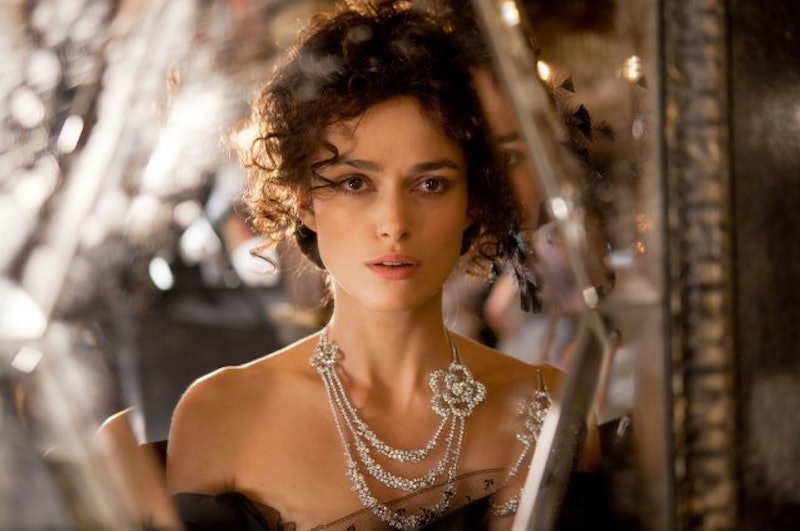 Does it get any better than period costumes?

Personally, I'm kind of obsessed with them: I'm the kind of nerd that begged her mother to sew her a historically accurate Regency Era empire-waist gown so she could go as Elizabeth Bennet for Halloween in 10th grade (it should be noted that only one person guessed my costume's identity correctly. Other guesses included Wendy from Peter Pan and one of teenaged sister wives from a polygamist colony in Texas. Dang, I knew I should have sprung for the bonnet!). I also have a whole pile of sewing patterns for Renaissance gowns and '50s summer dresses at the ready, should I ever have the time/will power to do some actual sewing, and half of my favorite TV shows and movies feature, you guessed it, lush costuming (for the record, my top 5 movies are Inglourious Basterds, When Harry Met Sally, Shakespeare in Love, Clueless and Howl's Moving Castle).

Anyway, that's all to say that I love costumes. So, to celebrate the awesomeness of period costuming, and bask in the glory of beautiful clothes that I will never own, I've made a list of ten of the very prettiest costumes, ever. And when I say "prettiest" expect a lot of crystals, sequins, and poofy skirts. A lot. (We'll save the badass period costumes for another day).

I'm kind of obsessed with this film (and all the clothes, from Francesca Mondino's cat fascinator to Shosanna's femme fatale get-up), but there's no beating Bridget von Hammersmark's Stoltz Der Nation red carpet dress when it comes to glam factor.

I don't care what anyone else has to say about it, the forehead rhinestones (not to mention the glitter) were fabulous.

And don't even get me started on the wings.

Full disclosure: I haven't actually seen The Great Gatsby, given its 49 percent rating on Rotten Tomatoes. I did, however, drool over the costumes, which were a joint effort between costume designer Catherine Martin and couturier Miuccia Prada.

And as long as we're on the subject of couture x costuming, we've got the lovely-ly luscious 19th century ballgowns, which costume designer Jacqueline Durran says were heavily influenced by couture of the 1950s.

Does it get any better than Viola de Lesseps here's ruff? I don't think so.

Okay, this may not technically count as period, as Rear Window was a contemporary film (50 years ago), but I had to include it. All of Ms. Kelly's outfits in the film are absolutely fabulous (especially her nightgown), but this one is iconic.

Same goes for Sabrina: perhaps not technically period, but there's no one more worthy of a little light rule-bending than legendary costume designer Edith Head. Plus, if we're talking Grace Kelly, we have to talk Audrey Hepburn, right?

Choosing a favorite dress from GoT was hard, you guys. I'm always going to be partial to Sansa's black feathery Iron-Throne-worthy gown (and Dany's infamous post-Daario cut-out dress wasn't bad either), but since this is the list of "prettiest" period costumes, I think Margaery's wedding dress has to take the cake (or rather, the pie).

This was another very difficult decision. Personally, I'm something of a Peggy, fashion-wise, and between season 5/6 Megan, Joan season 3, and Betty season 1 — I'm not going to lie; it was tough. But this hot pink, poofy-skirted halter is one of my all-time favorites from the show.

What can I say, Keira Knightley x Jacqueline Durran is a match made in heaven: This green silk dress might just be one of the prettiest dresses ever. I know, because I saw it in real life at Universal Studios, and my friends literally had to drag me away from it (so sue me, I would rather stare at pretty gowns than ride on Jurassic Park for a third time).