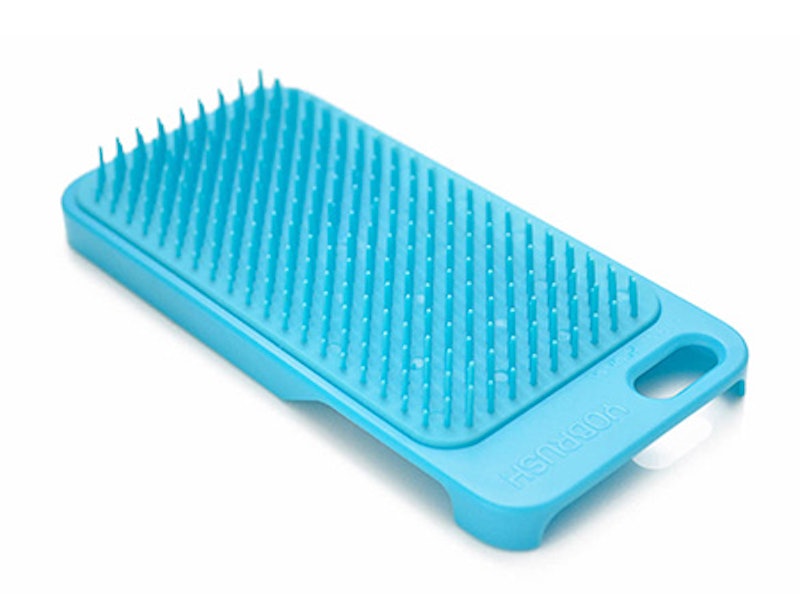 There are many things I own that I definitely do not need: a pair of giant gold headphones, a fedora (file under: horrible phases Olivia went through), and probably at least 45 percent of all the shoes I own. Yet, there they sit in my closet as a constant reminder of my horrible life decisions. And there's always a new product coming out that, for whatever reason, I always think is necessary. I mean, who wouldn't want this adorable little robot man? Or this bracelet that shocks you when you skip going to the gym? 2014, man. It's a crazy cool time.

But sometimes, however, an item hits the market that makes me think the opposite. As in, "who would ever even think that they need that?" And with that, I give you the YoBrush. Part iPhone case, part hairbrush, almost definitely completely useless.

It's pretty much just what it sounds/looks like. A iPhone case that has bristles on the back to brush your hair with. I guess, in theory, the YoBrush could be helpful. For those whose hair needs frequent brushing, or if you have a surprise date pop up after work and you need to look like a human. But mostly, it just makes me think of all the iPhone cases that could be constructed that would actually be helpful to my life. So, without further ado...

I will defend this option only by saying that one of my favorite shows is Law & Order: SVU and I have been conditioned to fear most everything in the real world including: shadowy places in libraries, anywhere that serves alcohol, poorly-lit sidewalks and most cities as a whole.

2. Case Made Of Chocolate

This one doesn't really make sense at all. But I would prefer to having to try to eat my chocolate phone case before it melted rather than having the option to brush my hair at a moments notice. Just saying.

3. Case With Succulent Growing Out Of It

The most hipster phone case that ever was. Succulents don't need water that often, and also you could say you're really, really going green. I mean, no, you may not recycle regularly, but your phone case is a plant, for God's sake. You are cool.

4. Case That Unclogs Drain For You When Hair Clogs It Up

This is more of a solution to a personal problem I'm having right now and refuse to deal with more than anything else. It also is completely impractical and makes pretty much zero sense, but it would still make more sense to me than the YoBrush. That is all.

5. Case That Displays Important Messages To Friends When You Are Texting In A Social Setting

"No, I am not ignoring you right now. Technology has not ruined my ability to be social and/or polite. I simply am posting a picture of myself on Instagram. I still love you guys. Stop exchanging judge-y glances. I see you." Oh come on, you've been there too.