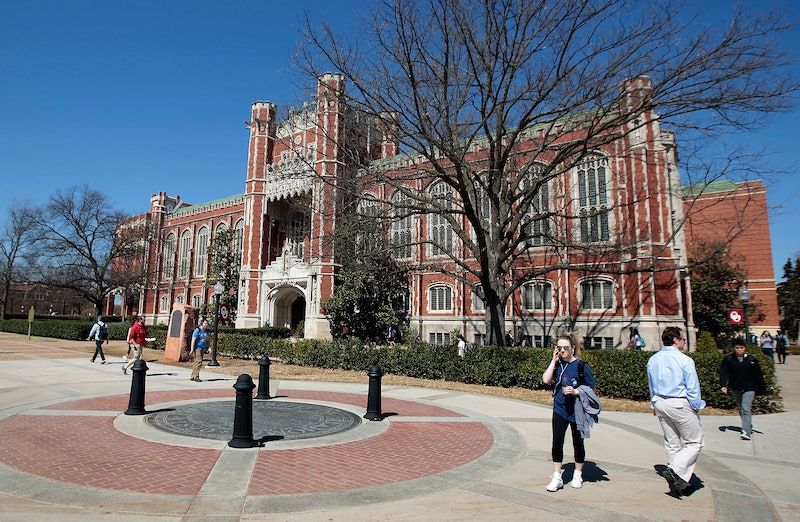 Thanks to Kathleen Hanna, it was easy for me to slip right into punk feminism. At 16, I met a girl with pink hair that had also traveled over an hour to attend a show in a warehouse that reeked of hairspray ... because it was warehouse that made hairspray. I figured we had a lot in common since we both apparently enjoyed smelling chemicals, taking photos of mosh pits, and being in the direst section of Boston in January, sans heat, just to watch a few bands play. As it turns out, she hooked me up with a few organizations that would be crucial to my development as a feminist.

Back then, when I thought of feminism, I assumed you had to be a prude, dress unattractively, and yell at men for holding the door open for you. Obviously, that sounds very unappealing. In fact, I've actually been known to curtsy when men rush to open the door for me or pull out my chair. The feminists that I happened to have the pleasure of knowing in high school were very much about chivalry; getting girls to the front of the crowd to help us avoid being trampled in a violent mosh pit or accidentally punched in the face was top priority. This rivaled the importance of reproductive health and the power of being promiscuous, if and when we felt like it. Today, the punk feminist exists.

When I arrived at college, I had to really talk myself out of judging the other feminists who were complete opposites of the women I had come to know. There were no leather skirts, long black hair was replaced with short, bull-cuts and there were no male feminists in these groups. Say whaaaa?

Needless to say, outside of our weekly club meetings, I wasn't exactly rolling deep to parties with feminist pals. My first frat party, someone actually puked in my purse after I escaped being sandwiched in between two girls making out to Jay-Z's "Is that Your Bitch?". Well, really, I can't be sure of the song because it was almost drowned out by the sound of frat guys cheering them on. Oddly enough, one of the fist-pumping brothers would hook me up with a job that I desperately needed one summer. In hindsight, I cherish the experience to be myself in a crowd of aliens. If I had stayed away from stepping out of my feminist cocoon of safety, I wouldn't have changed so many narrow minds. Here's my guide to dressing like a feminist at your next Frat Party.

Bonus Tip: Feminism means you can wear whatever you want and no one has the right to harass you about it — that goes for men and womyn.

Rule No. 1: Dress for the Occasion

This is not a classy affair. Everyone knows that you were just coming from your dorm, so wearing your Sunday best or last year's Halloween costume when you dressed up as a Go-Go Dancer is a rookie mistake. Save those outfits for formal parties or appropriate themed parties. A frat party is also not the best place to wear your shortest dress. My motto is avoid short dresses whenever a mass group of drunk men will be in a very tight space. You'll be more comfortable and you won't be that girl constantly pulling down your skirt.

Rule No. 2: Ditch Those Heels

One thing is certain, any pair of heels will get ruined at a frat party. Not only will your heels stick to the floor that's glazed with what's hopefully just spilled beer and jungle juice, but you're also likely to have at least 20 people step on your new suede boots throughout the evening — and that's not fun at all. Getting mad won't help either — the sheer crowd of people and drunken madness will make it hard not to step on one another. Wear a comfy pair of sneakers and that way you can start dancing or running from campus police if necessary.

Rule No. 3: Make Your Mind A Fashion Statement

This isn't to contradict Rule No. 2. There is no need to wear a slogan T-shirt that represents everything you stand for at a party, unless you are truly comfortable. Frat parties can be a place where you can meet people outside of your own clique, and these new pals are likely to hold different viewpoints on the world from their previous environment or parental influence. Some of those opinions can help solidify your own and some need a desperate 180: The best way to change close-mindedness is to be friendly and tolerant. Don't isolate people by having an agenda that's written in bold, angry letters on your shirt because Greek Life can be an excellent ally for Womyn's groups on campus. Check your 'tude and fem-gear at the door or save it for when one of the bros gets out of line.

Set yourself aside from the sheep; wear something creative that you're also comfortable in. Pajama party theme? Try a satin pajama set with pants or shorts and a tank top, wear a matching bathrobe for cover-up if you are uncomfortable or cold. Pimp and hoe party theme? Go as the pimp and make one of the brother's your hoe for the night — reversing gender roles one day at a time.

If you previously liked to dress in any alternative fashion or push the "normal" limits of modern fashion rules, feel free to do so at a frat party too. If you are wearing your slightly witchy attire confidently, then you will wear it well! Don't be concerned with misdirected evil looks from your classmates — they've been drinking hatorade all night and that doesn't concern you. After all, being a feminist is really just about doing whatever the hell you want.