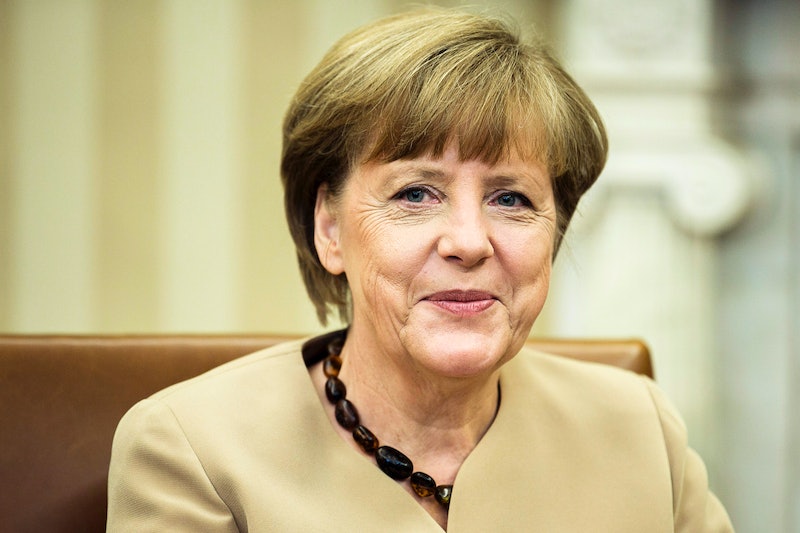 When you're busy running a country, you barely have time to shop for your outfits, let alone do some closet cleaning and updating. This would prove to be German chancellor Angela Merkel's exact thoughts towards her wardrobe. According to Slate, German newspaper BILD discovered that their proud leader Angela Merkel has been wearing the same colorful tunic for the last 18 years.

The headline read, "Our Chancellor Stays True to Herself," followed by a series of photos of the Chancellor in her favorite silk tunic — one from 1996, another from 2002 and the most recent from this year. While Merkel may receive a lot of flack for not having having any style ( Forbes calls her fashion sense "frumpy"), I have to say that this particular silk tunic is very on trend with this season's patterned kimono obsession. Merkel's tunic is a little more vibrant and '80s-inspired than most kimonos/tunics I've been seeing, but I think that's what makes it so stylish — it's uniqueness. I mean, also LOL at people even judging her fashion sense, but that's an intense feminism argument for another day.

And, as modeled by Merkel, this piece is a perfect for any occasion, night or day. In the photos, you can see Merkel dresses it up over a lacy black dress and down paired with some black trousers. Unlike most other celebrities or politicians, Merkel chooses to buy her own clothes. As a result, “she often wears the same outfit multiple times," states BILD. She may be too preoccupied to go shopping, but at least she understands the importance of a staple piece and how to work them into all sorts of outfits.

Merkel isn't the only famous person who isn't afraid to step out in the same ensemble. Although her pieces may be far older than most, I think we can expect to see the following outfit repeaters wearing their favorite clothing pieces decades from now.

Of all the celebrity outfit repeaters, FLOTUS totally gets Merkel the most. It's widely known that Michelle Obama is hugely in favor of wearing ensembles over and over again. And why not? Those dresses aren't cheap! From Jason Wu and Prabal Gurung to Alaia and Thakoon, the First Lady's got expensive fashion taste. But even though she's got designer style, Michelle Obama's not afraid to show up wearing the same dresses over and over again.

For someone who's always in the public eye and is regarded as one of the world's biggest fashion icons, Duchess Kate Middleton shows no remorse for her love of recycling outfits. And it isn't just the basic pieces, like her favorite Zara blazers and skinny jeans. Middleton has been spotted wearing the same gowns to multiple red carpet outfits. Still, she manages to make what's old look completely new again, sporting different accessories, jewelry each time.

Victoria Beckham is one of the most stylish people on the planet. But even the world's most fashionable people are fans of being eco-chic — that is re-wearing old outfits. In Beckham's case, most of the pieces she has been caught recycling are those from her own collection. If I designed my own incredible line, I'd definitely be wearing it over and over again, too.

Miranda Kerr doesn't repeat outfits as much as the rest of the people on this list, but she's a staunch purse recycler. Kerr has been known to tote around the same designer purse around town, whether she's leaving the gym, walking around with her son Fynn or at a red carpet event. I'm positive she'll show up 15 years from now with her trusty Chanel purse by her side (that will technically be "vintage" by then).

When it comes to fashion, Jennifer Aniston is the queen of basic (no, I don't mean that in the "basic bitch" kind of way). She's no frills, knows what she loves, wears what she feels good in. It should come as no surprise then that the former Friends star is a huge fan of outfit repeating. But most of the time it's an all black ensemble, which technically doesn't even count as a repeat.

Not only does she arguably have the most killer fashion sense, Olivia Palermo is so fashionable, she could be a professional stylist if she wanted to (I'd hire her if I could afford her). Palermo has a wonderful way of working her closet staples into different outfits, totally proving that you can wear your favorite pieces in countless ways.

More like this
Taylor Swift’s Glitzy Grammys Look Is Giving Midnights
By Alyssa Lapid
Twitter Memed Doja Cat's Red Schiaparelli Look & I Am Cackling
By Dominique Norman and Kelsey Stiegman
Kylie Jenner Joins The Bondage Trend In At Paris Fashion Week
By El Hunt
Every Single Thing In Maya Jama’s 'Love Island' Wardrobe
By Darshita Goyal and Sophie McEvoy
Get Even More From Bustle — Sign Up For The Newsletter
From hair trends to relationship advice, our daily newsletter has everything you need to sound like a person who’s on TikTok, even if you aren’t.