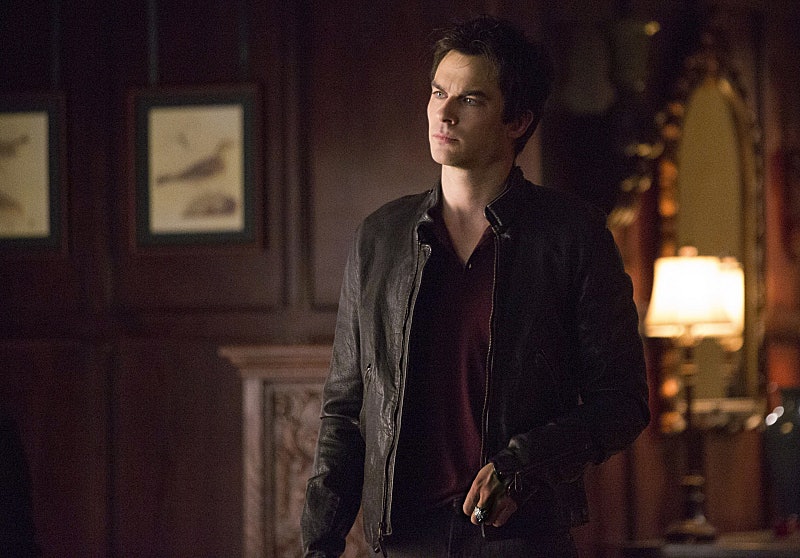 When news first broke that a Vampire Diaries and Originals crossover is happening next fall, fans immediately flocked to the Internet with theories as to what could potentially cause the vamps of Mystic Falls to collide with the Big Easy. Many hope that this could lead to a rekindled Klaroline romance — though others fear that relationship may be doomed forever. But vampire love lives aside (just for a second, at least), this merger could signify a lot more than just a possible love story. It could also be a necessary plot point to bring Damon back from the dead. Well, he was already technically dead as a vampire, but you know what I mean. This could be the way to save Damon (and Bonnie, of course… but really, who are we really more worried about here, honestly?) from the Other Side.

Let’s think about this logically. If you were a vampire and wanted to find a solution that would save your loved ones from an impossible situation, who are you going to call? (Hint: the answer is, for once, not Ghostbusters.) No, you’d want to get in touch with the most powerful supernatural creatures on the planet! Because surely, between all their combined years of built up vampire knowledge, they must know of some loophole that could save Damon and Bonnie from the great beyond (or wherever the hell they are right now).

I mean, that makes sense, right? And something tells me it’s going to take a mighty powerful witch — maybe even the Original Witch — to help reverse the damage that’s been done. Don’t get me wrong, the witch twins Luke and Liv are great and everything, but a problem of this magnitude calls for some wickedly talented professionals. So it’s a good thing Mama Esther is currently back in the land of the living, unbeknownst to Klaus and Elijah, mind you.

The Mikaelsons are the strongest supernatural family in the world. Vampires, hybrids, witches — this family tree has it all. So why wouldn’t the TVD gang go to them in their time of need? Frankly, it was pretty poor judgment on their part for not involving the Original clan sooner. (I guarantee they could’ve dealt with this whole Travelers problem in no time at all.) But I guess vampire hindsight is 20/20? Regardless, Elena & Co. are going to need some serious back up for this rescue mission. However, I’m sure this little alliance won’t come without a price. After all, the Mikaelsons are way too smart to ever do something for free without asking for anything in return. As the saying goes…

Perhaps, in exchange for their help, Esther or Klaus will want Elena’s blood for some new supernatural spell we have yet to learn about (which I’m sure would be completely consequence-free). Or maybe they’ll use the opportunity as a way to bring someone else back from the Other Side as well, not just Damon and Bonnie. (I’m looking at you, Kol!) Either way, I’m sure whatever agreement both parties decide upon will end up having horrific side effects. But hey, at least we’d get Damon back...

And if Klaus needs any convincing in regards to helping out… I’m sure a certain blonde would be more than capable of persuading him to do the right thing. And we’d be more than happy to watch.