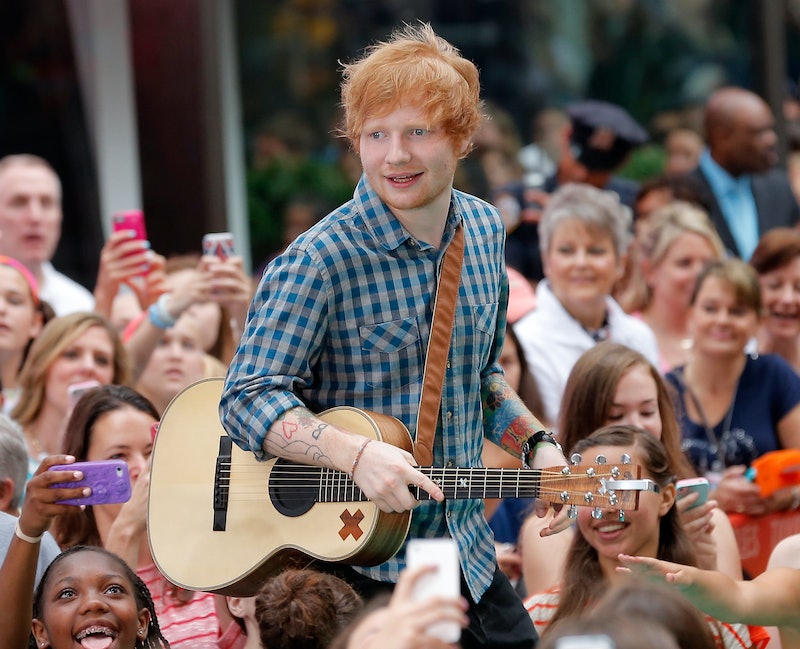 Surely by now you've heard Ed Sheeran's "Don't" and seen the sweet video (if you haven't — do see it, and ahem, don't wait any longer to watch it). There's a lot of speculation about whether or not the song is about Sheeran's best friend Taylor Swift, but he's quick to decline that. Remember: He's vehemently said that "Don't" is not about Swift. In fact, he's been saying it for months now.

So why is everybody asking if the song is about her? There's got to be a good reason. Perhaps it's because of these "Don't" lyrics:

And never wants to sleep, I guess that I don't want to eitherBut me and her we make money the same wayFour cities, two planes the same dayThose shows have never been what it's about

Caught in a bad tour-mance, am I right!?

But there's the counter-argument that HollywoodLife.com reported back in April — the song is about his ex Ellie Goulding, not Swiftie. That's a viable option because we know the tune is about a fellow singer — just like Shakira's hips, these lyrics don't lie — but then there's Yahoo! Celebrity UK's report that says Swift was "livid" about Sheeran's new lady Athina Andrelos. Obviously, if Swift was jealous of Sheeran's love interest, that must mean that Swift and Sheeran were romantically involved at some point, which means "Don't" could, in fact, be about Swift.

Maybe the speculation over who "Don't" is or isn't about is indicative of the fact that we all want there to be a Taylor Swift-Ed Sheeran romance/hate-mance/emotional sing-off. Maybe we're projecting our fantasies and searching for clues that the song is about Swift, even if all evidence points more directly toward Goulding.

Perhaps we'll see what happens when Swift's new album drops. If there's a song called "Ed" on the album, then, well, we can start making some more assumptions. For now, consider "Don't" the "You're So Vain" for millennials. I bet you think this song is about (Taylor Swift), don't you?