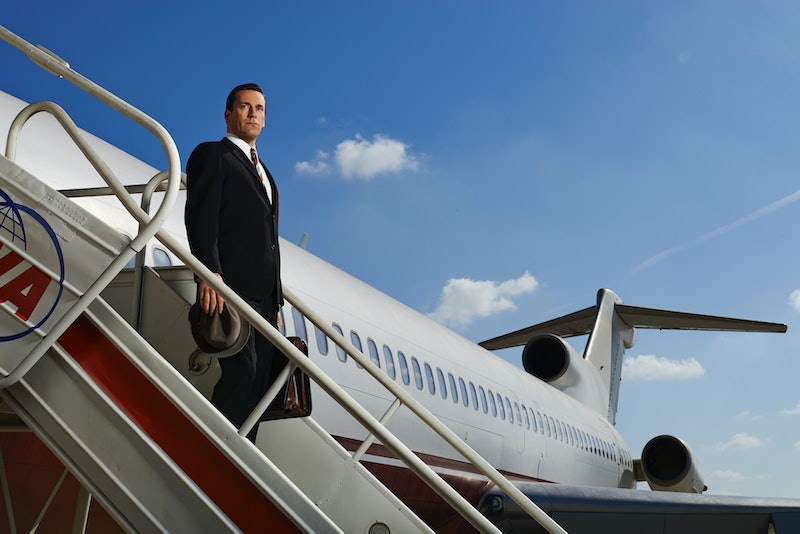 It’s a question that’s plagued our minds ever since we first saw the falling (and oddly familiar looking) businessman plummet towards Madison Avenue in the opening credits: Does Mad Men actually intend to kill Don Draper? Given the rather depressing turn that Don’s life has taken over the years — losing everything from his family to his job, along with any sort of dignity he still had left — it wouldn’t be too surprising to see this once-esteemed ad man take one more final (and fatal) fall. But did Season 7A change any of that?

Unlike the show’s intro, Don’s ultimate fate isn’t quite so black and white. Many fans think viewers are reading way too much into Mad Men’s falling man theory, believing that it’s simply a symbolic gesture of Don’s life spiraling out of control rather than a foreshadowing of his inevitable demise. And that’s true. It could totally just be showrunner Matthew Weiner’s cruel (and genius) way of messing with our minds throughout all the years. And I might be tempted to just leave it at that if I had nothing else to go on. HOWEVER, there are some “death” clues out there that can’t so easily be thrown out the window. (Too soon?)

All the Airplane Metaphors

You are free to roam about the symbolism. Mad Men Season 7’s airplane promo videos generated a lot of discussion amongst fans with many theorizing that it represents Don’s collision course to the afterlife — departing not just from the terminal, but perhaps even from the world itself. And did anyone notice the movie Don was watching during the premiere? It was Frank Carpra’s 1937 film Lost Horizon, which tells the story of plane crash survivors. This could very well signify Don’s fate. Maybe he’s not jumping out of a building, but rather falling out of an airplane.

The Fact That Dick Whitman Is Already Technically Dead

This has been true ever since Don made the decision to give up his life as Dick Whitman and become Don Draper. As far as the rest of the world is concerned, Dick Whitman is already dead. It could be time for that little piece of fiction to become fact by laying the real Dick Whitman (aka Don) to rest once and for all.

While on vacation in Season 6, Don opts to read Dante’s Inferno, which describes a man’s journey through the nine circles of Hell. Not exactly your typical summer read. Don clearly has death on the brain, proving that he —much like us — fear that the end is near. This is just too big of a connection for it to mean nothing.

Everyone around Don seems to end up dying: his brother, the real Don Draper’s wife Anna, his doorman from Season 6, Bert Cooper in the mid-season finale — the list goes on and on. Lane Pryce even committed suicide in his very own office… the same office that Don now inhabits. Coincidence? Absolutely not. Of course, this could also be a simple case of misdirection. Weiner may be allowing us to connect these dots so easily just so he can disprove it all later on. I certainly wouldn’t put it past him. I haven’t been force fed so many foreshadowing examples since my seventh grade English test. But it’s still an impossible teaser to just flat out ignore.

Then again, it’s easy to read into anything if you try hard enough. There are many who are also convinced that Megan will die by season's end. But we could just be grasping at straws, trying to figure out what this wonderful Mad Men journey has all been leading up to. But if you look at the facts, the odds really do seem to be working against our fellow protagonist. This final season is supposed to be all about consequences, and what bigger consequence is out there other than death itself?

More like this
'Bridgerton’s Jonathan Bailey & Simone Ashley Just Teased A First Look Of “Kanthony” In Season 3
By Grace Wehniainen, Alyssa Lapid and Sam Ramsden
7 Of The Highest Highs (& Lowest Lows) From Love Island 2022
By Victoria Sanusi
The 'PLL: Original Sin' Creators Say A’s Identity Will Be “Very Clear” By The Season Finale
By Alyssa Lapid
No, Adam Collard *Still* Isn’t Collarding
By Victoria Sanusi
Get Even More From Bustle — Sign Up For The Newsletter