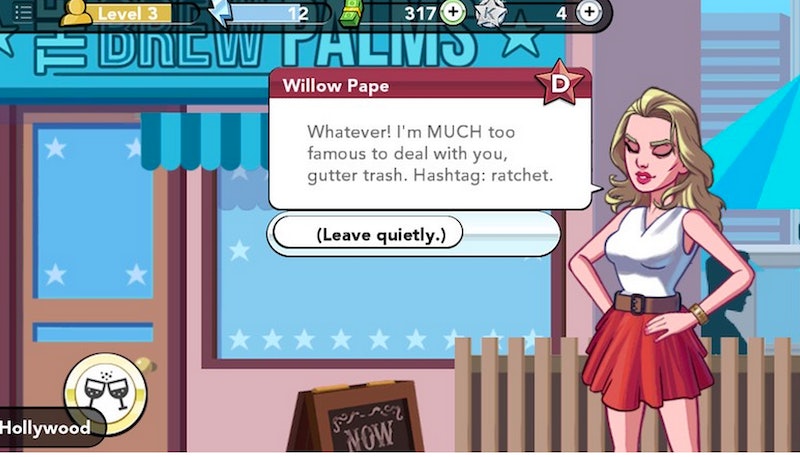 The thrill is not yet gone: Kim Kardashian: Hollywood kontinues to be a major part of my life. Kan’t stop, won’t stop. Thursday night, the game was like, “Oh, you can go to London now,” and I was like, “THAT'S AWESOME BUT WHAT ABOUT IBIZA? DO I EVER GET TO GO TO IBIZA? WILL I RECONCILE WITH WILLOW PAPE IN IBIZA?" The game did not respond.

Ah, Willow Pape. The Pape. She e-dragged my avatar’s fashion choices through the e-mud. She attacked my avatar for talking to her ex. She attempts to snatch away my avatar's gigs on the reg. She’s picked fight after fight with my avatar in public. The Pape is a most unpleasant foe. You could say she's a Pape in my ass. (I'll see myself out.)

Whenever The Pape is involved, I’m never sure what the "correct" move is (if I'm given an option beyond the "Leaves quietly." button, that is). Should my avatar take the high road? Should she ignore The Pape? Should she retaliate? Should she create a scene?

How does one handle The Pape? What is the correct answer? What's the rule of thumb?

Alas, there isn't one definitive, "always/never" answer. Like a real-life relationship, my avatar's relationship with The Pape is complex and nuanced. It does not always benefit my avatar to give The Pape the kold shoulder. If my avatar always opts to kill The Pape with kindness, that can backfire. And sometimes, it works in my avatar's favor to stoop to The Pape's level.

I've attempted to study the inner-workings of my avatar's nemesis, and as a result, I've generated the following "how to handle a Pape-y sitch" list. It isn't a comprehensive list, but it's a start.

When asked if you want to toss a glass of booze-a-hol at The Pape's face, follow your heart. Chuck that beverage and reap the rewards.

I've noticed that when I choose to be rude to The Pape, my fan base receives a boost. If you exchange verbal jabs with The Pape, it keeps the feud alive. People love a feud.

Be Nice When Elizabeth Korkov Is Around

If you, The Pape, and Elizabeth Korkov are at the same event, it's probably a good idea to be as mature as possible, i.e., don't poke The Pape. If you don't let The Pape get under your skin, Elizabeth Korkov will take note. This will strengthen your business relationship.

If Ray Powers or that one paparazzo asks you about The Pape, don't be nasty. Per a relevant Chapter Cheats message board thread, it's important you answer correctly. Otherwise, your fan count will take a nosedive.

Don't choose rant about her.. because thats how I lose fans.

Don't talk krap behind her back. Only talk krap to her face. Kan do.

And here I thought "no comment" was always the best route!

Press I don't! You gain fans! If you press any other options, it makes you look like the bad guy, so you'll lose fans. People love you if you act all sweet! Ray tweets bad about willow and you get fans! It's a win win!

Great. Now I'm so confused, too.

Maria asks you if you want to get The Pape back for spreading rumors about you. If you say yes, your fan count will increase.

She will try to send out a tweet about you and how you're a homewrecker (basically). Then the game will tell you to go on a date and to meet up with the person that you supposedly "twerked" on and be all buddy buddy with them. I suggest get revenge, when Maria gives you the option. You will gain fans and it will be rumored that Willow got a DUI.

The Pape gets inebriated at a club event. You are presented with the option to call her a cab. I did just that. And then, when asked about the incident, I didn't say anything nasty about The Pape. All of my choices worked wonders for my avatar's image.

But what happens if you don't call The Pape a cab? To the Chapter Cheats message boards I go!

Call cab. When I did the interview with that guy asking about willow Pope I chose the "rant about her" option and lost 1m fans..so yeah. I think if you insult her you'll lose fans.

I insulted her & When you do it will make a scene & Maria and Tom lord will talk to you at dinner about your image and how you should act around your investors, & will ask you to do a 8 hour shoot for the voldka to make up for it

While living it up at an event in London, the game asks if you'd like to slap The Pape. YIKES. According to Twitter and the Chapter Cheats boards, you should not do it. You'll lose one million fans and get kicked out of the party. Violence is not the answer!