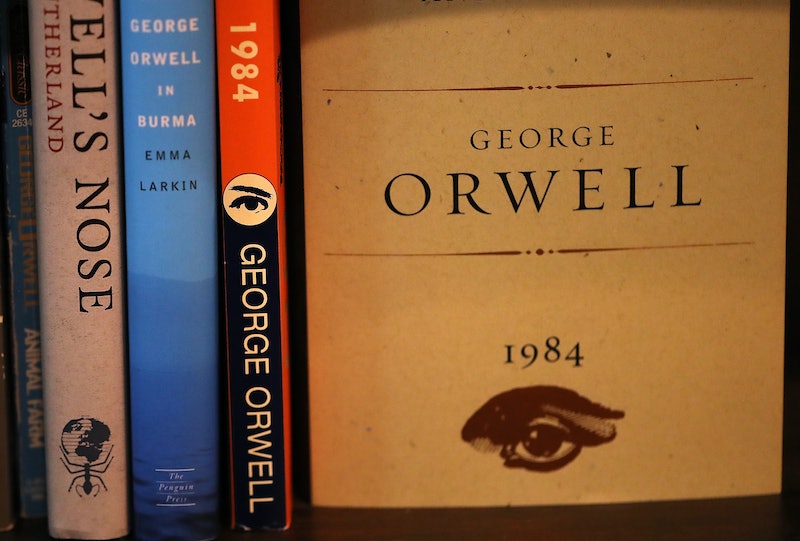 Ah, the 7th grade: a time for grappling with puberty, having awkward crushes, and reading books you don’t fully understand. One of those books is Animal Farm, a novel that makes its way onto many a middle school syllabus. It has all the makings of a great seventh grade read: It’s short, steers clear of controversial topics like sex and drugs, and has an engaging allegory.

Like rereading The Giver or Julie of the Wolves , delving into Animal Farm as an adult is a totally different experience. First of all, there’s a lot more context. As you may not have known in middle school, George Orwell was actually named Eric Blair and wrote many great things aside from Animal Farm and 1984, including stellar nonfiction. Much of that nonfiction work touched on his personal experiences, including his time fighting in the Spanish Civil War and his years working as a dishwasher in London. Knowing some details of his political and literary subjects gives Animal Farm a whole new feel.

For those who aren’t familiar with Orwell or his work, reading Animal Farm as a grown-up still presents some OMG-did-not-notice-that-when-I-was-12 moments. Napoleon, the pig, uses his power to sleep with all the ladies? Booze is the cause of half the book’s problems? (Say it ain’t so!) From big themes to little details, here are the things you didn’t notice about Animal Farm because you read it as a pre-teen:

1. The book wasn’t intended to critique all forms of socialism, just Soviet Communism

You probably learned the definition of “allegory” when you read this book in Language Arts class, and you may have even discussed how it represents socialism or communism, but you probably didn’t get more in-depth than that. Unfortunately, by not learning the specifics of the allegory, you sort of miss Orwell’s whole point. He was a big fan of the British socialism movement, and never intended for Animal Farm to be interpreted as a caution against all attempts at collectivist political reform. He really just hated Soviet Communism… a lot.

2. The subtitle is “A Fairy Story,” and the book is exactly that

A lot of publishers don’t even print the subtitle, and many teachers ignore it when teaching the novel, but it’s actually pretty significant. By “Fairy Story” Orwell means that the tale is intentionally simplified and flat. The characters are stereotypical on purpose, and the plot is meant to be easily understood. As C.M. Woodhouse writes in his introduction to the book, the story has no moral at the end, but also no morality throughout. It’s less like a traditional novel than like one of Grimm’s fairytales: engaging to read, but pretty horrible if you think about it closely (take "Little Red Riding Hood" as an example).

“Only get rid of Man” proclaims Old Major, and the animals could be “rich and free.” For those of us with more than a decade or two under our belts, the sentiment is far too familiar. “Only get rid of the Jews,” “the blacks,” “the immigrants.” The list of scapegoats is a long one. Throughout the book, the pigs in charge keep the animals angry at humans through lies and persuasion. If the animals in the book learned that humans weren’t so different or evil, there would be no reason to fight. If humans in the real world could learn that lesson about other humans, there would be a lot less warfare.

4. EDUCATION CAN BE USED AS A WEAPON

From Chapter 3 onward there is a divide between “the more intelligent animals” like the pigs, and the “stupidity and apathy” of the other animals like horses and sheep. The divide that Orwell depicts creates a system where knowledge is power, and those without it are kept ignorant so that they can focus on labor. Later in the book, Boxer discusses his impending retirement, and how “it would be the first time that he had had leisure to study and improve his mind.” As Boxer was forced to work instead of study, we was kept subordinate until his labor was no longer useful, and no longer a threat to the pigs' power.

5. RELIGION IS ALL RIGHT, SO LONG AS IT DOESN'T HAVE MUCH POWER

In one of the symbols that even a 12-year-old can understand, Moses, a tame raven, comes to represent religion (see what Orwell did there?). His only role in the story is talking to the animals about Sugarcandy Mountain, a magical place that he claims animals go to when they die. The ruling pigs assert that the heavenly place doesn’t exist — yet they let Moses remain on the farm without working and they provide him with food and beer. The pigs, as did the soviet leaders, understood that religion is important to their citizens — but that it should be constrained for the sake of their own unchallenged power. Soviet Communism used Russian Orthodox Christianity to mollify people during rapid — often terrifying — challenges to the status quo, but ensured that religious leaders were killed or exiled if they strayed from the party line.

6. Orwell’s essay “Politics and The English Language” (which you probably didn’t read in 7th grade) echoes throughout the book

Orwell's seminal essay on the usage of language sets out a blueprint for budding writers, plus a series of gripes about modern English, including how it is used for political purposes. Among other things, the essay laments the way that politicians use euphemism and vagueness to describe harsh or unpleasant things (bombing a village becomes “pacification,” and evicting people from their homes is a “transfer of population”). Examples of this are found in almost everything that Squealer the pig says. In one instance, he explains away Napoleon’s inconsistencies as “tactics, comrades, tactics!” As Orwell writes, “The animals were not certain what the word meant, but Squealer spoke so persuasively … that they accepted his explanation without further questions.”

Much of the book is devoted to the animal’s goal of building a windmill, an allegory for both of Stalin's five-year plans to change the USSR's economic landscape. It inspires everything that they do and makes up for all that they lack. As Orwell writes, “They had had a hard year … but the windmill compensated for everything.” The construction takes years, and once it’s finally completed Napoleon has them begin work on another one. As did the Soviet bureaucrats, the farm centers on windmill construction fastidiously — making it their primary goal about all others. The windmill is a distant goal that keeps the animals inspired enough to work hard without complaint, a situation that Napoleon is conscious of and exploits.

8. Napoleon uses his power to sleep with a lot of women

Depending on what grade you took Sex Ed in, this small element of the book may have gone over your braces-laden head. One autumn after the revolution, Orwell describes how the four sows on the farm had littered at the same time, and states “the young pigs were piebald, and as Napoleon was the only boar on the farm, it was possible to guess at their parentage.” In case you’re still not getting it — he slept with all the sows, because that’s what male leaders tend to do (with females of their own species, obviously). Later on, Orwell refers to one of the pigs as Napoleon’s “favourite sow,” confirming that his sex habit has not diminished with age.

9. The story is pretty anti-booze

The whole animal revolution begins because the farmer gets drunk and forgets to feed the animals, and the book ends with a drunken brawl between pigs and humans. Once the pigs discover alcohol towards the middle of the story, things take a turn for the worst. The low point comes when Napoleon sends Boxer, the horse (and the closest thing to the novel’s protagonist), to be killed for his parts. The pigs then use the money to buy a case of whiskey and get wasted. As it turns out, the Soviet Union wasn't too cool with booze either, leading to various efforts to curb consumption throughout the 20s, 50s, and 80s.

10. The book was coincidentally published in conjunction with the dropping of the atomic bombs

In August of 1945, the United States dropped two atomic bombs on the Japanese cities of Hiroshima and Nagasaki. This was the same month that Animal Farm first made its way onto bookshelves, in a coincidence that Woodhouse writes, “must have given Orwell a sad, ironic satisfaction.” While your 7th grade teacher may not have brought up the strangely coincidental timing of the book’s publication, it’s definitely something to ruminate on during a grownup reread.

11. ORWELL HAD BEEF WITH CLASS WARFARE IN CAPITALIST ECONOMIES, TOO

If you only remember one thing from the book, it’s likely the phrase: “All animals are equal, but some animals are more equal than others.” This is the final “Commandment” that the pigs paint on the barn wall, after they’ve removed, and strayed, all from the others over the years. The statement sums up the conclusion of the book, which mirrors what Orwell saw happening in the Soviet Union. Similarly, it also mirrors what he saw happening in imperial England and throughout the world, where the capitalist division of labor and class created rampant inequality. This line (and the book as a whole) prompts the question: Why are some people — often those with wealth or a certain family name — considered more equal than others? It’s a dilemma that remains relevant, all these years later. Just ask Thomas Piketty about that one.