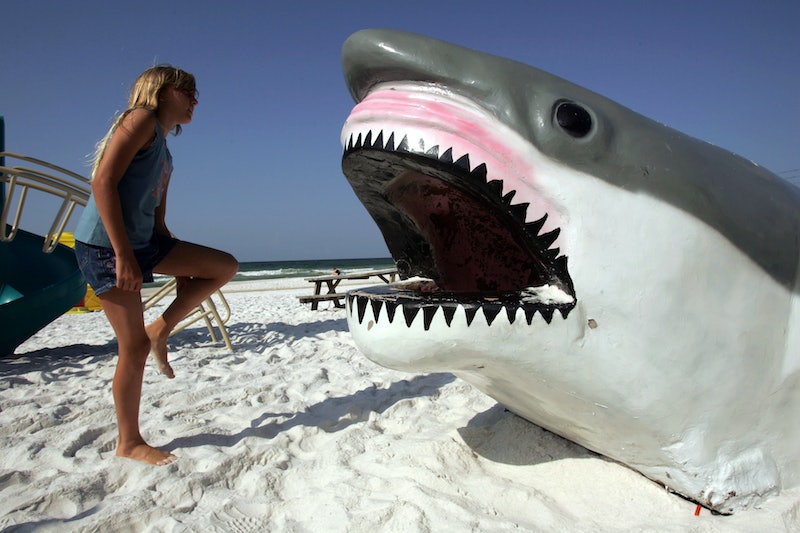 It's that time of the year when it's appropriate to play the Jaws theme on repeat... it's Shark Week! It's a week on the Discovery Channel dedicated to all things shark for an entire seven days, and it's glorious. Scared of sharks? Fascinated by them? You'll definitely learn something during the week. On Monday night, the network will air Jaws Strikes Back. Ah! Will Jaws Strikes Back have anything to do with the famous shark from Steven Spielberg's 1975 movie? Is there a real-life Jaws lurking in the ocean waters? Should you hide yo kids, hide yo wife? Is it OK to swim if you have your period?

According to the Discovery Channel's Shark Week listings, the show is about the following:

[...] Marine biologist Greg Skomal and the REMUS SharkCam team travel to the remote Pacific island of Guadalupe to film the hunting behavior of the largest great white sharks on earth.

So, no. This documentary doesn't actually have anything to do with Jaws, the famous, human-devouring shark. But hmm, a lot of other Shark Week shows, like Air Jaws: Fin of Fury, feature the name of that notorious shark from cinema. So what's going on here? Why do all of these Shark Week shows feature that famous name?

Entertainment Weekly reports that The Discovery Channel often picks the titles of the shows first, long before they develop the actual show. Michael Sorensen, Vice President of Development, said:

We have brainstorm meetings for titles on every show, and I’m telling you, when a brainstorm meeting on the next car show comes up, you go to a conference room and there’s like four people in it [...] Anytime we have a Shark Week brainstorm for titles, you have to get more seats. It’s packed, people throwing out mash-ups: One of my favorites that came out of one of these meetings was Sharkcano. I’m like, ‘I don’t even know what that is, but if we ever find sharks feeding around underwater volcanos, I’m sure there’s a show there.

"Jaws" is merely a popular shark character, and a good title means a lot of viewers, which means, of course, a more successful Shark Week. SHARK POWER.

So, nope; Jaws Strikes Back ain't fiction — it's a real, factual show about sharks. Like this one!

OK, it's very likely that the ice cream was superimposed into the picture, but still — it's a week for sharks to celebrate, so yeah — sharks deserve snacks.