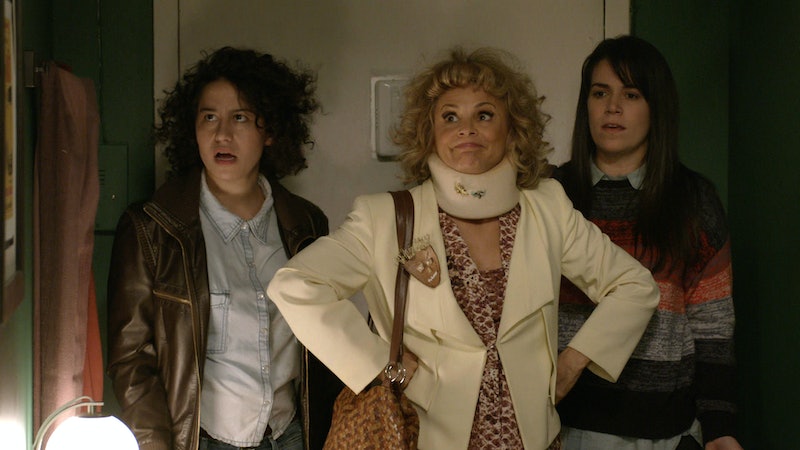 It causes me unimaginable sorrow and great pain to report that the premiere date for Season 2 of Broad City, starring Ilana Glazer and Abbi Jacobson, has yet to be announced. All we know, as of right now, is that Season 2 will be arriving at an undisclosed time in 2015, which means all anyone can really do right now is cry and count the minutes until next season arrives. But fear not: Glazer and Jacobson know we love them and miss them and need them back in our lives, which is why they've already begun diligently prepping for Season 2. Their first order of business? Finding next season's kick-ass guest stars by any means necessary, including bribing potentials with a Ryan Gosling make-out session.

Vulture reports that last week, while Diane Keaton was crowd-sourcing on Twitter for "action-packed kisses" to pin on one of her many Pinterest boards, Glazer and Jacobson took the opportunity to ask Keaton if she'd appear on Broad City, promising plenty of action-packed kisses to sweeten the deal. Keaton tweeted in reply: "If you can deliver Ryan Gosling, I'm in!" Keaton also added "I'm going to check out your show!" which leads me to believe she hadn't seen Broad City before, which leads me to believe she's not a real person.

That being said, Keaton as a Broad City guest star would be the best ever, and I really, really hope all the parties involved in this Twitter exchange are 100 percent serious. Just in case Glazer and Jacobson need further suggestions for other potential Season 2 guest stars, I've provided some suggestions:

What I'd be doing if Kristen Wiig showed up as a guest star on Broad City.

Like Glazer and Jacobson, Natasha Leggero is also an alumna of the Upright Citizen's Brigade, so having her on the show could be like a little mini reunion. Also, if you've never watched Leggero's YouTube series Tubbin' With Tash, please go do yourself a favor NOW.

She's the voice of Louise Belcher on Bob's Burgers (among other things) and she's kind of amazing.

Her characters are consistently hilarious and I personally find her to be a DELIGHT.

It's only natural that Broad City producer Amy Poehler's real-life BFF4EVR appear on the show.

More like this
Who Could Die In The Stranger Things Season 4 Finale?
By Kadin Burnett
Julie Andrews Revealed A Surprising Behind-The-Scenes 'Bridgerton' Detail
By Grace Wehniainen
Who Is 'Umbrella Academy' Star Elliot Page Dating After His Divorce?
By Jake Viswanath
Paapa Essiedu Likes To Keep His Relationship Pretty Private
By Maxine Harrison
Get Even More From Bustle — Sign Up For The Newsletter