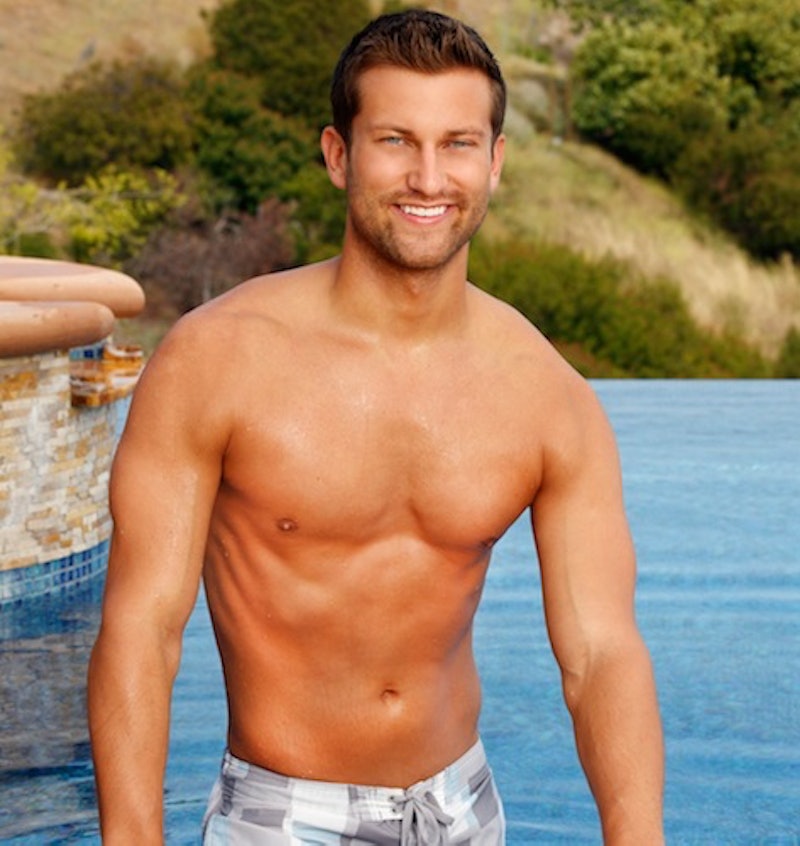 Every Bachelor show needs a villain, and Bachelor in Paradise seems to have their bad guy in Chris Bukowski. The Illinois resident has officially been on four Bachelor-themed shows: Emily Maynard's Bachelorette season, Bachelor Pad 3, a failed attempt to join Andi Dorfman's season, and now Bachelor in Paradise. And on all four of these shows, he had some pretty terrible moments.

It can be easy to only see one side of a person on a TV show. After all, editing tries to tell a story and it can twist scenarios to make you look better or worse. But once you've been on four shows and acted out of line on each one, I'm starting to believe it's more your personality. Only, according to the Bachelor Family, it's not. Chris Bukowski is hated on TV and beloved in real life. What gives?

Chris has only been here for one week, but already he's up to his old tricks, and next week's promo shows him descend even further down that path. Will we ever see the Chris everyone else seems to see when the cameras are off? I doubt it. Let's see how reality TV Chris compares to real life Chris and see if we can figure out why there's such a divide.

REALITY TV CHRIS HAS A TON OF ENEMIES

During Monday's episode, Clare Crawley said he lived up to his reputation when he asked her on a date and later made out with Elise. She's far from the only contestant to have problems with him on camera. Just ask Bachelor Pad's Blakeley Shea who found out Chris was lying to her about his relationship with fellow contestant Jamie Otis. "It's not about loyalty, it's not about trust. It's all about Chris," she complained to the camera. Chris has no shortage of haters in the various Bachelor houses.

REAL LIFE CHRIS HAS A TON OF FRIENDS

Chris is nothing if not popular with his fellow Bachelor Family members. There are a ton of photos on him on Instagram palling around with the likes of Jaclyn Swartz, Michelle Money, Rachel Truehart, Ed Swiderski, Tony Pieper, and more. He's pretty beloved in Bachelor Land.

REALITY TV CHRIS IS A DOG

On Bachelor Pad he hooked up with Blakeley, Jamie, and Sarah Newlon all behind each other's backs. These actual words came out of his mouth: "The best thing I have done is traded in Blakeley and Jamie for Sarah. It's like buying a new car. You get the nice new car smell and this is so much smoother and nicer for me." Too gross. Newsflash: Women aren't objects you can swap around for your demented mind games.

He loves posting pictures of his adorable pup, Miley. It's hard to have negative feelings about someone who is so invested in their pet.

He waited outside the Bachelorette mansion for a week waiting to get his shot with Andi. She declined to let him join the show, which was definitely in her best interest.

But at least this time it was a joke.

Sometimes people just aren't cut out for reality television. They can be great people in real life and just not themselves on camera. Perhaps this is why Chris has such a split personality on and off the show. So for his sake, let's hope his time on Bachelor shows ends after this summer, because Chris needs to just be himself, and not this awful reality TV version.