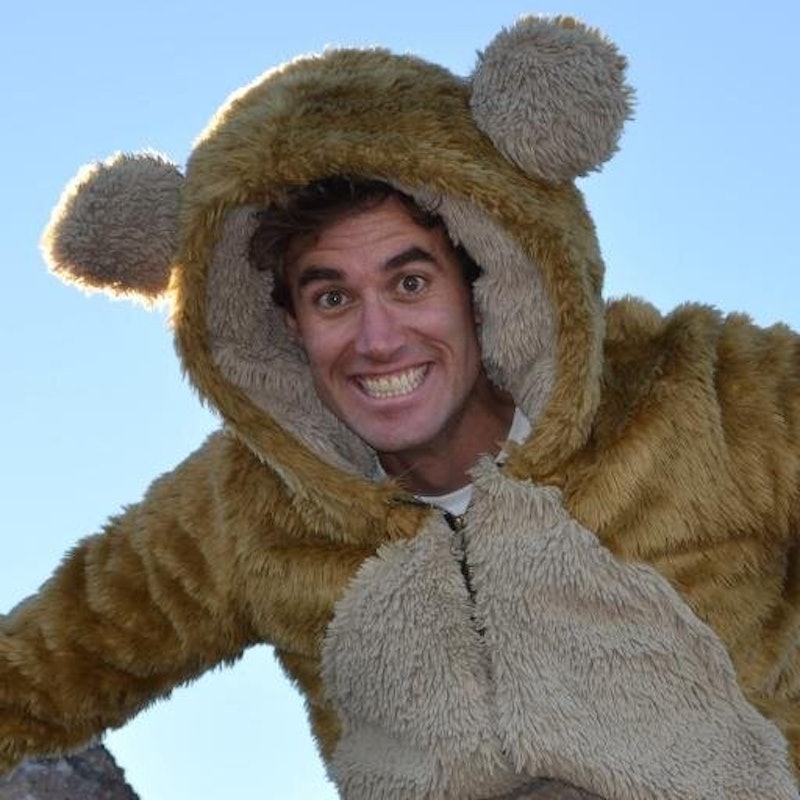 Any time you gather a roomful of someone's exes together and make them sit next to one another, it's going to create drama. Monday's Bachelorette Men Tell All will be no different. But unlike last season where much of the negativity was mostly directed toward Bachelor Juan Pablo, the promo for this Andi Dorfman's season makes it seem like the guys go after each other more than they go after Andi. The big Men Tell All drama is between JJ the pantsapreneur and the rest of the guys. It's hard not to like a guy who invents such a weird job title for himself, but even I can admit, JJ doesn't make for the best reality star because he ends up getting defensive a little too often.

The Men Tell All fight is specifically about the alleged racist remark Andrew Poole made. A few weeks into the season, Andrew already had a target on his back for allegedly getting a waitress's number and bragging about it — even though he was supposed to be there for Andi. So with Andrew already on the outs, JJ finally brought the racist comment issue to fellow contestant Marquel Martin's attention. He told him that during the first rose ceremony, Andrew allegedly whispered, "She gave [roses] to the two blackies.” Understandably, Marquel was upset about this alleged insult and brought it to Andrew's attention. Andrew ended up denying the whole thing.

That week, both Marquel and Andrew were sent home and the issue kind of died with it. But on Monday, it will be brought back up and it turns out some of the guys are mad at JJ for how he handled it. According to spoilers for the episode, the guys "accused JJ of stirring up trouble in front of the cameras and a few of the guys agreed that JJ handled it poorly. They didn’t side with Andrew but JJ got attacked pretty bad.”

Without footage of the Andrew's alleged remarks, it's hard to say if JJ did handle it properly. But what I do know is that it doesn't seem that the reality show life is a really good fit for JJ. He seems like a really happy-go lucky guy in real life (at least based on his social media presence), but on the show he's been put through the ringer, and that doesn't seem to jibe well with his fun-loving personality. The atmosphere of a house full of guys all dating one girl seemed to be too much for him, which totally makes sense, and he got upset about that during a group date one week.

It was a surprising outburst but apparently, it won't be the last come Monday's Men Tell All.

For some people, the reality show life just isn't for them. Arie Luyendyk Jr. famously turned down ABC's offer to be the Bachelor after he failed to win Emily Maynard's heart. And Sharleen Joynt from Juan Pablo's season was constantly uncomfortable with having the cameras around. Maybe JJ is just one of those people who's better suited for life off-camera. His day job is so cool; he's designing quirky pants and fuzzy bear vests. Why give that up for reality TV, a notoriously life-ruining endeavor? All this upcoming drama just shows that JJ should stick to his fashion passion rather than try to find love on TV. Even if he would have made a pretty interesting Bachelor .

And hey, JJ is the first to admit he's glad his TV days are behind him. The week after he got eliminated, he tweeted how excited he was to watch the show without having to watch himself.

He also said that live tweeting was so much more fun than actually "watching [himself] go on dates." And he's really glad he missed hometown date week.

So after Monday's Men Tell All episode we can all be glad that JJ's reality show days are behind him, and he'll go back to doing what he loves: making ridiculously cool clothing and staying out of the Bachelorette drama.