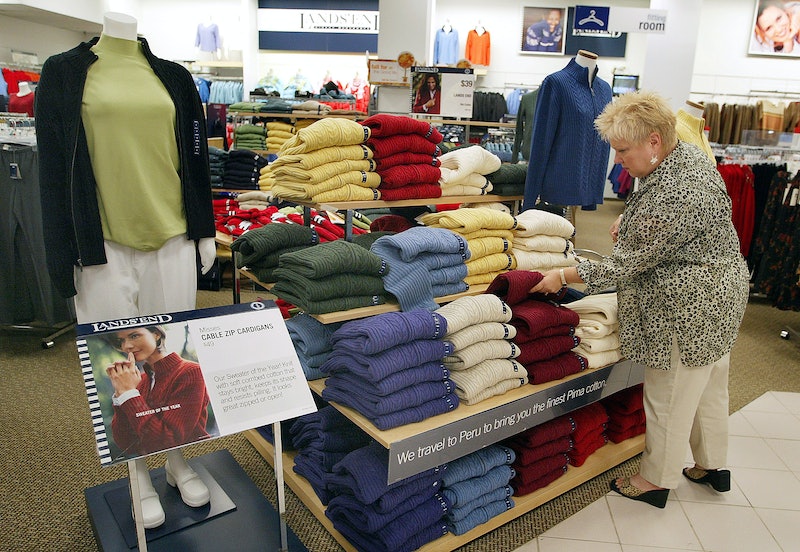 Loyal customers of Lands' End recently received a free issue of GQ magazine along with their regular catalog as a promotion, but the advertising efforts fell flat. The Lands' End catalog came with the July GQ issue with sultry Emily Ratajkowski (of "Blurred Lines" music video fame) and her two barely covered breasts, which apparently was too much for these customers to handle. The outraged Lands' End customers have been complaining to the company about their free copy of GQ for the last few days, according to Jezebel.

Many complaints were posted on the Lands' End Facebook page, mostly by parents who were extremely upset because their children could have seen it when innocently gathering the mail. Lands' End and Condé Nast have a deal that involves the customers receiving free issues of its magazines, but the previous magazines (Vogue, Glamour, and Self) received caused zero controversy. Probably because they don't put naked ladies on the covers.

Edgar Huber, Lands' End CEO and president, did email an apology for sending the magazine. For the sake of being ridiculous and making funny lists, I must admit that, although the front of the GQ July issue is revealing, there are far worse things Lands' End could have sent their subscribers way. So count your lucky stars, polo enthusiasts, that none of these showed up unwanted in your mailbox.

2. An Issue of Playboy

See? It could be worse!

These don't even offer any proper support!

In all seriousness, however, the GQ cover was certainly an ill-advised choice, and I totally get why some parents might not want their kids getting a glimpse of the risque glossy. Don't worry, Lands' End costumers — next month's freebie is an issue of Conde Nast Traveler.

More like this
Most Comfortable Underwear For Big Butts
By Audrey Williams
11 Graduation Guest Outfit Ideas To Wear To Someone Else’s Ceremony
By Phoebe Avison and Claire Fox
42 Black Owned Fashion & Beauty Brands To Support Today & Always
By Mekita Rivas, Shea Simmons, Kui Mwai and Dominique Norman
8 Cozy-Smelling Fall Candles For 2022
By Olivia Rose Ferreiro
Get Even More From Bustle — Sign Up For The Newsletter