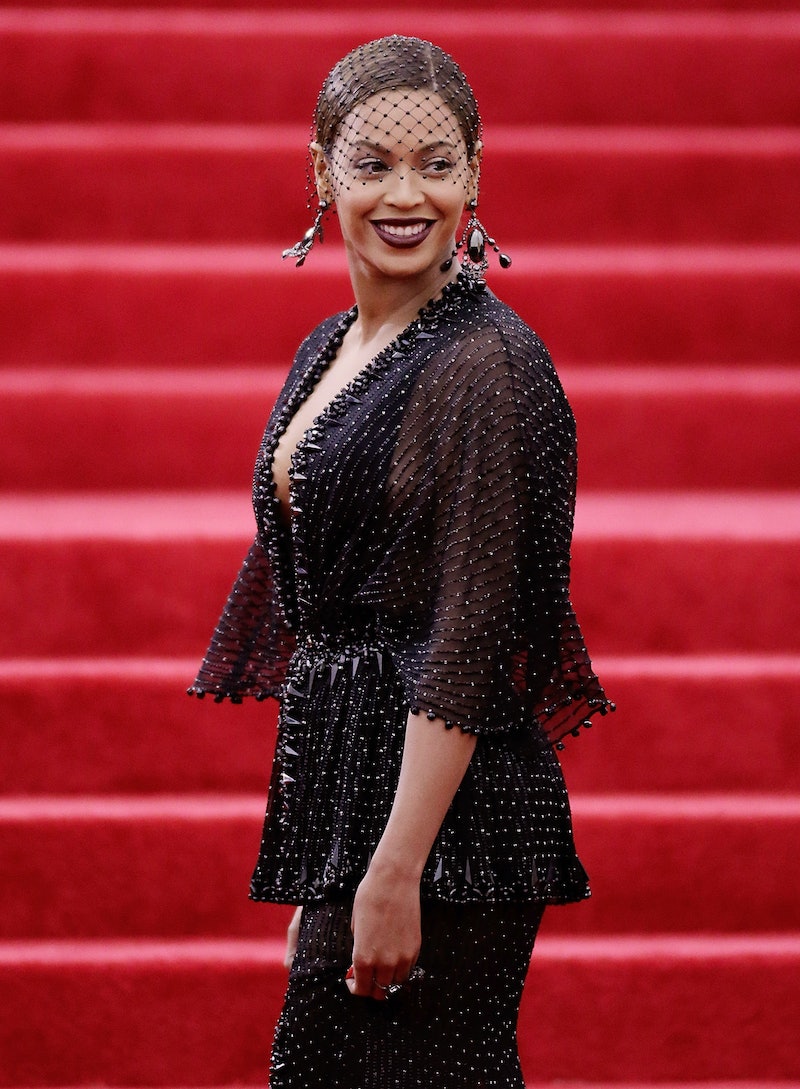 Let's take our minds off the rumors that Beyoncé and Jay Z might be getting a divorce for a moment. Musically, Beyoncé has been remaining the queen. Aside from the On the Run Tour with Jay Z, Beyoncé released a "Flawless" remix with Nicki Minaj that was the highlight of many people's weekends. Even though the remix was later remixed by Lil' Kim as part of her feud with Minaj, the fact that Beyoncé continues to churn out amazing songs (that referenced the infamous elevator incident in the cheekiest way ever) is a gift to her fans. Well, there might, in fact, be another gift on the way. Beyoncé is rumored to be collaborating with Rihanna on a remixed version of "Blow", from the Beyoncé album, and this seems like the start of an insanely amazing trend.

When Beyoncé and Nicki Minaj did the "Flawless" remix, that was a pleasant surprise. If Beyoncé and Rihanna do the "Blow" remix, this will officially be a pattern. As in we can expect more remixes of Beyoncé's songs with more artists that would (and rightfully should) jump at the opportunity to work with Queen Bey. Beyoncé definitely doesn't need my advice on how to run her career, but just in case she's out there listening then here are nine artists that I think she should do a remix with next.

Ariana Grande is basically one of the biggest pop stars in the world right now and she has an album coming out later in August. Nicki Minaj just did a song with Grande, so she could get Grande and Beyoncé in touch to start making some beautiful music together. Imagine how epic the vocals would be on that track.

Sadly, Rita Ora is one of the many alleged mistresses of Jay Z, even though she's denied that claim numerous times. Since Beyoncé broke her silence on the Elevatorgate scandal with her first remix, why not lay some rumors to rest by working with Ora on a different remix? It would give people something new to talk about, at least.

Lorde is a pint-sized powerhouse who is taking the world by storm and she has such a unique sound that it would be interesting to see how she could customize it to fit with Beyoncé's. Then again, considering much of the sexual content of Beyoncé and the fact that Lorde is still only 17 years old, maybe Beyoncé should wait a year before that remix.

I can't think of two artists who are further on the musical scale than Taylor Swift and Beyoncé. Swift might have made the switch from country to pop as her career took off, but her kind of pop and Beyoncé's kind of pop don't really gel. That's all the more reason it needs to happen. Swift could blow it in the face of every hater who says all her music sounds the same.

Considering the amazing work that Alicia Keys did on "Empire State of Mind" with Jay Z and how well she worked with Nicki Minaj on "Girl on Fire", it's a wonder that Beyoncé has taken this long to ask her to remix a song together. An all-piano version of any one of Beyoncé's recent songs with both girls harmonizing perfectly would make the Internet collectively squeal for weeks.

Am I shameless in my desperation for more Destiny's Child reunion songs? Yes? A little? Whoops.

We're currently living on the rumors that Adele is going to release her next album this year and rumors just aren't enough anymore. I, for one, need to hear Adele's voice again and fast, even if it's just on one added verse in an otherwise Beyoncé-centric song. It would be the perfect way for Adele to dip her toes back in the musical waters.

Jennifer Lopez's latest album might not have done as well as she'd hoped, but nothing boosts your career faster than appearing on a Beyoncé song. The fact that it's taken two women who are notorious for their derrières this long to collaborate on a song together is just criminal, okay?

Anna Kendrick is Beyoncé's biggest fan. And she sings. Very well, if the popularity of "Cups" from Pitch Perfect is any indication. Being asked to do a remix with Beyoncé is probably on Kendrick's bucket list, so can we make that happen for her please?