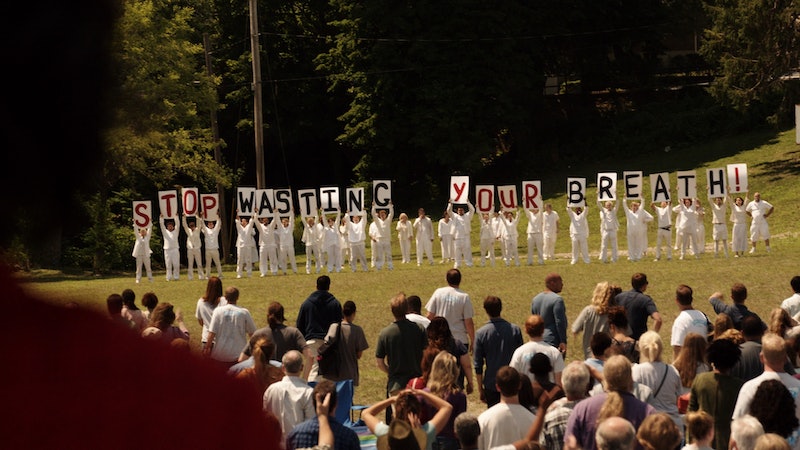 I blame Damon Lindelof. As you know — if you ever watched the LOST — this is a man who loves to string out mysteries over a looooong period of time (several seasons, if he gets his wish). So if you're a fan hoping to get answers about Leftovers ' Departure and the Guilty Remnant would get cleared up any time soon, I have some bad news. In a recent episode, the GR went on mission to steal family photos of the departed comes, which is about as cruel as it gets. But why did the GR steal the pictures in the first place? That riddle is just one offshoot of the bigger mysteries surrounding the GR.

If you were hoping that reading The Leftovers ' book "spoilers" would give you some insight into why the GR broke into people's homes to take beloved family memories, you're out of luck again. Tom Perrotta, the author of the book on which the show is based, didn't even come up with the idea: it doesn't appear anywhere in the book. Like much of the HBO series' plot, this one is all Lindelof and Co.

So what was our fearless leader thinking when he and Elizabeth Peterson wrote this storyline? Let's examine a few possibilities:

The GR are Trying to Antagonize Mapleton into "Remembering"

What exactly the GR believe to be their purpose is still not exactly clear. But their most prominent conviction seems to be that no one should "forget" the Sudden Departure. You would think that a global catastrophe is which millions of people were magicked off the planet wouldn't be so easy to forget but, for the GR, a commemorative statue and a yearly parade aren't nearly enough. They want people to devote their lives, as they have, to mourning this global loss, or repenting because they weren't good enough to be taken, or something.

Causing constant grief and pain with their presence is certainly a good strategy to make sure people don't move on. But by the time The Leftovers begins, cults have become a part of life. They're an eyesore, not a wake-up call. So the GR has to constantly up its game to get noticed. Breaking into people's homes and taking physical representations of their departed loved ones means they cannot be ignored.

They Don't Want the Departed to Be Thought of Fondly

Family photos capture joyous occasions: You don't take pictures of your children mid-tantrum, you frame their school pictures and carefully choreographed prom poses. But the GR doesn't want people thinking of their families in that way, as they were before the Sudden Departure. They want them in perpetual mourning.

Taking away the photos also send the message that, because non-cult members aren't living as the GR wishes they would, they don't deserve to be the keepers of their loved ones' memories and images. Stealing the pictures just before Christmas just reinforces the idea that people shouldn't be celebrating anything since the Departure happened.

They're Gathering Info for Recruitment

The Leftovers has made it clear that, no matter how wacko the GR may seem, it is a well organized and smoothly run operation. We've seen the files they keep on potential recruits and other townspeople — files that include photos. It was revealed in the most recent episode that Meg (Liv Tyler) has been assigned to keep tabs on Nora (Carrie Coon) and record her movements and other data. Maybe stealing the departed's photos is another strategy to learn about people they want to join their movement. We know that their tactics have been growing more brazen throughout the timeline of the show. They'll need more members, and soon, if they plan on defending themselves against the inevitable backlash.

They're Preparing for Their Most Awful Crime Yet

In the promo for this season's final three episodes, we see Patti (Ann Dowd) laying out dozens of outfits while reading from some sort of binder. What could she be up to? Oh, just the most cold-blooded, vicious act you could think to do to someone who's lost a family member. Reddit user AgentBarcode hypothesized that maybe the GR stole the photos to create life-sized replicas of the departed, which they intend to sneak back into their families' homes.

There are clues that this theory could be correct. First, Patti's binder looks like it could be a photo album, or it could contain the files the GR keeps on Mapleton residents.

Second, Lindelof has demonstrated how much he loves mirroring imagery and reusing symbols throughout The Leftovers' seven episodes. If the show were to include these dolls, it would be a nice reference back to Nora's encounter with the burial doll salesman at the Departure Related Occupations and Practices conference in Episode 6, as well as to the doll factory sequence that opened Episode 4.

And third, leaving extremely accurate plastic likenesses of the departed in their families' homes is probably the meanest thing you could do to these people — which means it's exactly up the GR's alley.

If nothing else, these guys are turning out to be TV's greatest trolls.