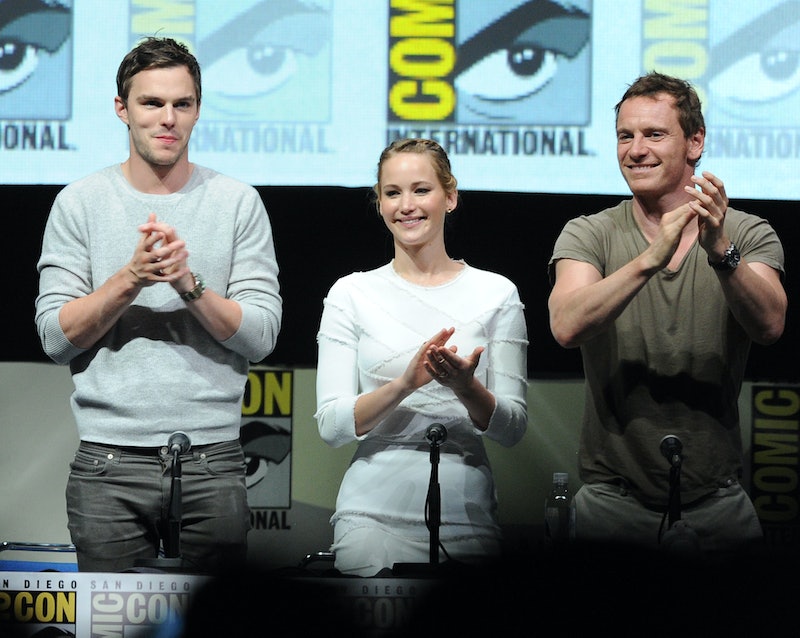 If you've been around a computer or a television in the past few weeks, you may have heard that universally accepted favorite person Jennifer Lawrence was connected to some pretty disheartening news. Earlier this month, it was reported that Jennifer Lawrence and Nicholas Hoult broke up. Yes, breakups happen every day to all sorts of people, not just celebrities, but it's always a bit sad to see two people who love each other go their separate ways for reasons beyond their control. (Except now she's apparently dating Chris Martin, so I guess all is well for our girl...)

As previously reported, much of the to-do in the ongoing J. Law-N. Hoult relationship drama saga isn't really drama at all. I mean, this is Jennifer Lawrence we're talking about. The most level-headed, down-to-earth, low maintenance starlet there is. The split happened just because of unfortunate, real life adult issues that came into play, like scheduling conflicts and having a busy career. It all sounds very cliche until you realize that, yeah, it must be exceedingly difficult to maintain a relationship with someone when you're moving to a new city every few months to film a different movie. Not only is it hard for the significant other, it's a mental toll on the person who has to live the nomadic life as well. And, by the looks of both of their successful careers, neither Hoult nor Lawrence show any signs of slowing down.

So, because of that, the X-Men couple split for the second time. The first time around, in 2013, Lawrence and Hoult split for the same reason: they were really busy and long-distance wasn't working. But, to be fair, they've been together for the better part of three years as they started dating in 2011. That's a long relationship for anyone in their early 20s and then magnify that by the fact that the two had to experience it in a fishbowl. So, more than anything, their second break up is completely understandable and I just hope that the focus will stay on both Hoult and Lawrence's unparalleled talent rather than their status as partners. (Even if she really is dating, Chris Martin.)

More like this
Kim Kardashian & Pete Davidson’s Relationship Timeline From Start To Finish
By Jordyn Tilchen and Bustle Editors
Who Is Camila Cabello Dating? She's Getting Cozy With Lox Club CEO Austin Kevitch
By Radhika Menon
'A League Of Their Own' Star Abbi Jacobson Is Engaged To Jodi Balfour
By Jake Viswanath
Kanye West Has The Most Kanye Reaction To Kim Kardashian & Pete Davidson's Split
By Jake Viswanath
Get Even More From Bustle — Sign Up For The Newsletter