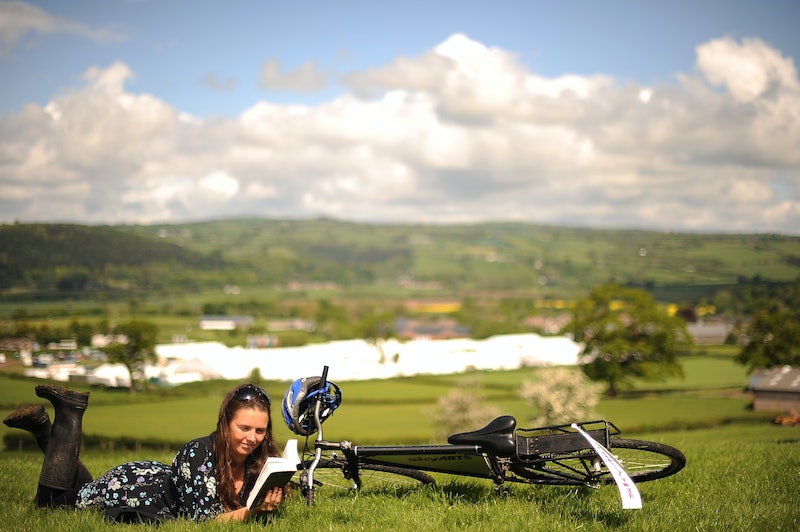 No matter what era you grew up in, teenagers, who have been considered a separate demographic in literature since post-World War II, have a lot in common. We all went through awkward dates, pimples, and periods. Regardless of whether we're talking about kids from 1950 or today, we can identify with each other on some level about how much things sucked during that teen time, 'cause we all had to face lots of the same shit.

But then, of course, there are differences. Some would say it's harder to be a teen today than it was 50 or 60 years ago... but some have not read books from that era. The titles on this list highlight what teens had to deal with before a time of being dumped via text.

The female protagonists in these retro-reads embody stereotypes of teen girls of the past — they fret beside the phone, they don't EVER make the first move, they dream of marriage and children. They let men lead the way... mostly. As we move from decade to decade, the women become more of what we recognize in women today, but you'll still see some big chasms. The covers alone are amazingly decade-nt (see what I did there?) and the plotlines are adorbs*.

Make the decision for yourself as to whether you were happy you went through your teens when you did... and as long as I have your attention, I should warn you that most of these main characters only wash their hair once a week. And this was before dry shampoo.

Seventeenth Summer is considered the first book published specifically for a teen audience. It's the summer after senior year of high school, and Angie is just beginning to date. She's been very busy up until now, helping with dinner, knitting, and sitting in the garden, so it isn't like she's had a whole ton of free time. She is instantly drawn to Jack when he smiles at her (woo woo!) at... wait for it... the drugstore. You know, where everyone drinks their root beer floats and the "looser" girls might be seen necking with older boys. Necking. Slang and social scenarios date this novel, but the story of first love (can it last come fall?) will give you all those flowery let-me-carry-my-special-silk-hanky-around feelings.

Jane's been unsatisfied with bumbling, boring George's attempts at romance for some time now. She cannot believe when popular, dreamy Stan Crandall asks her for a date. The anxiety of her first crush is palpable and sometimes painful as she chooses her outfit, washes her hair for a SECOND time that week, and worries that she is not nearly pretty or clever enough for Stan to actually like her. This novel could be titled Fifteen: Extreme Waiting for a First Kiss That Probably Will Never Happen Because Everyone is Very Prude. I want to go on a '50s date — ride in an older boy's convertible, stop for a malt, do some light hand-holding — a) at the drive in or b) parked at Lookout Point. I'm all tingly thinking about it.

Penny, a no-nonsense, tomboyish nurse, just graduated from school and gets the opportunity of a lifetime — to travel to the French Alps for the Olympics! There is a handsome physician; an impulsive male Olympian; and, of course, Penny . Turns out, in the '70s, nurses still wore that all white skirt/shirt combo with the little hat. The sexism and stereotypes are rampant. Women tend to the men, men encourage women to be daring, and pretty much all the French people are named Pierre or some version of Pierre. That said, there is romance (see also: hand-holding and necking) and some slight danger (avalanche, misunderstanding of French people) which is pretty awesome. I've read this about seven times.

Happy Endings Are All Alike by Sandra Scoppettone, 1979

This one was NUTS for 1979. High school grads Jaret and Peggy are in love. They aren't ashamed of this love, but they know that lesbians are still not accepted by many. From this cover (there are many versions) it is clear someone is REALLY unhappy about their relationship. This is a love story, thriller, and mystery, and I almost can't be sarcastic about any of it because it is amazing today and was a huge step in LGBTQ lit for the late 70's. It was only one of three books featuring any type of lesbian characters and was critically acclaimed.

*This last one is not all adorbs. It is sad and scary as hell.