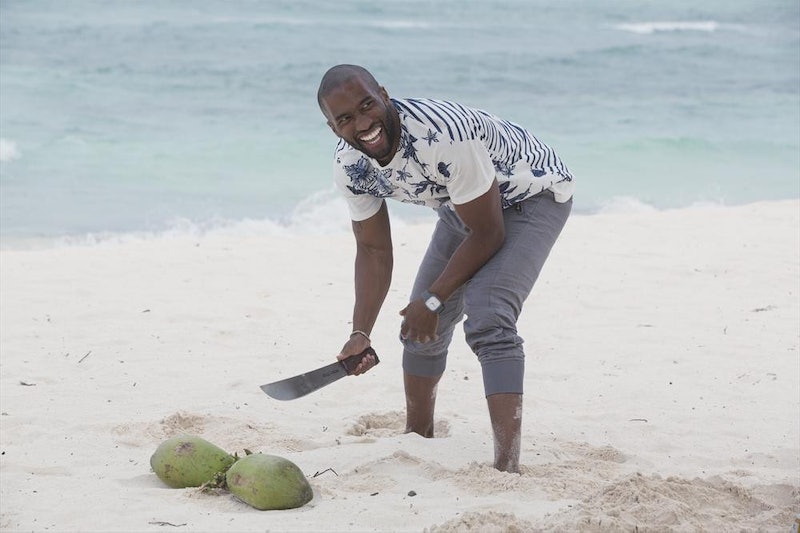 Out of all the many contestants on Bachelor in Paradise, Marquel Martin has been a favorite early on. He's good looking, he's well dressed, and until this week, he was nothing less than nice. Just before the rose ceremony, Marquel commented to Michelle Money, who he's been flirting and hanging out with, that he was unsure that they'd be a good pair because she "drinks a lot." Hmm … that's interesting coming from the guy guzzling out of the giant, full glass of wine in his hand.

It's no secret that all of the cast members on Bachelor in Paradise have been drinking a lot. In pretty much every scene, they're either relaxing with a drink and having a good time, straddling one another in the ocean, or sitting around doing absolutely nothing. The drinking comment is as if Marquel chastised her for spending too much time wearing a bathing suit. It's just weird. They don't have to go to work, take care of kids or family members, and don't even have to drive themselves home. Unless someone has a substance abuse problem, there's literally no reason for them not to drink while in Tulum. It's a paid, televised vacation after all. And it's not like Marquel isn't indulging with the rest of them.

There is one outside shot that could make sense of the comment: Marquel could have subtly been referring to Michelle's outburst at Ben, which was a little oddly intense and may have been motivated by excess alcohol consumption. It would have been one thing if Ben was stringing along a girl in the house while he knew he had a serious girlfriend back home, but everyone kind of knew that Ben was sort of coasting by without making a strong connection with anyone, and he quickly admitted that the girl he'd been seeing was only a relationship of a few weeks, but that he should probably go home right away. No reason for an emotional outburst.

But either way, calling out the girl who's most likely going to keep you on this show isn't just rude, it's kind of dumb. Was that simply his way of telling Michelle that he wanted to let her down easy? That’s a pretty passive-aggressive way of breaking up, and one that's pretty much the polar opposite of the clichéd but kind "It's not you, it's me." Marquel was basically saying "It's not me, it's totally you and you should feel bad about it."

(Poor Robert must be pulling his hair out over this. He's nice to everyone and keeps getting passed over by girls he thinks he has a connection with. First Lacey, then Clare, now Michelle . . . and for a guy that drink-shamed her, too. We'll see if Sarah's pity rose turns into anything, but right now his only hope is one of the two new girls due to show up next week.)

And despite the semi rejection, Michelle took Marquel's admonishment pretty well (I probably would have smacked him, but that's why real people don't appear on Bachelor in Paradise), and even ended up picking him to give her rose. And unlike Dylan, who turned down a rose from Elise because he thought they had no potential, Marquel accepted Michelle's rose with a smile. Maybe she saw or heard something that the editors left on the cutting room floor, but after the rudeness of that comment, Marquel certainly isn't as perfect as he seemed.