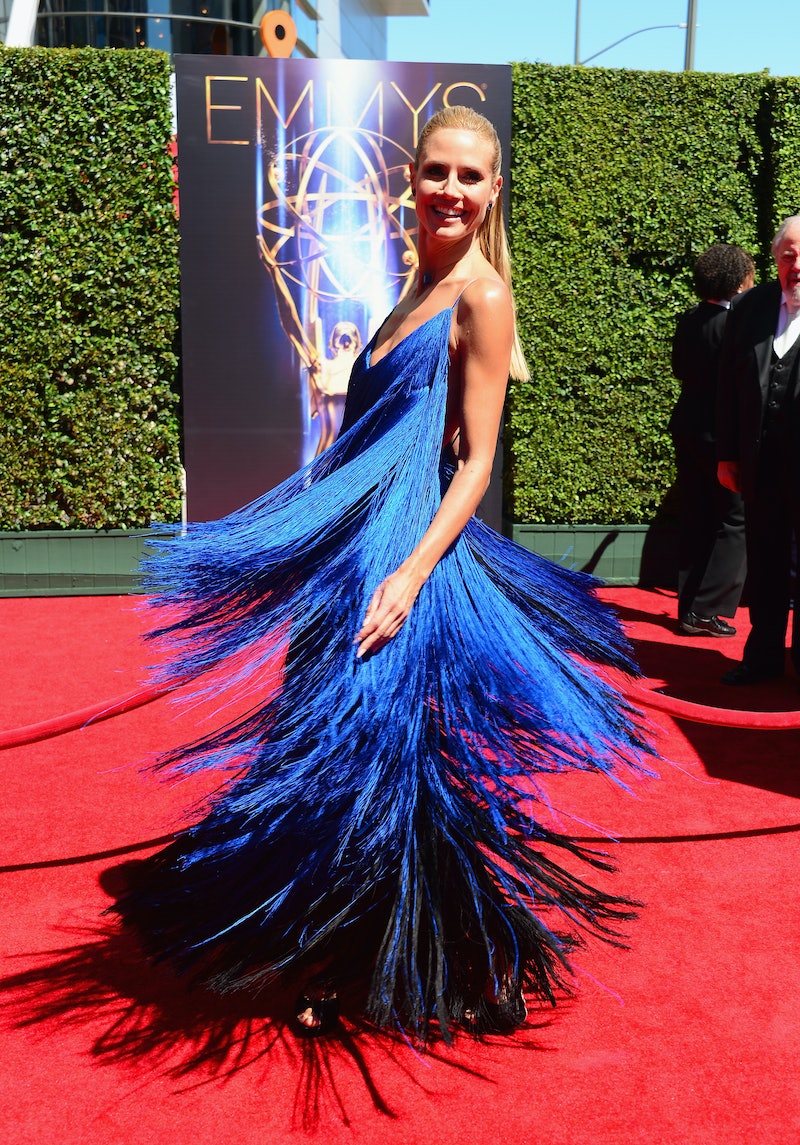 As a dedicated fan who’s watched every single episode of Project Runway since the first season debuted back in 2004 (and I don’t even mean watching it in an ironic, love-to-hate-it way), I couldn’t be any happier to type this next sentence: Heidi Klum wore a Project Runway contestant’s dress at the 2014 Creative Arts Emmy Awards and looked utterly, completely, drop-dead gorgeous in it. (And no, it wasn't created by Season 13's fäde zu grau.)

Though I typically wouldn’t assume that an electric blue, all-fringe number would land atop any awards show’s best-dressed list, that certainly was the case for Klum at Saturday’s Creative Arts Emmys (an awards show at which Orange Is the New Black's Uzo Aduba took home an Emmy, just so you know!). Designed by Project Runway Season 13 contestant Sean Kelly, the '70s-inspired, V-neck, and plunging-back gown — which was made up entirely of ombre fringe, to boot — flowed like a dream over the supermodel and Lifetime host’s curves.

Naturally, Klum’s glamorous, bold, and precisely made gown can only mean one of two things: Either the 25-year-old, Brooklyn-based Kelly has some Christian Siriano-like talents, or Klum’s best Project Runway critiques are finally falling on eager-to-please ears.

Though the dress is certainly impressive from the front — making Klum look more statuesque and stunning than she already is — it was the back that really made this dress a red carpet masterpiece. Featuring a down-to-there cut and two teeny-tiny, matching blue straps, the backside of the gown is where Klum really gets to "make it work," as the lovely Tim Gunn would say.

And speaking of Gunn, the two Project Runway stars seemed to have quite a blast together on Saturday's red carpet, with Klum twirling around (constantly) in her fringed Sean Kelly number and Gunn playing along nicely with his adorable faces and charming reactions.

Though the Project Runway Season 13 winner has yet to be revealed, we can all rest easy knowing that if Kelly takes home the top prize, there's at least hope that we'll see more fabulous designs like this one strolling down the red carpet.