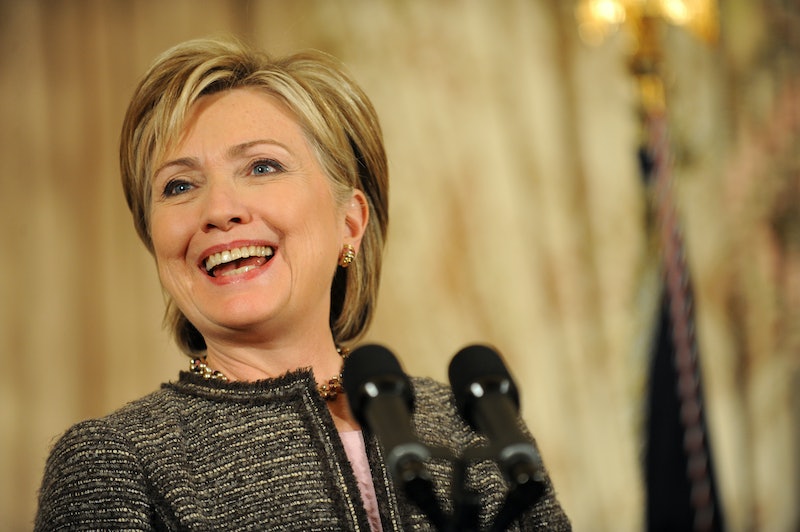 Even the biggest "free market" Republicans have gotta hand it to Hillary Clinton on this — she's on top of her game, money-wise. According to a report by The Las Vegas Review Journal, Clinton's speaking fees are pretty high, with an upcoming appearance at a University of Nevada, Las Vegas Foundation fundraiser netting her a cool $225,000. The Review Journal said they confirmed that figure through a request under Nevada's state public records law. But it's being presented in a larger context than just musing about the earnings potential of a possible 2016 presidential contender. Rather, it's all part of questioning whether Clinton will be tagged with that dreaded three-word label: "out of touch."

It's a predictable question. Beyond the speaking fee, the Review Journal also cited the plush accommodations (more or less exclusively presidential suites) and private jets required to draw her appearance. And independent of political party, the effect of long-term wealth on politicians' ability to relate to the public is a fair consideration.

But Clinton also often absorbs undue, double-standardized criticism about these kinds of issues, so it practically screams the question: Are Hillary's fees out-of-step with prominent politicos, or is this a familiar, sexist cry? Maybe a look at some other public figures' speaking fees will help figure it out. The following numbers were reported by the Washington Post:

If you're a politician worried about your personal wealth coming back to bite you, there's no more cautionary tale to look at than Mitt Romney. In a campaign riddled with gaffes and awkward moments, few thing shone through as sharply as Romney's stilted way of talking about his wealth.

But in the run-up to the 2012 presidential election, he didn't reel in nearly as much as Clinton did per speaking appearance. Nor, frankly, does he need to — he's worth vastly more than Clinton, with a fortune estimated at well over $200 million.

Even former presidents can haul in less than Clinton does for a speaking engagement — but of course, that depends of which president you're talking about. If you're talking about Clinton's husband Bill, well, he's right up there in that rarified air — he brings in around $200,000 per appearance, and earned more at last year's UNLV event than Hillary will this year.

If you're talking about George W. Bush, on the other hand, he of cratered approval ratings and haphazardly-planned exit strategies, the earning potential isn't as high. But the prestige of the office always carries a benefit — he's brought in an average of $110,000 per appearance.

Former Vice President Al Gore is beating his old rival George W. in at least one way — he demands a hotter ticket price. Gore averages $157,000 per speaking appearance, and he's done a lot of that since leaving office in 2001. His climate change advocacy and investments in green technology have put him at the forefront of establishment environmental rhetoric. They even made a movie about it, which you've probably heard about.

He still can't measure up to Clinton, however — she dwarfs his average earnings, predictable given the career that could still be ahead of her, while Gore's political aspirations appear to be nil.

Ding ding ding, we have our winner. You can't say Clinton's speaking fees are unprecedented, at least not as long as Rudy Giuliani is around. The former mayor of New York City (who ran one of the weakest presidential campaigns of all time) was a speaking circuit behemoth in 2007, raking in $270,000 per appearance.

. . . But None of Them Have What Hillary Does

These are all useful comparisons, and heartening in their own way — women typically earn less than their male counterparts in America, after all, so it seems a bit rich for anyone to knock one of the country's most accomplished women for flipping the script. And in each of these examples, there are very clear reasons that explain her out-earning these other vaunted figures (except Giuliani — who on earth wants to host that guy so badly?).

In Romney's case, both he and Clinton were front-running presidential contenders, but with vastly different personal histories and levels of cultural import. While Romney was a fairly traditional, wealthy pro-business Republican, Clinton's status as a potential female presidential contender is anything but traditional. And in the cases of Bush and Gore, both men's political careers are clearly over — Gore's by choice, and Bush's by term-limit.

Basically, Clinton is at both the height of her earning power, and the height of public attention directed toward her future political plans. She's a very important woman, and she knows it, and she's aiming to get paid commensurate to that importance. If you want to object to politicians getting this kind of red-carpet treatment, that's one thing. But whatever you do, don't only start complaining about it when a woman does it.