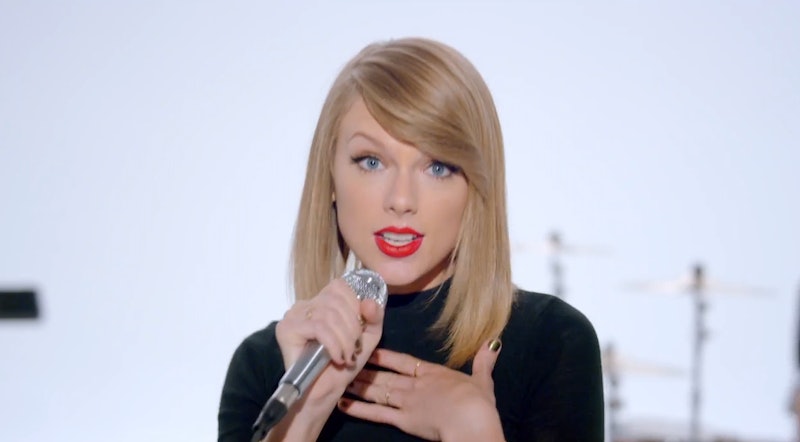 On Monday, during a highly anticipated and exciting live stream, Taylor Swift premiered the music video "Shake It Off." "Shake It Off" is the first single from Swift's upcoming fifth studio album, 1989, which will be released on Oct. 27. During the live Yahoo! event where she premiered the video, Swift talked to her fans about the joy of just dancing how you want to dance and not caring what anybody else thinks of you.

Swift's words echoed comments she made last week during her appearance on Late Night with Seth Meyers , where she explained her sometimes awkward dancing at awards shows. According to Swift, a couple years ago, she just decided that she wasn't going to let herself be intimidated by award shows anymore. Now, she just enjoys them for what they are: "the coolest concert[s] you could ever go to." She doesn't care how weird you think her dancing is — she's just having fun!

Doing your own thing and not paying attention to what others have to say about you is really the overarching theme of Swift's new single. In the "Shake It Off" clip, Swift dons a variety of different costumes as she tries out a bunch of different dance styles, showcasing some of the awkward moves she's become known for along the way. Swift's willingness to embrace her awkward side is just one of the many things that I love about her. Honestly, we could probably all learn to let loose and "shake it off" a little more often!

Let's take a look at Swift's most adorably awkward moments from the "Shake It Off" music video:

When She Breaks It Down During "Swan Lake"

When She Misunderstands Contemporary Dance

When She Drops Her Pom-Pom

When She Dresses Up Like Your Aunt Sheila as Lady Gaga

...And Then Does The John Travolta

When She Can't Do Whatever Finger Thing This Guy Is Doing

When She... Gracefully Ribbon Dances

When She Tries to Look "Hard"

When She Makes This Face

...And Then This One

When She Becomes a Rabbit For Some Reason

...And Then Does the Air Trumpet

...And Then Falls Down

You just gotta love her. Check out the full "Shake It Off" music video via Swift's official YouTube channel below.