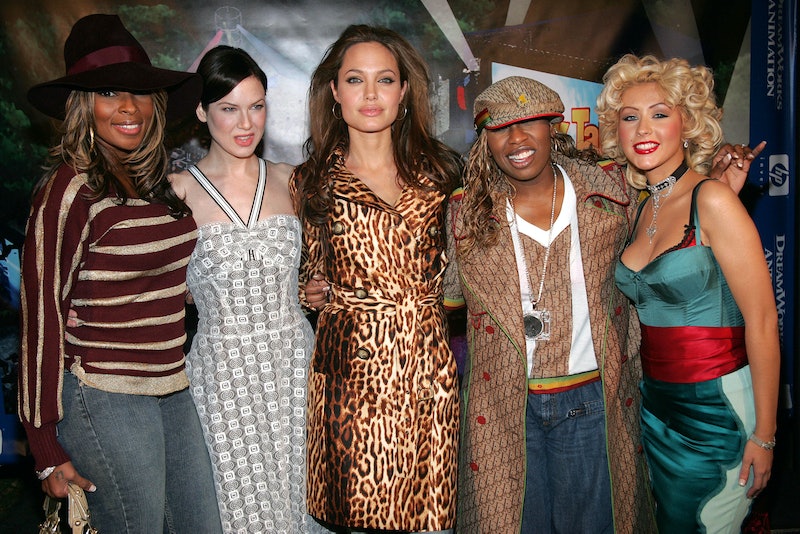 As a general rule, awards shows tend not to change too much over the years. Take the Emmys, for instance: between the movie star nominees and the AIDS-focused TV movies, this year's ceremony is practically the same as the one the world watched in 2004. The same goes for the MTV Movie Awards, or even the Oscars — but the VMAs? Each year's show is as different as can be from the one before it, let alone the one 10 years in the past, and the 2014 VMAs, airing on Aug. 24, is certainly no exception.

Sure, this year's VMAs features a couple of nominations for Beyonce and a performance by Usher, just like 2004's show, but past that, practically nothing about the show looks like it'll be at all similar to the one that aired a decade ago. In fact, the differences are almost comical; who would've thought, 10 years ago, that something called an "Iggy Azalea" would be up for the most nominations and that Billy Ray Cyrus' pre-teen daughter would've made the most controversial video up for the show's biggest award? A lot about pop culture has changed in 10 years, and nothing shows that better than looking back at the 2004 MTV Video Music Awards and comparing to today:

It was Britney vs. Christina

Ah, remember the days before "Hey Girl" memes, when the most important export from the Mickey Mouse Club wasn't Ryan Gosling, but two women named Britney and Christina? The pop divas' rivalry was the stuff of legends, and while the singers were already heading off in different directions by the time 2004 rolled around, the VMAs picked the competition right back up. Spears and Aguilera vied for Best Female Video, although both of them lost to Beyonce. Today? Neither singer is up for any VMAs, although Beyonce is doing just fine.

Nominated for Video of the Year. Winning two categories. Performing a medley of two songs, "Confessions Part II" and "Yeah." In 2004, Usher-mania was at its peak, and the VMas made that loud and clear. At the 2014 ceremony, the singer's up for one award, and he's set to perform his song "Good Kisser" during the show, but overall, his superstardom has certainly died down.

Justin Timberlake Was Branching Out

Although most of the songs off his debut solo album, Justified, were up for VMAs in 2003, one song, "Senorita," made it into the 2004 ceremony. Fun fact: it was co-written by Pharrell, then still known best as a member of production duo The Neptunes. This year, Timberlake's again up for just one award, a duet with Michael Jackson, although Pharrell's up for four. Ah, how the times change.

Along with Maroon 5, JoJo, Yellowcard (remember "Ocean Avenue?!") and two now-broken up bands. Maroon 5 won, but personally, I would've given the honor to Jojo for her "Leave (Get Out)" music video. Now that was a classic. Today, there's no Best New Artist in a Video category, although Artist to Watch contains musicians like Sam Smith and Charli XCX. As for Kanye? Safe to say he's doing all right.

And Dave Chappelle presented him with a gift for her retirement on-stage. If that seems like it makes no sense, it's because Jay-Z was back making music just a few months later, and today, he's as busy as ever — not to mention a VMA nominee in two categories.

Upbeat, simple, and apparently the only song anyone in the world wanted to hear for several months despite it becoming incredibly annoying somewhere around the 1000th listen. "Hey Ya!" earned Outkast five nominations, including a win for Video of the Year. It was everywhere. A few years later, though, Outkast had faded, and today, it's their festival reunions, not new music, that have fans most excited.

And that's not even including the Olsen twins' introduction of Jessica Simpson, a nominee and performer for "With You." The mid-'00s was a dark time. Then again, this year's show promises Miley Cyrus, Katy Perry, and Ariana Grande — what's to say that a decade from now, they won't be as hilarious to remember as the presenters way back in 2004? Only time will tell; for now, let's just enjoy all the girl-power pop music they have to offer.