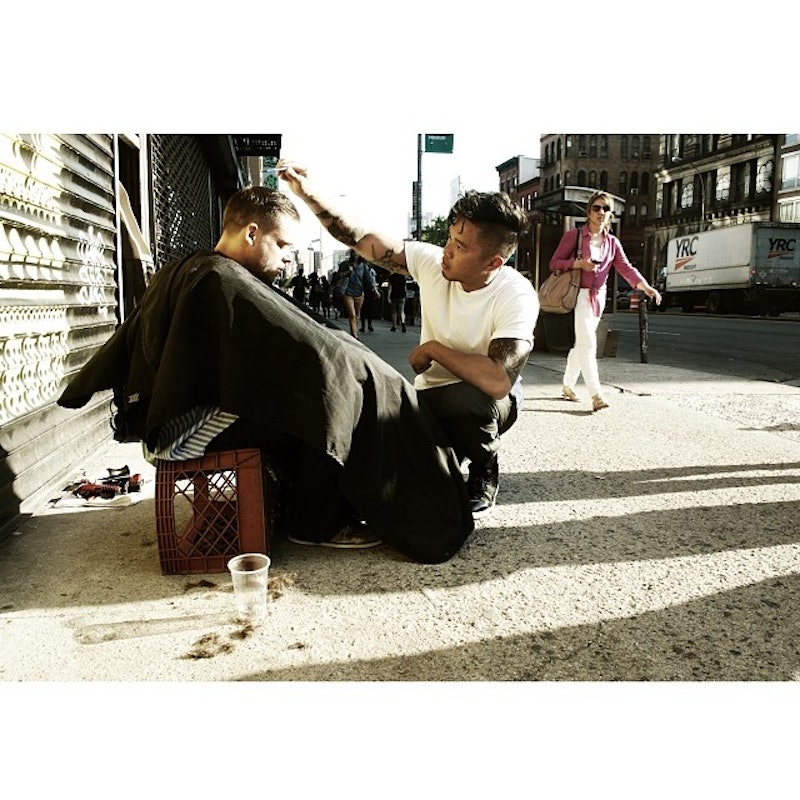 The news is often disheartening, especially this past week with the ongoing violence in Ferguson, Missouri, and so the rare days when happy stories take the media by storm are always welcome. Today that story is about NYC-based stylist Mark Bustos who gives free haircuts to the homeless each Sunday. Just one look at his Instagram account will make you feel infinitely better about the state of humanity.

Bustos is employed by Three Squares Studios, an upscale salon located at West 17th Street and devotes his only day off each week to giving stylish haircuts to the homeless men and women of the city. According to Huffington Post, he starts each interaction by saying, "I want to do something nice for you today" and asking the client what they'd like done to their hair. This alone is kind of a big deal. Think about it — most people avert their eyes in discomfort when they pass someone homeless on the street. Being directly approached, spoken to kindly, and offered a favor must be incredibly touching to a group that is severely marginalized.

HuffPo reports that Bustos began this practice back in 2012 while traveling abroad in the Philippines (he's also cut hair in Costa Rica, Jamaica, and Los Angeles). Now he spends each Sunday traveling around New York City, averaging about six haircuts per day. He treats his homeless clients same way he treats paying clients, giving them his signature edgy haircuts and asking for feedback.