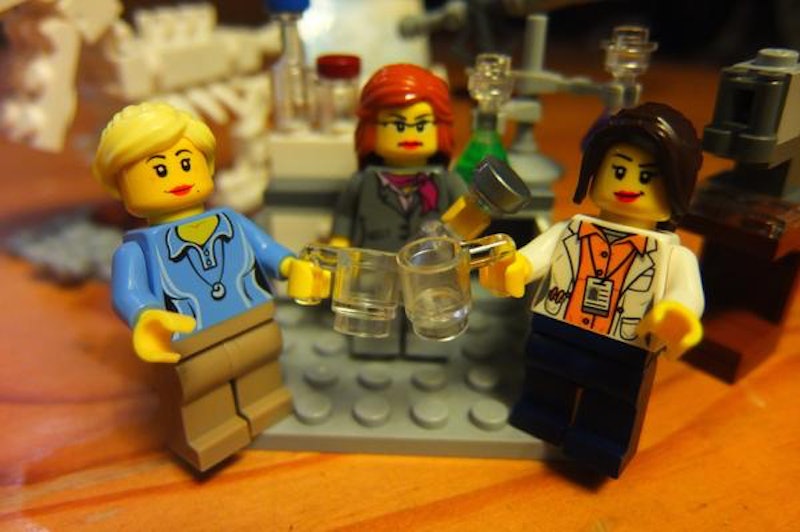 I think I speak for most people when I say that I spent a good chunk of my childhood playing with LEGOs, and the multi-colored building blocks with their tiny yellow people will forever hold a special place in my heart. So when I found out that someone had created @LEGOAcadamics, a Twitter account featuring LEGO's new “Research Institute” set of all-female scientists, it goes without saying I was pleased beyond measure. This account has just about everything I love — LEGOs, nerdy academia jokes, LEGOs, women in STEM fields, LEGOs, Twitter, and did I mention LEGOs? Seriously, guys, this account is great.

LEGO has recently been getting better about representing women in traditionally male-dominated fields. In less than a year, they went from having no scientists figurines that were identifiably female to featuring their first ever obviously female scientist to then coming out with the "Research Institute" mini fig set, which featured only women scientists (and which sold like hot cakes). It's some much-needed progress from a company whose products have been heavily reinforcing gender stereotypes for a while now.

And now real-life archeologist Donna Yates has decided to put that new "Research Institute" set to good use and bring the world a Twitter account dedicated to tiny, yellow, female scientists doing all the things that tiny, yellow, female scientists do. And the results are just great. If you're someone who's familiar with the life of a scientist or just someone who loves LEGOs, you need to follow this account.