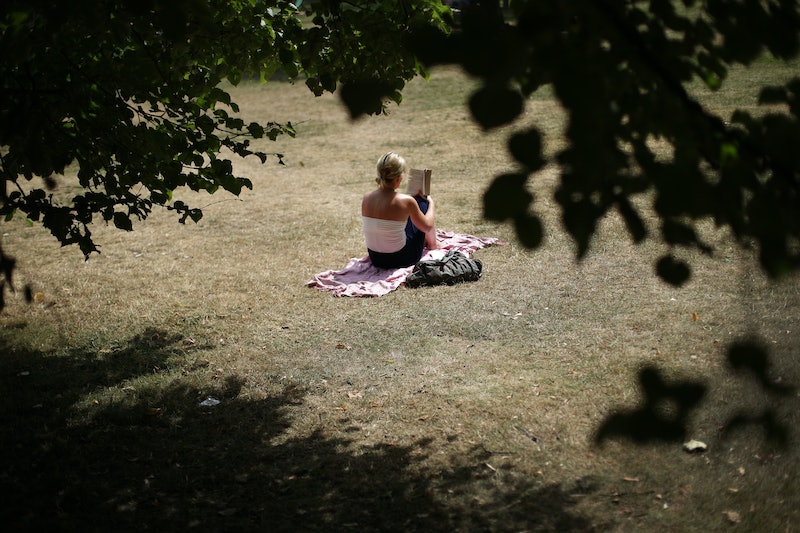 Leslie Jamison. Roxane Gay. Chimamanda Ngozi Adichie. Astra Taylor. Need I continue? 2014 has been very good to those with a penchant for nonfiction — and for those of us without, very good at luring us in.

I’ll admit that I fall into the latter camp. With a literary diet that’s almost exclusively fiction (except this book over and over — forever), I’ve found myself immersed in a world of essays and memoir like never before. And September, with its insane repertoire of stellar releases, will steadily continue this trend. So much so, in fact, that for the first time ever on Bustle, I decided to give nonfiction its own dedicated list.

So, nonfiction, the spotlight’s all yours: There’s a deep look into fashion; a memoir on a gender transition that’ll hit you right in the gut; a curiously hilarious tale of hours passed in a mortuary; a couple of titles for the side of you that never left college; a book that’ll feed your fiery feminist; and, of course, Lena. Spending this month reading for this list stretched me in a way I’m not used to being challenged, so if you’re regular a fictionaut like me, I dare you to pick up something from the below to shake up your fall, too.

When you're done, come see our picks for September's best fiction and best YA, too.

What happens when Roxane Gay, Lena Dunham, Tavi Gevinson, Cindy Sherman, Kim Gordon, Rachel Kushner, and Kate Zambreno (that’s just the start, really) are sourced for a book helmed by Sheila Heti, Heidi Julavits, and Leanne Shapton? A beautiful visual tome of interviews, conversations, illustrations, photographs, diagrams, and essays all bound by the language of fashion. The text intelligently addresses topics like race, love, bodies, and politics, and as you hold it, its physical weight at 515 pages speaks to the enormity of its range and the scope of its discussions. Sure, we can write off fashion as frivolous, and at times it is — but when it goes deeper, its voices have much to say. Six hundred forty-two of them have captured just that.

“Being human means being at the mercy of others,” Thomas Page McBee points out in Man Alive. It’s one of the many sobering observations he makes in the lyrically written memoir of his transition from female to male. Narrating a series of snapshots of his childhood and twentysomething life, McBee explores not only what defines a man through dissecting his traumatic history, but the mark he’ll make as he mints his identity as male. The book reads like fiction — it’s smooth as butter — and you’ll digest it in just a few hours. What’ll last, though, is McBee’s humility, and the insight of his lessons, and his meditations on love. In a journey to which you might not think you can relate, you’ll find something on nearly every page that’ll resonate.

So We Read On: How the Great Gatsby Came to Be and Why It Endures by Maureen Corrigan (Little, Brown; Sept. 9)

The Great Gatsby’s stature isn’t something that needs debate here — we don’t know the last line of, say, the The Scarlet Letter the way we do Fitzgerald’s masterpiece despite being introduced to it at roughly the same time. But although we know Gatsby’s a pretty great American novel, NPR Fresh Air’s Maureen Corrigan argues most don’t how great it really is. In So We Read On (a reference to that famous last line), Corrigan lays out what makes Gatsby so insanely special through delving into Fitzgerald’s life, the text itself, and her experiences with it. Bottom line: We were all too young to appreciate anything the first time we picked it up, so you have to read it having lived some life — and with some context. Oh, and if you think you’ve read it and dissected it, you haven’t. Gatsby is a book that keeps on giving, and Corrigan shows you how. So We Read On is a bit of a bibliophile’s book, OK, but anyone with a great appreciation for biography and literary culture will love this, thanks to Corrigan’s flowing language and keen knack for details — she is a critic, after all.

Smoke Gets In Your Eyes: And Other Lessons From the Crematory by Caitlin Doughty (W. W. Norton; Sept. 15)

Smoke Gets In Your Eyes is unlike anything you've ever read: It stares the subject of mortality right in the face, confronts it . . . and then does a little polka with it. Dying isn't supposed to be hilarious, but twentysometing mortician Caitlin Doughty's tales from her life in the death industry are sidesplitting and curious. Including the first time she ever felt a human skull crush in her hands — oops! — and exactly what it's like to be covered with people dust, Doughty tells in a unique, self-deprecating way her own story while shedding light on practices that are often swept under the rug. You'll learn a lot about culture and taboos from this memoir, which is witty, smart, and strangely addictive.

If Laurie Penny makes one thing irrefutably clear in her hit-the-ground-running book of criticism, it’s that feminism doesn’t have a definition that fits into a tidy box. “Feminism isn’t an identity. Feminism is a process,” Penny writes. Turning on their head ideas of sexuality, identity, class, gender, and what the hell a woman exactly is or should be (hint: anything you damn well please), 27-year-old Penny intimately approaches often tired subjects with an incredible fire that sets aflame everything you thought you had concrete opinions on. For instance, do you really want to be a woman who has it all? Of course. Well, according to Penny, maybe not — what society outlines as “it all” turns out to be a pretty meager existence once she delves into it. Few so-called feminist texts get the label of “thrilling” — but Penny’s work deserves it.

On Immunity: An Inoculation by Eula Biss (Graywolf Press; Sept. 30)

Before you slowly back away when I tell you that a book all about vaccinations is one of the best I’ve read this year, hear me out. Eula Biss’ essays about immunizations and the anti-vaccination movement (Jenny McCarthy, anyone?) is one of the most intelligent and eloquent collections you’ll encounter. Biss talks about the actual safety of vaccines and the research behind them, yes, but she also underscores how they represent wider cultural implications of fear, safety, and the way we think as a whole society as she brings in the works of scholars, philosophers, and doctors. It’s surprisingly accessible for the dense material it tackles because of Biss’ emotional investment (her son was born at the height of the H1N1 epidemic) — and if you want to sock it to the anti-vaxers, this little 200-pager should be in your queue.

Not That Kind of Girl by Lena Dunham (Random House; Sept. 30)

I’ll sheepishly admit that I’m not that familiar Lena Dunham's past work. However, everything that’s been said about Not That Kind of Girl (plus after reading this excerpt on The New Yorker) makes me want to dive head-first into Dunham’s quirky world — and that’s why this book is one of September’s most-anticipated titles, if not one of its best. Being held tightly under lock-and-key until its end-of-the-month release date, Dunham’s book of personal essays is said to be hilarious, insightful, and, most notably, grown up. Sign me up; I’ll report back in October.

More like this
Steve Banerjee's Wife Irene Sold The Chippendales Brand Prior To Her Death
By Brad Witter
Casey Anthony’s Father Said He Was “Ready To Forgive Her” Before She Renewed Allegations
By Brad Witter
Where Is John Leonard Now After Suing Pepsi For A Harrier Jet?
By Brad Witter
Amanda Gorman Shared A Powerful Message On Meghan Markle’s Penultimate Podcast
By Darshita Goyal
Get Even More From Bustle — Sign Up For The Newsletter