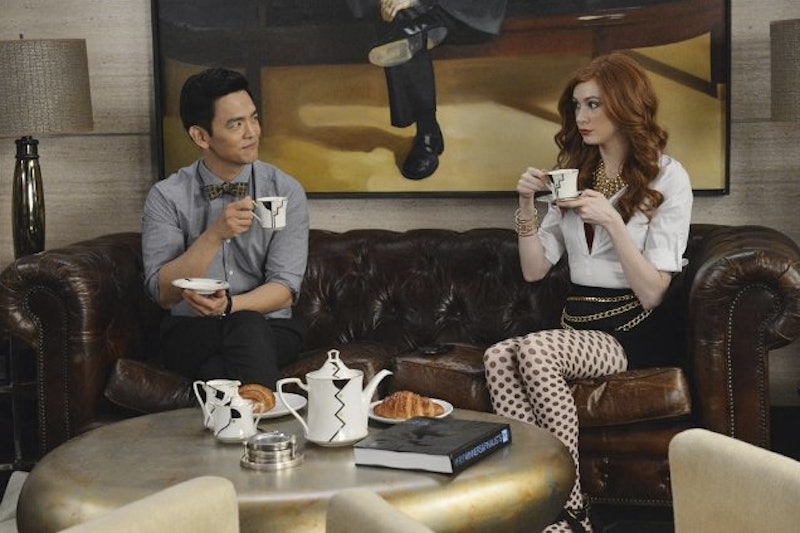 When it comes to Selfie, there's a lot to get excited for. I mean, it stars Karen Gillan and John Cho, it's a modernized take on Pygmalion (and modernized classics are always the best: watch Clueless, She's The Man, and 10 Things I Hate About You, if you don't believe me), and it's kind of revolutionary in the whole Asian American male lead department. Another thing to get excited about? The clothes.

As it's basically My Fair Lady, there's definitely a makeover scene (or rather, "makeunder" — watching Eliza Dooley glibly remove her push-up chicken cutlets and butt pads was kind of hilarious). But in all honesty? I'm a fan of both the before and the after looks. And her "hipster street cred" neighbor + book club (who all have names reminiscent of the fairies from A Midsummer Night's Dream) boast some pretty adorable Zooey Deschanel-lampooning style as well.

Since the pilot was released on Hulu a little more than a month early, I watched it twice (it was really, really good — chock full of spot-on pop culture references and off-the-charts chemistry), and screenshotted all of the best ensembles. Let's take a look, starting with the adorkable neighbors:

See? They totally have names like Midsummer fairies! Also, I'm basically one of them, because:

All very on target (except I would never wear cutesy retro frames if I didn't actually have terrible vision).

I know we're supposed to be making fun of them, but their outfits are really adorable!

I mean, look at this. (5 seconds later, she pulls out a ukulele).

I will never not love a furry vest.

Seriously, those are awesome. They also look like they'd be perfect for one of those Roy Lichtenstein-inspired Halloween costumes.

Okay, one more pair of tights

Now, these ones kind of remind me of that brick game that used to come on phones before things were in color. Also loving her dolman-sleeved sweater, fringed scarf, black mini, and statement belt.

Her hand is partially covering it, but it reads "Célfie."

All great, but I saved the best for last: