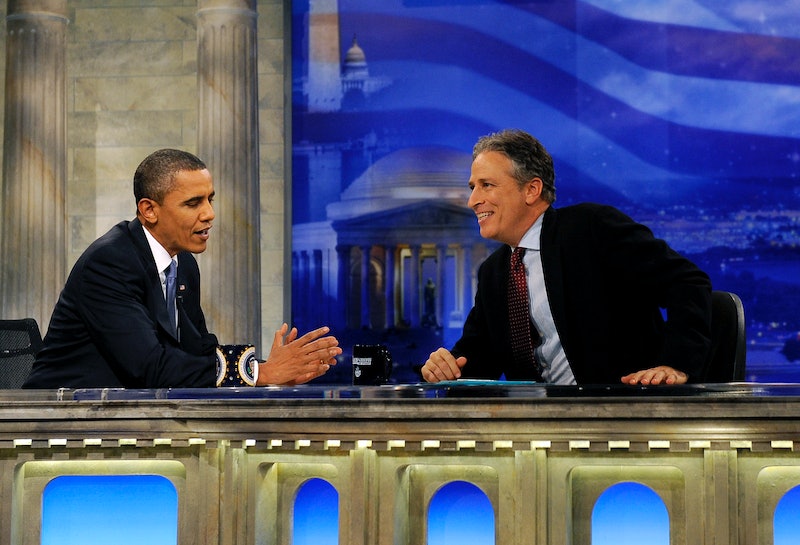 Have you been missing some smart, funny daily commentary on the news this summer? More specifically, have you been missing The Daily Show and its host, Jon Stewart? If the answer is a resounding "yes," then you've probably been wondering, "when is The Daily Show returning to Comedy Central with brand new episodes?" Fear not, as you won't have to wait much longer — just until Tuesday, Aug. 26.

Still, that could feel like forever. In a summer that's been rife with national news — the Ferguson coverage and the way the media has handled it (and the way the Ferguson police have been handling the media) — necessitates a Daily Show treatment. With what's going on in Gaza, and with ISIS's incredibly disturbing leak of James Foley's beheading, we need daily news treatments from places other than traditional news sources. We need Comedy Central, stat.

Fortunately, Last Week Tonight's John Oliver has been giving us weekly input on HBO — for instance, his segment on police militarization was not just funny, it was necessary — but Comedy Central's Daily Show needs to return and give us our nightly opportunity to have a chuckle at how absurd our news can be.

Because most of the time, it's the absurd, or it's the satire, that gives us the most truthful news of all.

More like this
At 14, Kate Berlant Had A Wheelie Backpack & One Line In 'Lizzie McGuire'
By Samantha Rollins
Olivia Rodrigo’s Song Dedication To 5 SCOTUS Justices Sent A Strong Message
By Grace Wehniainen
6 Mind-Blowing Fan Theories About How Stranger Things Will End
By Kadin Burnett
Emilia Clarke Shares More Details About The New 'Game Of Thrones' Series
By Maxine Harrison
Get Even More From Bustle — Sign Up For The Newsletter