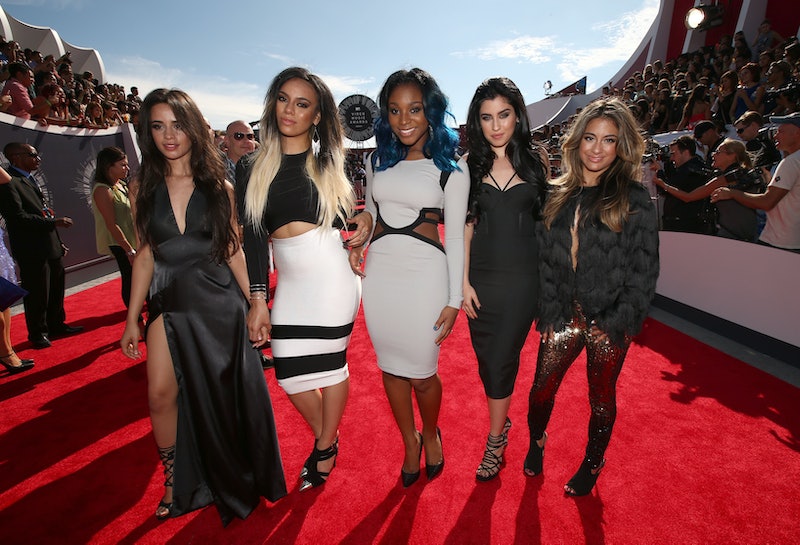 UPDATE: Fifth Harmony took home the award for "Artist To Watch." Making this accomplishment even greater, Fifth Harmony is the first girl group to win a VMA since 2008! Way to go, ladies.

EARLIER: Every year, the Video Music Awards pre-show is a great way to get excited for the actual show — we all get the chance to watch artists who are up-and-coming perform. (Well, maybe it's not fair to call them up-and-coming. They're already here!) Still, the pre-show performances foreshadow who could be up on the main stage next year. After all, Ariana Grande performed at the VMAs pre-show last year, and she's likely to steal the show this year. So, see? It's just an extra excuse to listen to great music. It's like the appetizer before the main course, and really, who doesn't love mozzarella sticks? And, in 2014, this year's mozzarella sticks (okay, this metaphor is getting weird) were Fifth Harmony, who performed their latest single, "BO$$" at the VMA pre-show.

In case you aren't already a fan of the group founded on X Factor, the band's girl-power anthem is filled with quite a few pop culture references. Some of them are on point: "You're talking to a lady / I want a Kanye not a Ray J." (I'm sure Kim K loved that one!) And others fall a little flat... Isn't Michelle Obama known for way more than her dollar bills? Let's give the First Lady more credit than that.

Regardless, the girls were excited and energetic as they danced around in matching white outfits. It was obvious they were having a great time, so that's all that matters, right? Plus, the lyrics spoke for themselves. They were "C-O-N-F-I-D-E-N-T" as they sang, "That's me, I'm confident / Don't want yo compliments / Use common sense."

It may have felt like the performance was over before it started (and it might have felt like an update of what En Vogue already delivered back in the '90s), but that's okay. Especially since Fifth Harmony's performance is the only the beginning of an exciting night for the group. The ladies are nominated for the "Artist to Watch" award at the actual show. And if that's not enough, 5H's new album on the way in October, so we'll be seeing a lot more from these girls!