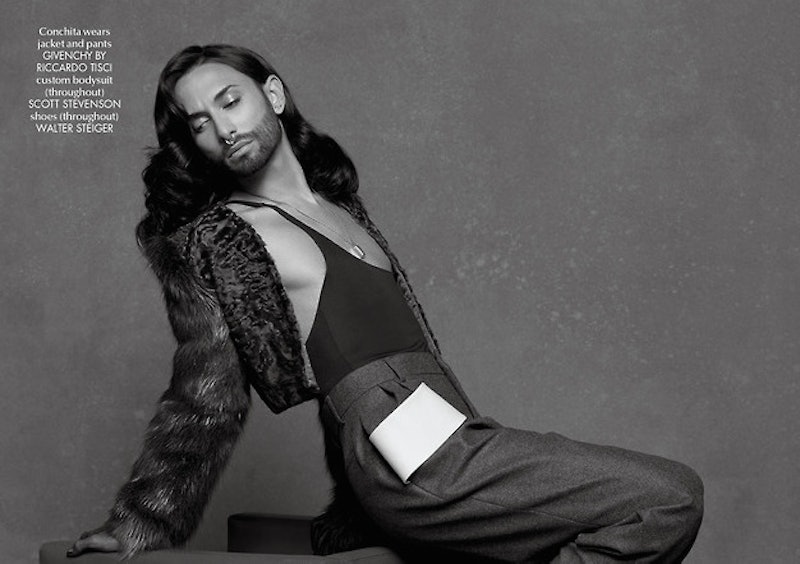 "Being normal" in all its various stages is officially Fall 2014 Fashion's theme. Gap's latest campaign urges customers to dress normal and now The Gloss reports that CR Fashion Book's latest magazine spread features two models that are being deemed "The New Normal" — drag queen Conchita Wurst and model Ashleigh Good, who is looking quite pregnant. It's fantastic.

CR Fashion Book's magazine spreads are typically more out of the box than traditional glossies. This is the magazine that propelled North West's modeling career when it featured her in a black and white photo dressed head to toe in Chanel (iconic purse included).

Karl Lagerfeld shot the photographs, but it wasn't his first time working with Good. He chose Good to end his Fall 2014 haute couture runway show a month ago in Paris dressed in a gorgeous wedding gown designed for a pregnant bride. Wurst has also done her fair share of modeling, walking in Jean-Paul Gaultier's Fall 2014 haute couture show. The magazine seemed to think these two were perfect to pose together for the spread, and I couldn't agree more. According to CR Fashion Book, "Her music and 'drag-to-riches' story have captured many, which is why she — along with pregnant model Ashleigh Good — were chosen to represent the emerging fashion icons of today."

In the black and white photos, the duo are dressed in the same clothing and posed in the same positions, but in different shoots for a seriously cool look. The opening shot on the website features both models topless wearing matching headpieces, ruched skirts, mesh gloves, and holding blazers.

It was already clear that Lagerfeld was a fan of Good, but according to the site it appears he is also quite taken with Wurst as well. According to Karl Lagerfeld, Conchita “gives new meaning to the term drag,” CR Fashion Book reported.

The World According to Karl shares some amazing Lagerfeld-isms and his views on Conchita giving new meaning to the term drag and the emerging fashion icons of today prove that the world according to Karl is very bright as well as quite progressive. Check out more from the spread on the magazine's website. I happily wait with bated breath to see what the magazine comes up with next.