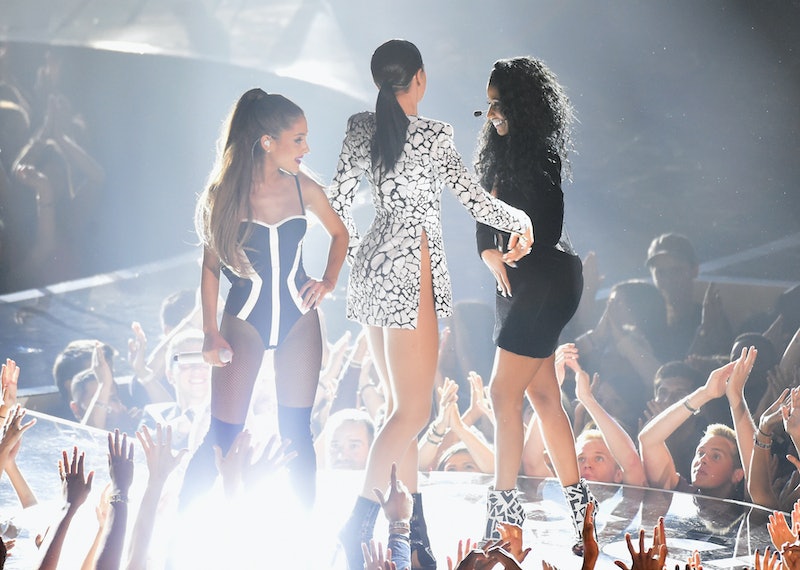 The VMAs pretty much always provide ample water cooler talk (or standing by your locker and dreading going to class talk, depending on your age), and this year was no exception. All the performances and strange outfits may have even distracted you from catching a big reveal that came during the show, but on the Internet rather than on TV. As MTV kindly mentioned before the VMAs began, the video for "Bang Bang" by Jessie J, Nicki Minaj, and Ariana Grande premiered online during the show.

If you had high expectations for this video, you were completely right in your feelings. This song is like the new "Lady Marmalade" if Pink, Lil Kim, Christina Aguilera, and Mya had actually used original music. (OK, who am I kidding? No collaboration can beat that.) But seriously, three huge pop stars coming together for one super catchy song, means an epic music video needs to follow. Plus, do you know these women's track records? Nicki Minaj just released "Anaconda," the most butt- and product placement-tastic video that the human race has ever seen. Ariana Grande released "Problem" this summer which is a visual assault best described as '60s mod meets Britney Spears. And as for Jessie J, well, she's more popular in the UK, but I do know that this is the woman who once wore this:

This trio makes for the perfect storm of music video craziness which is why it's great the video for "Bang Bang" didn't disappoint.

We have Jessie J leading a summertime dance party in the street, Ariana Grande in a room that looks like a motel room/neon sign shop, and Nicki Minaj arriving via helicopter. Finally, three minutes into the video, we get all three ladies together. This is a collaboration! Why must we wait so long for the colorful outfits and pose-dancing?!

Not to say that Jessie J breaking into an impromptu dance routine was disappointing; quite the contrary. It made me wish dancing in the street was more socially acceptable. But, when all three get together the party really starts. The entire city turns a hot pink glow and a fiesta on a helipad begins. (It's no doubt sponsored by Beats by Dre — there is ample product placement because it literally follows Nicki Minaj around.)

The entire thing can best be described as fun and summery. It seems these gals are making a last minute move for Song of the Summer, and they make a pretty damn good argument for taking that spot.

More like this
What Is Ariana Grande's Net Worth? When It Comes To Money, She Has No “Problem”
By Hugh McIntyre
Drake’s Surprise Performance With The Backstreet Boys Was Fans’ Fire
By Stephanie Topacio Long
Cardi B’s New Single “Hot Shit” Features Kanye
By Alyssa Lapid
You Might Want To Rewatch 'Elvis' For This Britney Spears Easter Egg
By Grace Wehniainen
Get Even More From Bustle — Sign Up For The Newsletter