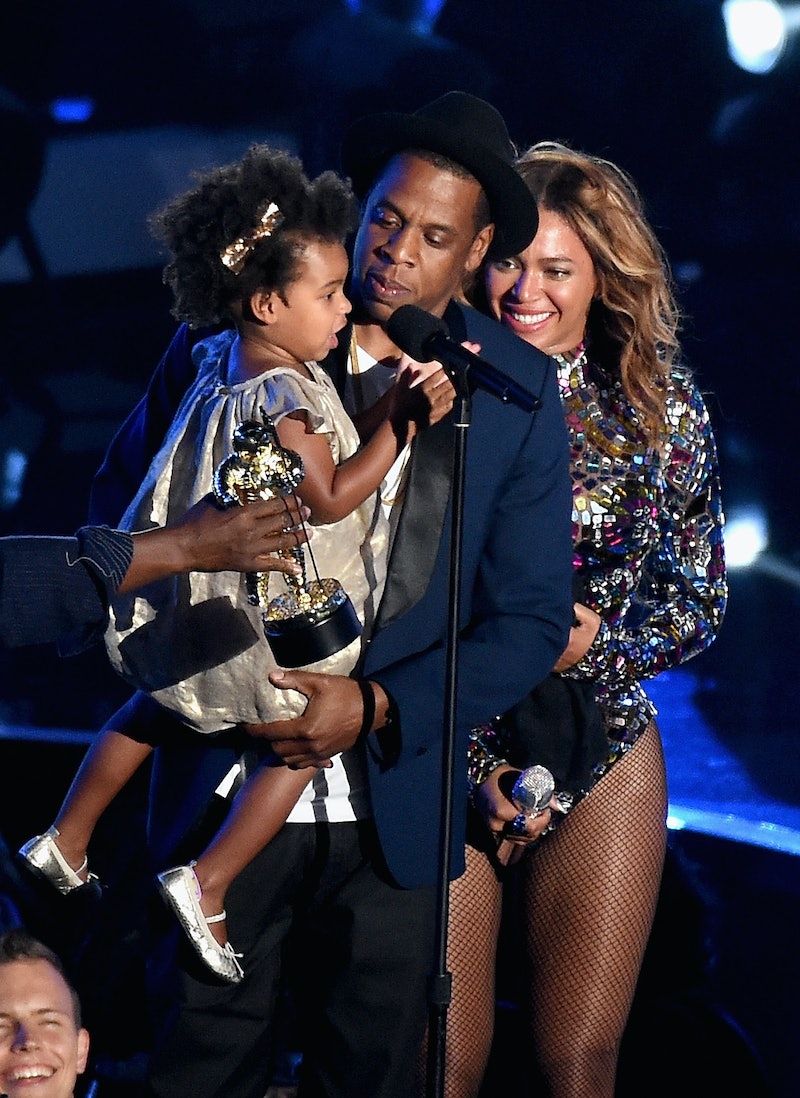 Even if you think you have some sick dance moves, you have nothing on music royalty’s little one. If you haven’t heard, Blue Ivy Carter’s VMA dance moves will pretty much show you up. Of course, that’s no surprise coming from Jay Z and Beyoncé’s progeny. Her mama did single handedly — Ha! Pun! — make the "Single Ladies" hand wave a thing. At Sunday night’s MTV Video Music Awards though, Blue Ivy pulled out all the stops — well, as many stops as a 2-year-old pull out while being propped up by her famous father, that is. Seriously, I can’t tell what’s cuter: Blue Ivy dancing and clapping and along or Jay Z’s surprised and genuine expression when he realizes his daughter’s excited to hear her mommy perform.

But hey, I’m not alone in feeling lame with my two dance moves (one being the "Macarena," the other being the sprinkler), because Blue Ivy broke the Internet Sunday night with her adorable toddler antics. She even won some fangirling respect from the likes of pop stars Taylor Swift and Katy Perry, who were also at the awards show but were forgotten because they are neither related to the Knowles-Carters, nor did their mother win the Video Vanguard Award. Seriously, what else happened at the VMAs? Ariana Grande was there I think. Nicki Minaj performed "Anaconda" or so I heard. I was too distracted by Baby Carter.

Let's see how the wee bae performed as far as popularity pitted against some of the other VMA highlights. As a point of reference, we'll use this Vine which has over 9 million loops and is still growing. Look at how fast the number is going up! (Of course, because Vines loop and Instagram pics, for instance, can only be liked once, the numbers don't add up exactly. But still, 9 million is seriously high even if every person watched it four or five times.)

A pic Kim Kardashian posted on her Instagram of her VMA outfit only got 515K likes. You'd think that the Selfie Queen would have this down pat, right? Well that's peanuts compared to Blue.

MTV posted the "Anaconda" singer's dress incident on YouTube, but it only has 13K views. There once was a time when an audience would gasp at this, but we're more taken in by a dancing baby these days.

Only 241 retweets on this report about Katy Perry's matching denim outfit with her VMA date Riff Raff. As great as nostalgia is, it sure couldn't match Baby Carter's metallic dress obviously.

Miley Cyrus' date, Jesse, a young homeless man, giving her acceptance speech and talking about homelessness was moving, but this tweet from Entertainment Tonight about the event only got 496 retweets.

Taylor Swift's First Time Performing "Shake It Off" on Stage

A replay of Taylor Swift's first time performing her new single is only at 336 retweets the day after on MTV's official account. As retro cool as the perfromance was, Blue Ivy pretty much pwned the new pop song.

So how did Blue compare to Mama Bey? A photo of the Queen's VMA performance posted on her own Instagram only got 797K likes, which is still high but isn't even close to the amount of viewership her baby girl got, showing us that we're just crazy in love with Jay and Bey's little one as the Carter's clearly are.

More like this
Twitter Is Having A Meltdown Over Buying Beyoncé Renaissance Tour Tickets
By Jake Viswanath
Beyoncé Just Announced Tour Dates: Here's How To Cuff Tickets To Her 2023 Shows
By Jake Viswanath
Lizzo Calls Beyoncé “The Artist Of Our Lives” During Her Grammys Speech
By Alyssa Lapid
The Beyhive Is Mad At Harry Styles After Beyoncé’s Album Of The Year Snub
By Jake Viswanath
Get Even More From Bustle — Sign Up For The Newsletter
From hair trends to relationship advice, our daily newsletter has everything you need to sound like a person who’s on TikTok, even if you aren’t.