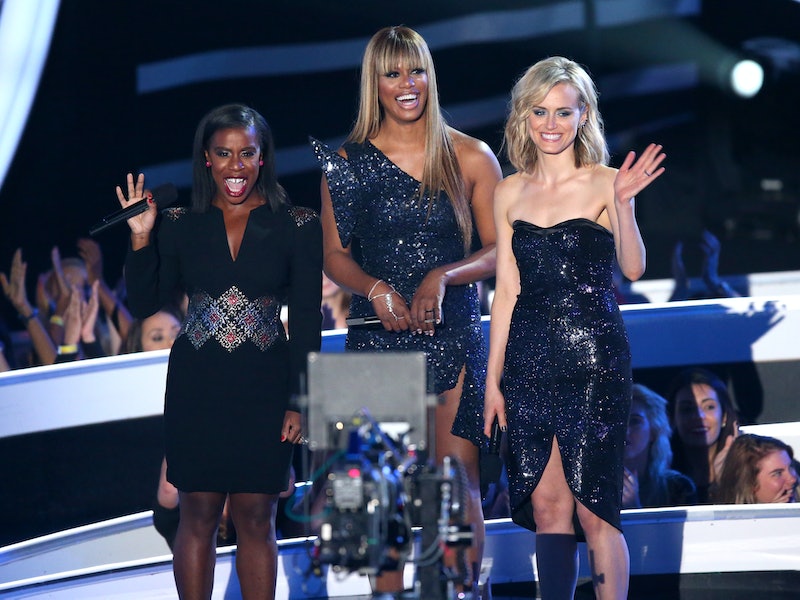 There's a clear hierarchy in the world of acting: first come films, then theater, then TV. Commercials hardly even rate. They're the parts people play before they become famous, so you rarely see your favorite stars during commercial breaks. But during the Emmys telecast, Ricky Gervais suddenly appeared in a commercial when many viewers were probably about to head to the bathroom or to grab more wine. Gervais, who stars in the Netflix show Derek, appeared in a commercial for his network, pretending to jump into Lilyhammer, House of Cards, and Orange Is the New Black, and interact with cast members of each show. Gervais is funny, of course, but once he got in a room with Taystee (Danielle Brooks) and Crazy Eyes (Uzo Aduba, who won an Emmy just last week), he was immediately shown up by these talented comedic actresses.

Gervais, wearing iconic Litchfield Prison orange, sauntered into the sleeping area, where Taystee and Crazy Eyes were playing chess. He immediately did the one thing all viewers know not to do: start a confrontation with established inmates. Then Gervais taunted Taystee for her "attitude." Mistake number two, tough guy. But the ladies got him back, mocking his English accent and his pronunciation of the word. Aduba, as per usual, stole the scene, going full Crazy Eyes and yelling what every viewer was thinking about Gervais's biography: "Ain't nobody care!" Making his first smart decision of the commercial, Gervais quickly exited the scene.

Funnily enough, this is not the only commercial currently airing that stars a member of the OINTB cast. Samira Wiley, who plays fan favorite Poussey, can be seen in a PayPal commercial which also aired during the Emmys. The commercial, perhaps in a subtle nod to the show Wiley's known for, touts PayPal's strong security measures. It also mentions ninjas.

So why is Wiley, who was just upgraded to a series regular for Season 3 of OITNB, appearing in ads for a digital monetary service? Well, in fact it's not that rare for famous actors to shill things on TV — most of the time it's just high end products like makeup, perfume, or fancy clothing companies. But the OITNB cast is in constant flux. It's a large ensemble where no one is indispensable, so the actors have to be on the lookout for work in case their part gets cut or reduced. That hasn't happened to Wiley yet, but maybe she just wanted some walking around money. Can't no one fault her for that, especially considering how few parts are available for black females on TV, even in 2014.

Whatever reasons Aduba, and Brooks had for choosing to act in a commercial, it is undeniable that these are some funny ladies. Despite being relative newcomers to the world of TV, they instantly outshined Gervais, who's been a comedy icon for years. Aduba in particular is wonderful at sending up her own character, as she did at the VMAs on Sunday night as well. Whatever the OITNB cast is in, they manage to make viewers laugh. I'd throw my pie for them any day.