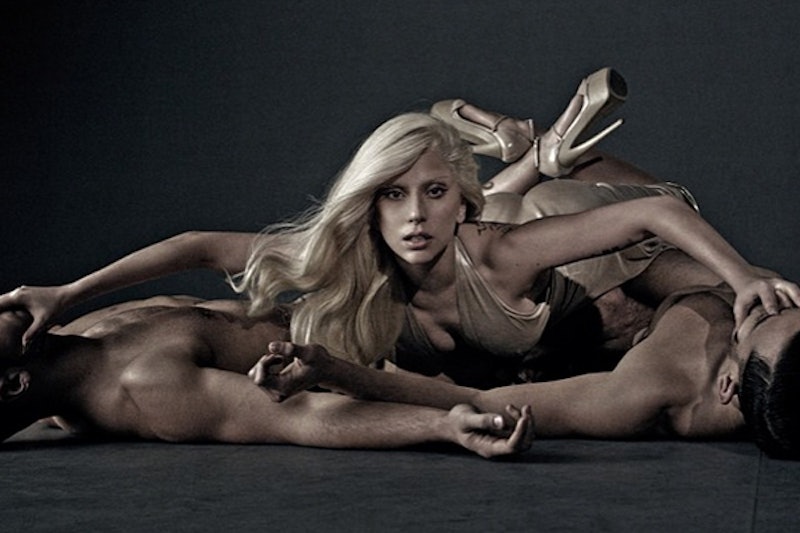 Celeb scents are so common now that they're essentially the basic bitches of the beauty industry. But leave it to Lady Gaga to always do something different with her celebrity perfumes. While her first fragrance, Fame, was black in the bottle but clear when it hit the air — and tagged as unisex — Lady Gaga's latest perfume, Eau De Gaga, is decidedly unisex, so it's not really a perfume or a cologne — it's both! Or neither? Whatever, it's cool.

So while Justin Bieber, Taylor Swift, Katy Perry, Britney Spears, Nicki Minaj, and Jennifer Lopez all have perfume portfolios with at least two or three or 15 offerings, Gaga's work in the scent sphere is slow and steady, as well as deliberate and dedicated to being unique.

Eau de Gaga, which Gaga teased via social media and with photos earlier this month, is touted as a fragrance for the adventurous women and the men who love her in the marketing (art)p(r)opaganda, and will land at retail on January 15, 2015. So if you're a Little Monster and you get a lot of gift cards over the holiday season, you can use one of them to buy this if you are a fragrance junkie. Eau de Gaga will also be available at discount mass retailers, as opposed to prestige department stores. You can grab it at Kohl's, Walgreens, Sears, and Target among other locations.

The Eau de Gaga bottle is black and meant to mimic both masculine and feminine aesthetics, design-wise. It's stark and sleek and lacquered in black, like a latex catsuit Gaga herself might wear. It's also simple and unfussy and will look great on top of anyone's dresser. The velvet box it's packaged in is pretty swaggy, too.

So now that we know what the artful bottle looks like, how about what's on the inside?

The fragrance is a woody floral, with notes that include white violet, sparkling lime, and leather. From those notes, you can assume it's going to be bold, like the septum-pierced person after which it's named. Lime and leather, huh? That sounds a little like the title of a Gaga song, right? "Glitter and Grease" is one of her early (and most awesome) compositions, for those keeping score at home.

While Fame is also technically listed as a unisex scent, it smelled more femme-friendly to my nose. Its genderless nature was also overshadowed by the fact that the liquid was black. I can't help but think haters will note that Gaga doing a unisex scent nods to those obnoxious rumors about her being a hermaphrodite and the fact that Gaga often dresses androgynously.

One of the campaign images features Gaga laying atop hard male bodies, digging her fingers into their eyes, which shows the strength of her femininity. Of course, she is looking all feline and sexy, wearing a pair of killer heels in a nude hue; like duh, since Gaga doesn't wear flats!

Remember how her Fame fragrance saw her naked and covered in tiny men, Gulliver's Travels–style?